America and the Great Disappointment

He's proud of cutting the budget at expense of poor and at no cost to corporate America. What will Obama say next? 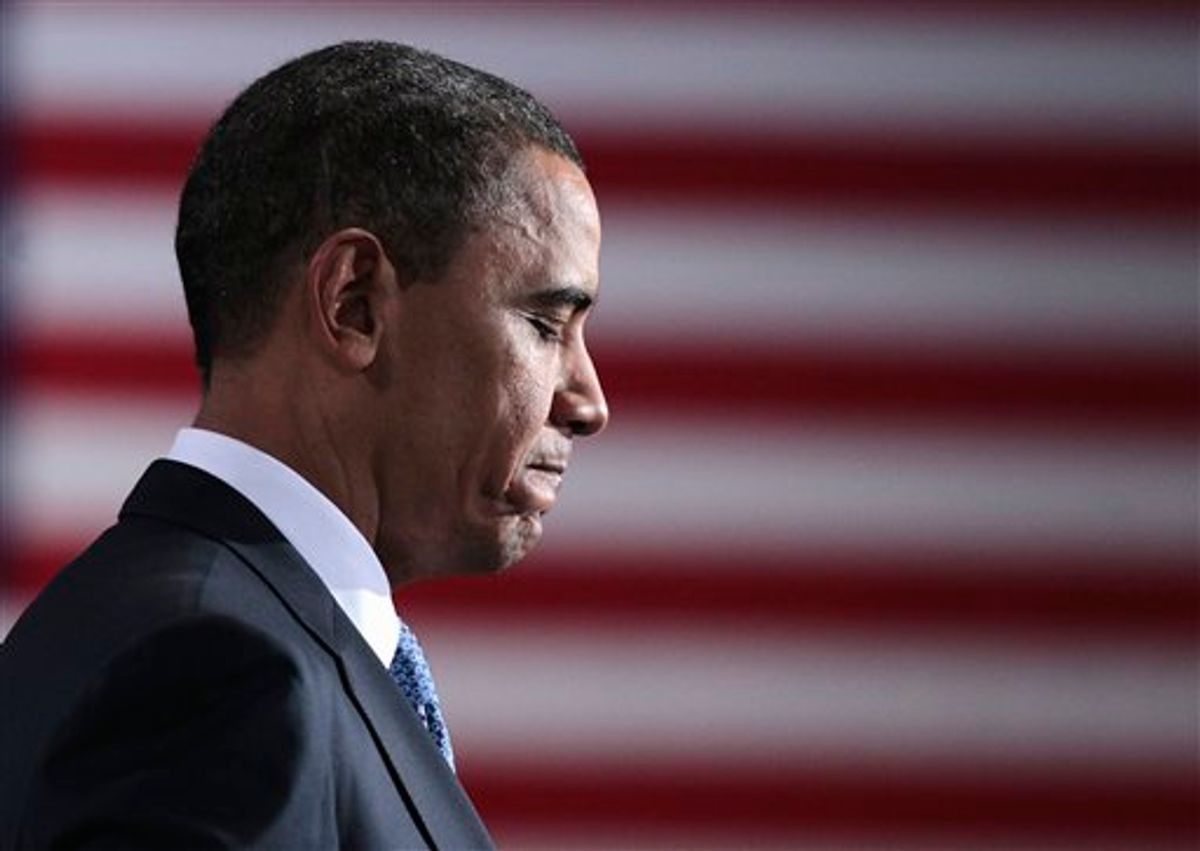 I was considering having myself dusted with ash and measured for sackcloth last week, so many are the current predictions of impending apocalypse.

There's the contingent that follows the ancient Mayan calendar and predicts the end of the world on Dec. 21, 2012, some of whom have made bad movies about it. Others believe the Rapture arrives even earlier -- next month, in fact, on May 21. You can see their billboards announcing Judgment Day along major U.S. highways and their squadrons of RV's making the rounds of American cities, spreading the news.

Of course, this isn't the first time the planet's End of Days has been anticipated. You'll remember the Y2K hysteria in the months before the year 2000 arrived. An even greater panic -- albeit without the stockpiling of batteries and freeze-dried pizza -- allegedly consumed Europe prior to the first millennium, in 1000. (One story claims that at the stroke of midnight the entire terrified population of Iceland converted to Christianity. That's what I call a baptism by fire.)

Here at home, in the 19th century, Baptist preacher William Miller said our collective tickets would be punched on Oct. 22, 1844. Earth's failure to oblige that day became known as the Great Disappointment.

"A lot of times these prophecies gain traction when difficulties are happening in society," Loyola University in New Orleans professor Catherine Wessinger told the Associated Press. "Right now, there's a lot of insecurity, and this is a promise that says it's not all random, it's part of God's plan."

So if God's plan calls for the Rapture on May 21, how come the Republicans moved the date of their first presidential candidates' debate from May 2 to Sept. 14? Do they know something we don't know? Because otherwise, it sure seems they're doing their best to speed us on our way to the eve of destruction.

Last week's government shutdown threat was just their latest attempt to send us spiraling further into a morass of inchoate discontent and outright hostility to the plight of those in need, not to mention endangering an economy in fragile recovery. Attaining $38 billion in budget cuts at the expense of the poor and no cost to corporate America, it is, as President Obama himself said, "The biggest annual spending cut in history."

At the same time we were inflicted with House Budget Committee Chairman Paul Ryan's "Path to Prosperity," a long-term budget proposal that would slash $6.2 trillion over the next decade, take money away from education and alternative energy investments, privatize Medicare, cut healthcare services for seniors and the disabled, radically alter Medicaid, but keep funding a bloated defense industry, subsidies for oil companies and tax breaks for the nation's richest.

Just to rub it in, the cover of the April 7 edition of Bloomberg Businessweek touts "The Billionaire's Guide to Paying No Taxes" and announces, "The More You Make, the Less You Pay." Reporter Jesse Drucker writes, "For the 400 U.S. taxpayers with the highest adjusted gross income, the effective federal income tax rate fell from almost 30 percent in 1995 to just under 17 percent in 2007, according to the IRS. And for the approximately 1.4 million people who make up the top 1 percent of taxpayers, the effective federal income tax rate dropped from 29 percent to 23 percent in 2008. It may seem too fantastic to be true, but the top 400 end up paying a lower rate than the next 1,399,600 or so."

Ryan's proposal is magical thinking at its worst, a hocus-pocus of numbers adrift from reality. In its initial analysis the Congressional Budget Office found that after 10 years, increases in the deficit because of tax cuts would exceed the savings from Ryan's spending reductions. At that point the debt predictions improve, but only because if his Medicare privatization becomes reality "most elderly people would pay more for their health care than they would pay under the current Medicare system."

It ignores the fact that millions of Americans can't find jobs, that hunger is mounting and foreclosures are rising, that we're engaged in three overseas combat operations (wars!) at the same time, and our national infrastructure is crumbling.

And yet, the Democrats go into battle against all of this armed with feather dusters, barely putting up a fight. We'll see what happens when President Obama addresses the nation Wednesday night, but note that all of this takes place as Obama sets out to procure a billion dollars for his reelection campaign. According to the Wall Street Journal, at a meeting in Washington last month his campaign manager "asked 450 donors to raise $350,000 each by the end of 2011." That money ain't coming from car washes and bake sales.

Several Democratic and progressive organizations have announced their intention to take advantage of the Supreme Court's Citizens United decision allowing massive and frequently anonymous corporate campaign contributions -- the decision those same folks attacked so vehemently during the midterm elections and ensuing Republican victories. The Los Angeles Times reminded us of what the president said just last October: "The American people deserve to know who's trying to sway their elections, and you can't stand by and let the special interests drown out the voices of the American people."

Why is there no general outcry, no outrage beyond that of the committed few? That's the real Great Disappointment. Are we just too busy struggling with our individual lives or have we been lulled into anesthetized, otiose complacency by an overload of Internet stimulus, reality television and the pursuit of happiness via Facebook and consumer goods? Have our shortened attention spans dulled our willingness to engage in any kind of debate?

Meanwhile, a new CNN poll has blow-dried bloviator Donald Trump tied for first place among potential Republican presidential candidates. And the New York Times says Arizonans are painting their front lawns green rather than be fined by homeowner associations for unsightly brown grass. The trend began when real estate agents sought to enhance the curb appeal of foreclosed-upon and abandoned properties.

Good grief. Maybe it's the End of Days after all.