The virtual girlfriend: Fantasy or nightmare?

Cloud Girlfriend is a buzzy new high-tech companion. We take a look at the genre's fascinating, disturbing history 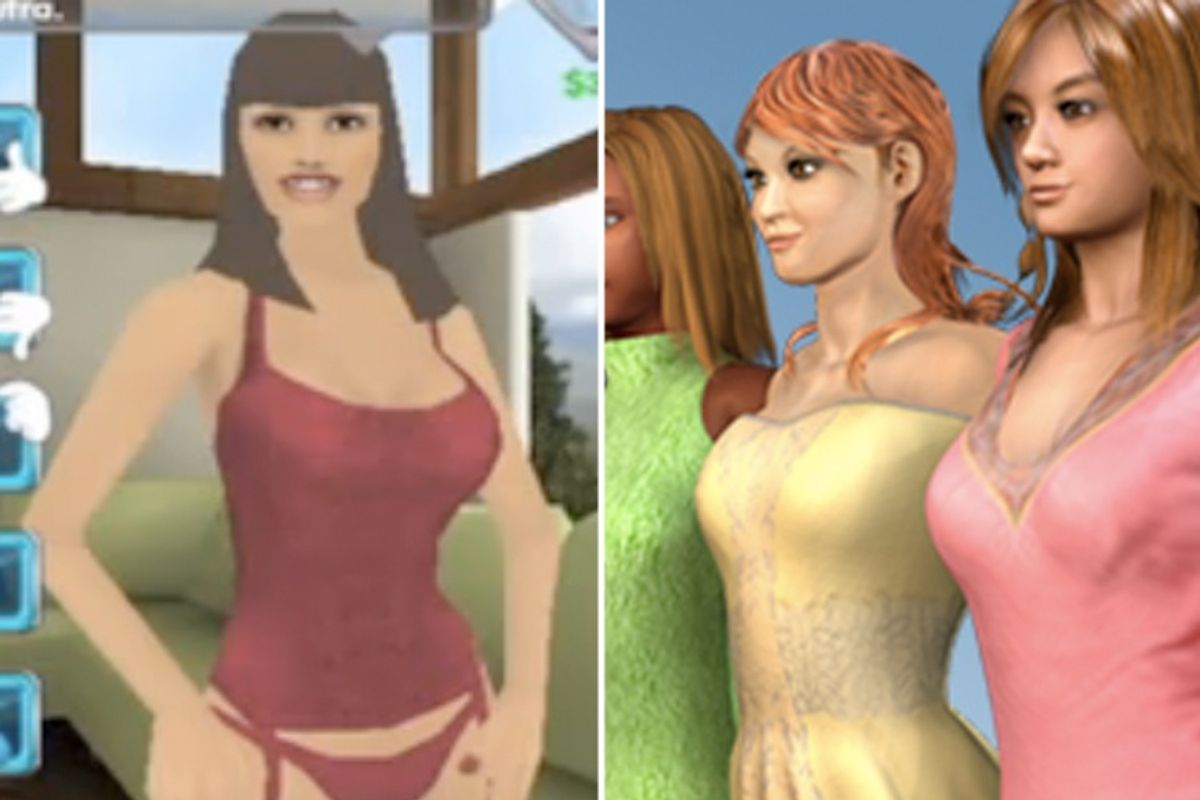 A sampling of virtual girlfriends
--

Meet the next virtual girlfriend: The announcement of Cloud Girlfriend, an app designed to publicly flirt with users on Facebook, has had tech bloggers in a tizzy for nearly a month. Now that it has an official release date (April 26) and a cost (free), it's due time for us to take a closer look at "her" and, more important, what the fantasy of a virtual girlfriend says about us.

David Fuhriman, CEO of Cloud Girlfriend, says the product isn't just about entertainment and escapism; he sees it as a training ground for relationships: "Like the saying goes, 'Practice makes perfect.' [It] can help people come together and practice managing a real relationship -- and then take it into the real world." You know, like a Tamagotchi is to pet ownership, a virtual girlfriend is to dating. OK, so that might seem a dubious claim -- real-life interactions are an entirely different beast from status updates and "pokes" -- but these days so much of even our real-world relationships are managed virtually. As Fuhriman points out, a relationship with Cloud Girlfriend is like the increasingly common long-distance relationship (minus the Skype sex). This all brings to mind an article I read the other day about virtual therapy, where the patient talks out his or her problems with a sophisticated avatar capable of mirroring body language, engaging in basic conversation and, most important, asking a series of probing questions. Therapists are also using virtual simulations to help patients through social phobias.

It isn't just the potential entertainment or therapeutic value that has people wound up over Cloud Girlfriend. After all, the Web is already full of virtual girlfriends. There are iPhone apps and interactive games of all flavors. That's not to mention the phenomenon of Love Plus, a game for Nintendo DS that allows players to maintain a relationship with, creepily, young teenage characters. The game is so popular in Japan that a resort town dreamed up a special vacation package for fans to have a romantic getaway with their pixelated lovers. The game also led to the first marriage between a man and a virtual woman. And then there's the most popular virtual lady of all: free Internet porn.

What makes Cloud Girlfriend different and, apparently, more enticing is the potential to convincingly present oneself as something you're not: a stud with a pretty, doting girlfriend. The appeal isn't limited to those capable of deriving satisfaction from interacting with an avatar; a virtual Facebook girlfriend is, as with most things on the social network, largely about self-presentation. In addition to public online flirtations -- which are meant to make the bachelor look more appealing to potential partners -- Fuhriman is working on developing software that allows users to superimpose their image on a photo of their fake ladyfriend. It might seem too good to be true: Some suspected it was an April Fool's joke since it was announced in late March; others pointed out that Facebook's terms of service ban profiles generated by bots. But Fuhriman explained that real women will be managing the profiles and taking responsible for the digital flirtations. However, he insists that it "is not a sex chat or pornography service." That raises the question: Why not just do it yourself -- create a fake Facebook profile for your dream girl and then fabricate interactions on your real profile?

The thing is, I suspect the buzz over Cloud Girlfriend has less to do with the app's actual utility and far more to do with the desire, and fear, that it taps into. We're more connected, and yet more isolated, than ever. The hyped future-is-now remedies for carnal loneliness -- like sex robots and teledildonics -- have inspired disappointment, and often repulsion. This is a time of fantasy fulfillment and disenchantment -- and what represents that better than a lover who is real to everyone except oneself.