When we were strippers

On the stage, I learned to cultivate a persona. But backstage, among the women, I found something more valuable 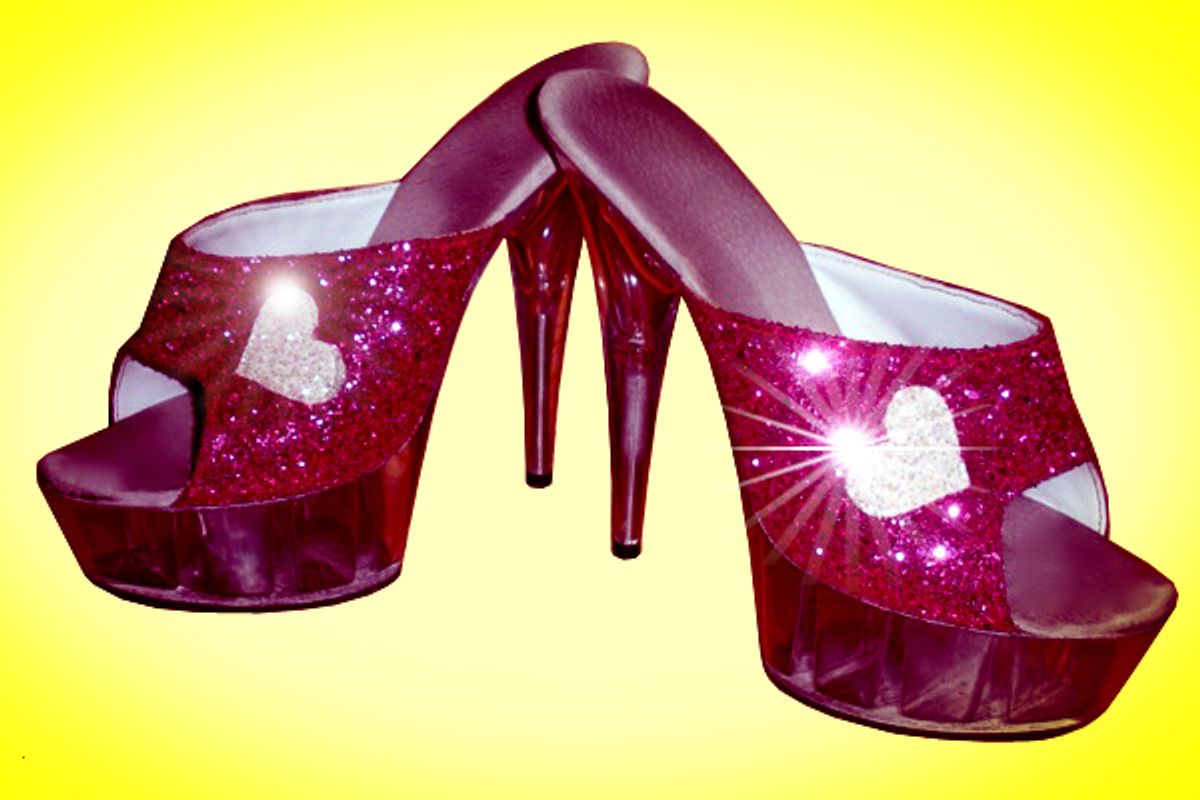 They came from a trashy store on Hollywood Boulevard, the shoes, but the first sight of them spun me back to an infamous strip club in San Francisco. Clear Lucite platform heels -- a stripper wardrobe staple, they were comfortable and, in a sleazy way, quite practical. But it was the pink glitter accented with the sparkling white heart appliqué that sold me. They looked like something an O'Farrell girl would wear.

The Mitchell Brothers O'Farrell Theatre, in San Francisco's rundown Tenderloin district, was most widely known as a post-Flower Power bohemian hangout, where Hunter S. Thompson and other margin-dwelling luminaries would drop by to smoke pot and play cards with owners Jim and Artie Mitchell. I was never invited into the boss's office with Jim and Artie, though -- Jim was in prison for killing Artie with a rifle blast by the time I signed on to dance there.

Despite its old-school hippie associations, the O'Farrell Theatre was avant-garde in its elegance. It was the first strip club I saw that could authentically be described as beautiful, the crown jewel of the club's many rooms being New York Live, where dancers would perform two-song sets bathed in a body-caressing pink spotlight on a gorgeous polished wood stage. Watching dancer after dancer sweep across that stage, her costume, mannerisms and music perfectly coordinated, I knew that in order to fit in and pull down significant cash, I would have to make an effort; I would have to put together something resembling a show. Under the older dancer's tutelage, I learned to kick off my thong and catch it in one hand, how to flip upside down on the brass poles, and how to cultivate a workable persona. I wasn't the sweet one, the popular one, the exotic one or -- let's be frank -- the gorgeous one. I was the aspirational arty girl (still found today in clubs, wearing glasses with her Catholic school girl costume). For all the coaching, my costumes remained lame, hastily assembled affairs. Ambivalent about stripping, I was reluctant to commit to investing in decent gear. Why wear sparkling pink when scuffed, secondhand black would do? That final layer of professional polish evaded me.

So a few years later, when I snuck back into the business to write about it and needed to costume myself again, I couldn't resist the shoes. By stripper standards, they were strictly utilitarian, but they felt like an homage. A shot at image rehab. A shot at stripper redemption.

If the New York Live stage was the elegant face of the club, the dressing room was the heart. Any businessman, Japanese tourist, curious married couple or sex-positive feminist could sit in the New York Live audience and lay down singles and plaudits, thinking they were part of the scheme, but the dressing room was sacrosanct. Strippers Only. Our job requirement was to be someone unreal, a hyper-sexualized girl who danced and deferred, but in the dressing room, we could be ourselves, neither distorted by fantasy nor brutalized by judgment. We could fix our makeup, wiggle our toes, count our money, goof around and just talk.

When you came in at the turnover between the day and night shifts, you'd save your spot at the red melamine dressing room counter by scrawling your stage name on the mirror in lipstick. Girls could leave out their custom-order rhinestoned gowns, their Borghese makeup cases, everything but tips and wallets, a remarkable contrast to dressing rooms at shadier clubs where even dirty panties would get stolen and the most you'd dare let lie around was a busted-up curling iron or your $3 Wet 'n Wild powder compact.

What made that dressing room so special was that it was infused with the sex industry's scarcest commodity: trust.

That trust fortified us against the seamier aspects of the job: the cover stories quickly conjured to sustain a double life, the burnout, the dirtbag customers who thought it was OK to show up for a lap dance with reeking hair and wandering hands, management favoritism, and ever-changing, ever-more-demanding club standards. There was something reassuring about slumping onto a dressing room stool on a bad night, tossing a fistful of sweaty singles on the red counter and groaning, "Oh my God," and a girl inspecting her tan lines at the full-length mirror would roll her eyes and say, "I know, right?"

Not every dancer could armor herself through camaraderie, however. I saw women positively implode, from drugs, the weight of deadbeat lovers, or death by a thousand surgical cuts, like one girl, who at 23 had already had a phenol peel on her face and showed up to work a week after having her breast implants swapped out for the third time, strange incisions below her nipples bound up with clear suture like fishing line.

At 26, I forced myself to move on from the O'Farrell, feeling ancient and emotionally exhausted by an elemental sex work paradox: It's hard to feel like you're simultaneously above the job and trapped in it.

Starting with a single phone call a couple years ago, one reconnection led to another, and now dozens of us are back in touch. Turns out tragic endings have been few and far between -- in fact, the most jarring loss was Jim Mitchell himself, who died of heart failure in 2007. Since our dancing days, we've gained husbands, partners, kids, careers, college degrees, spiritual practices and homes, each wild child all grown up. I'm proud that our lives are so blessedly ordinary because what we have now is more fulfilling. Because after years of toiling in chaos, we deserve this peace. Because we survived. I will never look back on stripping as the best days of my life, but these women and I shared a unique crucible, strangely glamorous yet impossible to glorify. And our youth? We burned it at both ends, cowboy.

How funny that, of all my stripper memories, the club I most vividly remember is not the notorious establishment in which I worked, but the sisterhood that formed inside it. In a business built on fleeting fantasy and illusion, that kinship is the one thing that has lasted over time.

The shoes maintain permanent residence in my stripper trunk now stowed in the basement. Once in a while I take them out, put them on and do a turn or two. The pink glitter sparkles in the light that shines through the windows of my suburban home, the click of Lucite heels on the hardwood floor an elegy. Like stripping, the shoes are horrible and brilliant, tacky and gorgeous, dangerous and common, and, still, irrefutably part of who I am. I will never throw out these shoes because they remind me of the women who inspired me to buy them. These shoes remind me that before they walked into history, they stood for something real.