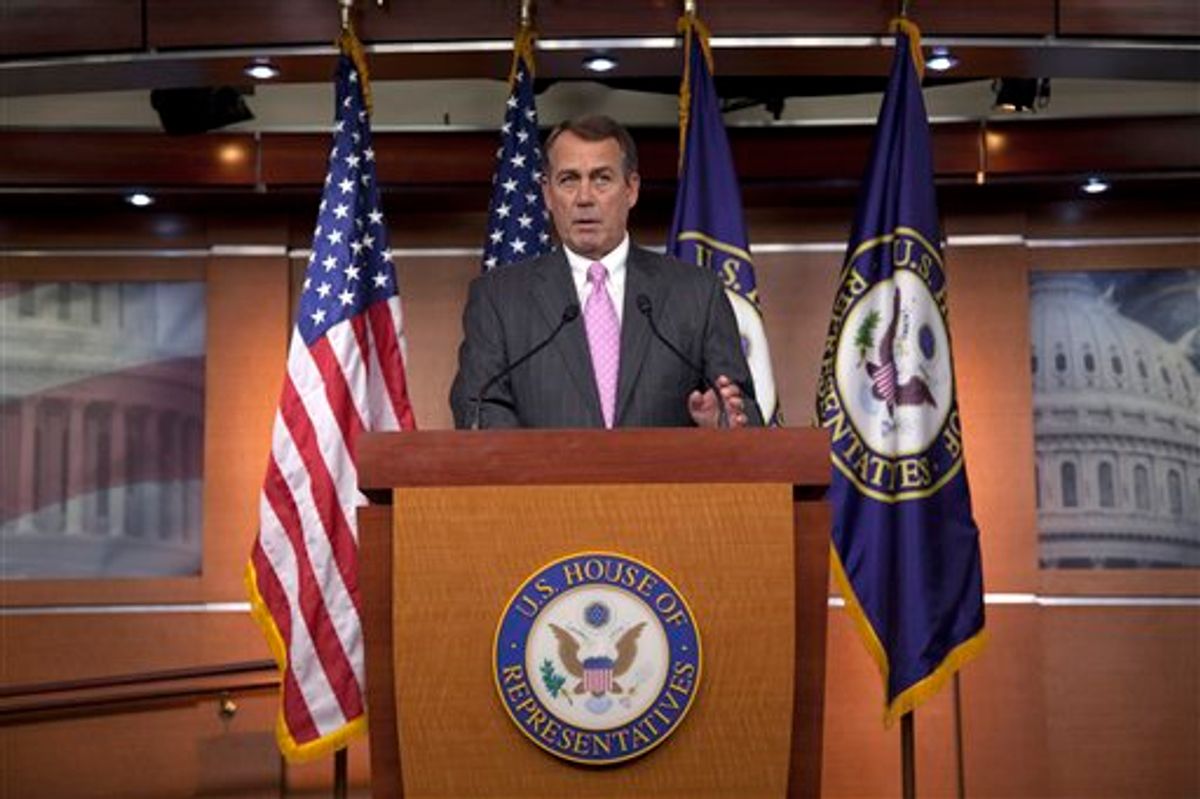 On a bipartisan vote, the House Thursday passed a yearlong government funding measure cutting $38 billion from the budget and closing out sometimes quarrelsome negotiations between the Obama administration and Republicans dominating the House.

The measure passed by a 260-167 vote in which 81 Democrats made up for defections from dozens of GOP conservatives, many elected with tea party backing. The Senate was poised to vote later Thursday and the president has said he'll sign it into law.

The bill cuts community health programs, grants for state and local police departments, the Environmental Protection Agency and community development grants, a favorite program with mayors of both political parties

Republicans conceded the measure -- a product of negotiations between the White House, House Speaker John Boehner, R-Ohio, and Democrats controlling the Senate -- was hardly perfect. Its savings are considerably less than the $60 billion-plus in cuts that Republicans muscled through the House in February. But they said it reverses the ever-upward course of spending.

"It stops the bleeding. It halts the spending binge and starts us moving us back in the right direction," Boehner said. "Does it cut enough? No. Do I wish it cut more? Absolutely."

The Senate was standing by to complete work on the bill later in the day and send it to Obama for his signature.

Some Republicans have expressed concern since learning that the bill would cut less than $1 billion from this year's deficit, but Boehner preferred to focus on the long-term implications of the measure -- and a vote tomorrow on a 10-year GOP budget blueprint that promises $6.2 trillion in savings below Obama's February budget.

"If we pass this bill, Washington will spend $315 billion less than it's currently on track to spend over the next ten years," Boehner said of Thursday's vote. "It's that simple," adding that the broader GOP budget is "the plan that will take us where we truly need to go."

The long-overdue, shorter-term measure would fund the day-to-day budgets of federal agencies through September. Later in the day, Republicans dominating the House will launch debate on a 2012-and-beyond plan that promises to cut the long-term budget blueprint Obama laid out in February by more than $6 trillion.

The 2011 spending measure produces its $38 billion in cuts to domestic accounts by including almost $18 billion changes to benefit programs, like children's health care, highway funding and a fund for crime victims. Many of those cuts, however, would have little to no impact on the deficit.

The pact was reached last Friday just hours before a government shutdown. It's a split-the-differences agreement made after a much more stringent version passed the House in February.

The bill cuts $600 million from community health programs, $414 million from grants for state and local police departments, and $1.6 billion from the Environmental Protection Agency's budget. Community development block grants, a favorite with mayors of both political parties, take a $950 million cut. And construction and repair projects for federal buildings would absorb an almost $1 billion cut.

High-speed rail grants would be cut back by $2.9 billion, while liberals decried cuts to a program that provides food aid to poor women and their children.

"This bill is nothing more than a tea party checklist targeting programs that help the most vulnerable," said liberal Rep. Barbara Lee, D-Calif., ticking off cuts to food aid for the poor, grants to local police departments and help for children of inmates. "It's shameful, a moral disgrace."

But the measure would have little direct impact on the deficit through the Sept. 30 end of the fiscal year, according to the Congressional Budget Office, since about $8 billion in immediate domestic program cuts are more than outweighed by increases for the Pentagon and ongoing war costs.

Later Thursday, the GOP-dominated House will kick off debate on its long-term budget plan, a measure promising stiff cuts to domestic agency budgets that total $1.8 trillion over 10 years.

The GOP measure, a non-binding blueprint that sets a theoretical framework for future legislation, would also sharply cut Medicaid and transform it into a block grant program runs by the states. It doesn't touch Social Security, however, or immediately cut Medicare.