How I almost lost my marriage in a war zone

As a Times correspondent, Ian thrived on danger, but the job he loved was tearing our family apart 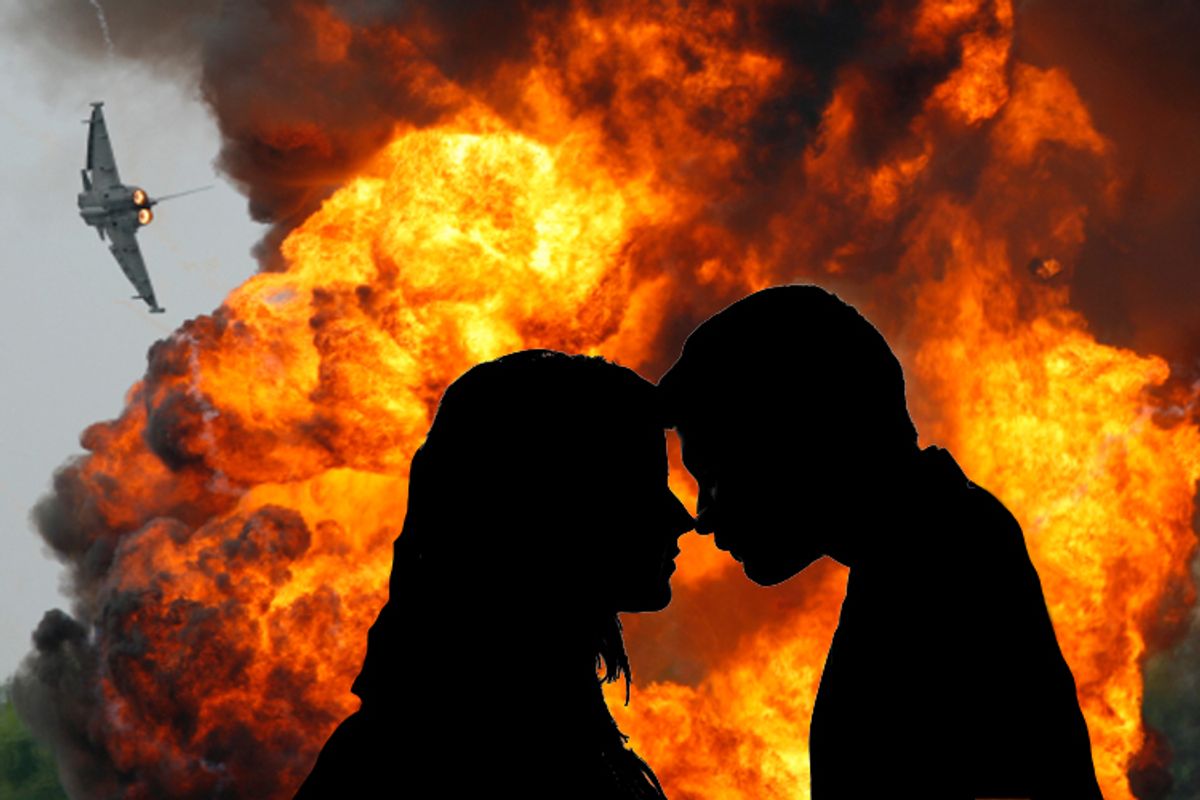 We were based in Prague in 2004 when our older son, Malcolm, then 5, started to put into words the low-grade anxiety we were all living with then. As I walked him to kindergarten one morning, he pointed to a huge muddy hole freshly dug by a gas or electrical company.

"Mama," he asked, "is this the spider hole where they found Saddam Hussein?"

At the time, my husband, Ian Fisher, was a war correspondent for the New York Times, and Prague was a place he would come to visit and do his laundry rather than live. His life was in Iraq, sometimes Afghanistan, Gaza, Macedonia, Congo and Somalia. Pretty much anyplace people would run from, he would run toward. After four contractors were killed in Fallujah -- the real beginning of the insurgency in Iraq -- he left our vacation in Egypt early to go report the story despite journalists being increasingly targeted by kidnappers. Not long after Danny Pearl was beheaded, he went on assignment to Pakistan.

Meanwhile, I lived with the constant fear that something bad would happen to Ian, a gnawing feeling that this was not a normal way to live. I asked myself the same questions: What made Ian risk his life repeatedly to get a story? Was it an addiction to danger? Was it the need to tell the truth no matter the circumstance? Was it bravado, fun, ego gone mad, like Col. Kurtz, gone into the jungle and unable to return? That didn't jibe with Ian, the gentle homebody who loved being with the kids and me.

But Ian was gone for long stretches, up to nine months in one year, and he was missing chunks of our children's childhood. The day Malcolm took off riding a bicycle without needing his daddy to hold on to the back of the seat, Ian was incredulous.

"Malcolm, where did you learn to do that?" he asked.

"From TV," Malcolm yelled proudly as he flew past.

Ian laughed, but he was crestfallen, his role as dad supplanted by the small screen.

My younger son, 3-year-old Nelson, could not speak English, because he heard it only on the rare occasions Ian was in town. I am Czech, and we had decided to raise our kids bilingually, but it was heartbreaking to hear Ian talk to Nelson on the phone:

"How are you Nelsie?"

As the wars went on, I found myself distancing myself from Ian emotionally, a defense mechanism to shield against the possibility of losing him. I had twisted fantasies about what I would do if he were killed. There was something perversely satisfying about imagining that I could survive, even thrive, without him. I kept hearing the line from a book I once read in the back of my brain: "Damaged people are dangerous. They know they can survive."

Sometimes I think if we didn't have the kids, our relationship would not have lasted. The children were the putty between our cracking tiles.

Our phone conversations became strained and awkward. While in the field, Ian would call me with hair-raising stories. He's not a cowboy, but he needed to unload all that he had witnessed.

"I took the boys to the doctor today," I'd say. "Then I went to Ikea and finally bought a couch. You?"

"Today was awful. There was this little boy that had just been killed by a stray bullet while sleeping on a balcony outside because of the heat. His dad asked me, 'Do you want to see my boy?' They unwrapped him from inside a carpet. He had one bullet hole under his belly button, and his little boy body reminded me so much of Malcolm's. "

"That's so awful," I would say, or utter some other inanity that could not adequately express empathy for the horror Ian had just described.

On another day, he told me this: "We were ambushed on the road from Baghdad to the Jordanian border. One guy pointed an AK-47 at my head and they took everything. Luckily they didn't find my American passport. That would have been bad."

What do you say to that? "Oh, yes, well, my day is going swimmingly over here. I burned the soup, other than that nothing particularly interesting to report."

Now imagine years of these long-distance conversations. Where the mundane is dwarfed by the horrific. Where the crackling, echoing line of a satellite phone is your only contact. When the normal back-and-forth of a marriage -- asking whom we should invite for dinner when he's back on the 16th and what we should serve -- was ridiculous.

Even harder were the times when he came home. The boys and I had created efficient and comforting routines around Ian's absences, which included snuggling up in bed together at night, hunkering down. Then Ian would arrive to this "idyllic" picture of two healthy, happy kids, with food in the fridge, a hot shower at the turn of a button, having just been transported from a place where he saw scared, haunted children, burned-out villages, scattered body parts, women traumatized by loss of family or honor.

And instead of feeling relieved at his presence, I felt angry and resentful.

I was exhausted by single parenting, constant worry and loneliness. But part of me felt ashamed, too, like I had no right to complain, given where Ian had just been and what he'd seen. Ian, in turn, longed for empathy and affection.

Our needs were so raw, and our expectations of each other so high. Of course we fought. By the time we slowly relaxed into our old routines as partners and parents, Ian would have to start preparing for his next assignment. And the unsettling feeling of waiting and worrying would take up its usual place in my belly.

Even as I was questioning Ian's choices, I found myself defending him to other people.

"Why is he always putting his life in danger?" went a typical complaint from my friend. "He has a family to think of."

"Because it's an important story," I would always say.

It's a question I'd always duck. "I find the word 'happy' weird. What does that mean anyway?"

That would be the end of it, but Prague is small. I knew what they were saying behind my back. "He must be having an affair."

And I suppose he was -- with war. So intense and fickle and seductive, engaging all the senses, every moment made more meaningful by danger and death. Or at least that's how I imagined it.

Malcolm started asking unsettling questions. "Is daddy going to die, Mama?" he asked one day. "My friend Jackson says there's a war in Iraq and daddy's in Iraq." (Thanks, Jackson's parents.)

Don't make your spouse into your psychoanalyst, a brochure for war correspondents advised. But in reality, when people come back from a terrible place, they need to talk. And very few will take the problems to a shrink; it may be seen as a sign of weakness. Plus, one of the tricks of PTSD -- and for journalistic accuracy I should note that my husband refuses to say he has it, explaining it's a technical medical term with specific symptoms he emphatically claims he never had -- is to make many war reporters and photographers believe that they are above it all, not affected by what they've seen. They are just reporting. Not their war!

I had what I like to call related PTSD. I will readily admit to all its symptoms: night sweats, insomnia, repeat nightmares. I caught it from my husband (though he didn't have it, of course -- maybe he was just a carrier?). I caught it from the news. And I knew that if we kept passing the virus back and forth, we would succumb and our relationship would die in a war zone not of our making.

So when Ian was offered the juicy posting as Rome bureau chief, I said I would go under the condition that it not become another jumping off point to the Middle East. The boys were getting older and harder to fool. And they needed their dad around. He promised. There was the dying Polish pope and the bottomless thirst of Times readers for all things Italian to keep him Rome-bound. We moved. Three months later he was asked to do a rotation in Iraq. He asked me if he could go. Just this once. Please? It's an embed, he pleaded, totally safe.

But I couldn't do it anymore. I was done. Ian passed on the rotation. I still don't understand fully why I let him do it all those years, to be honest. Maybe part of me was addicted to that moment when he walked in the door, unharmed. With Rome's magnificent ruins serving as our backdrop we moved on to the next challenge: figuring out if our relationship, lived so long across continents, could adjust to life lived together, in one place. It was a painful and painstaking process, but we did it.

It was only recently, when four of Ian's colleagues were kidnapped in Libya, then released battered but alive, that he finally said to me: "I am so glad you stopped me from doing this."

Selma Kalousek lives in Brooklyn, NY with her husband Ian Fisher and their two sons. A photography editor by profession, Selma has spent the last year writing a screenplay, "Boxes," a romantic thriller about love, war and the human need to wage both.