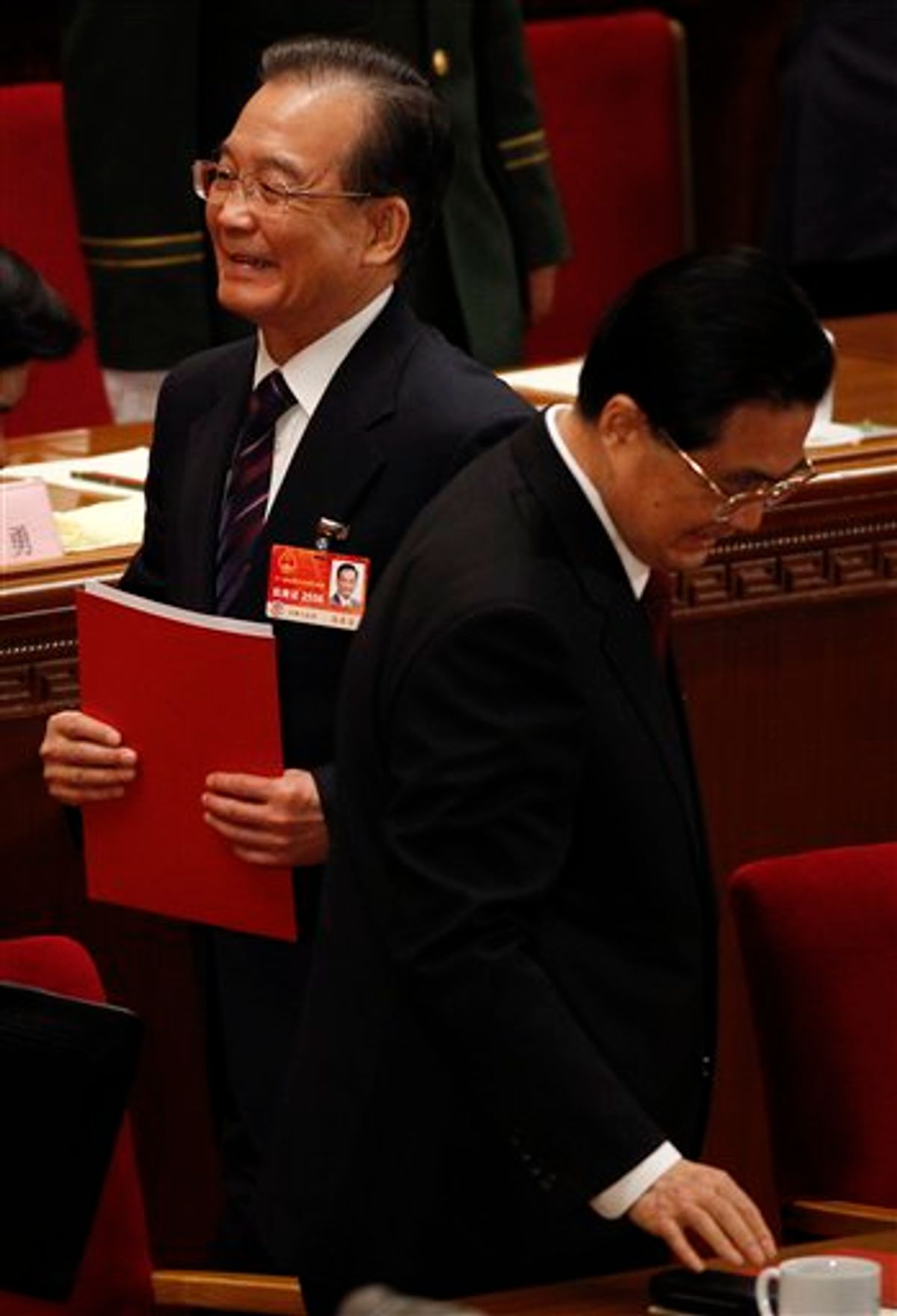 China's foreign reserves have surged past $3 trillion, driven by exchange rate controls that Washington and other governments say distort trade and are hampering a global recovery.

The announcement Thursday indicates Beijing is still intervening in markets to control the value of its yuan despite a June pledge to allow more flexibility. That could add to pressure on China when finance ministers of Group of 20 governments meet Friday in Washington to discuss global finance.

The reserves increase as Beijing buys dollars and other foreign currency to restrain the rise of its yuan as export revenues and investment pour into its economy. In freer trading, that flood of cash would push up the yuan's value against the dollar, making Chinese exports more expensive abroad.

Chinese reserves soared 24.4 percent over a year ago to $3.04 trillion at the end of March, the central bank reported. That is nearly triple the level of second-place Japan, which has $1.1 trillion in reserves.

Washington and other governments want an end to China's currency controls, which they say give its exporters an unfair price advantage. They say that swells its multibillion-dollar trade surplus and hurts foreign competitors at a time when other countries are struggling to create jobs following the global crisis.

The International Monetary Fund cited Beijing currency controls this week as a factor that might hamper a global recovery.

"The currency of China still appears substantially weaker than warranted by medium-term fundamentals," the IMF said in a report.

It said that unless Beijing allows a more market-driven exchange rate, "the recovery will stand on increasingly hollow legs over the medium term."

On Friday, G-20 finance ministers in Washington are due to discuss possible financial standards to judge risks in the global economy. That could highlight strains due to imbalances such as China's trade surplus and reserves.

Some U.S. lawmakers want sanctions on China if Beijing fails to act. Pressure for such action abated while the two governments cooperated to end the global crisis but demands have revived as trade recovers.

Many economists expect Beijing to let the yuan rise faster to cool inflation that hit 4.9 percent in February and is believed to have accelerated in March. A stronger yuan would make imported oil and other foreign goods cheaper, easing pressure for prices to rise.

But officials including Premier Wen Jiabao have ruled out a rapid increase, saying that might hurt Chinese companies and cost jobs, adding to social tensions.

The yuan, also known as the renminbi, has been allowed to rise by 4.5 percent against the dollar since June, when Beijing promised more exchange rate flexibility. But in a report in February, the U.S. Treasury complained the pace of revaluation is too slow. It said more rapid appreciation was required.

The makeup of China's reserves is secret but Beijing is believed to keep more than half in Treasury securities and other U.S. government debt.

That has helped to finance Washington's budget deficit but fueled anxiety among Chinese officials about the safety of their holdings. They have repeatedly appealed to American leaders to avoid steps in response to the global crisis that might erode the value of the dollar and China's U.S. assets.

The government has diversified its holdings in recent years, trying to earn a better return by putting some of its reserves into agencies that invest in stocks and other foreign assets.