Some people didn't care for the president's budget address 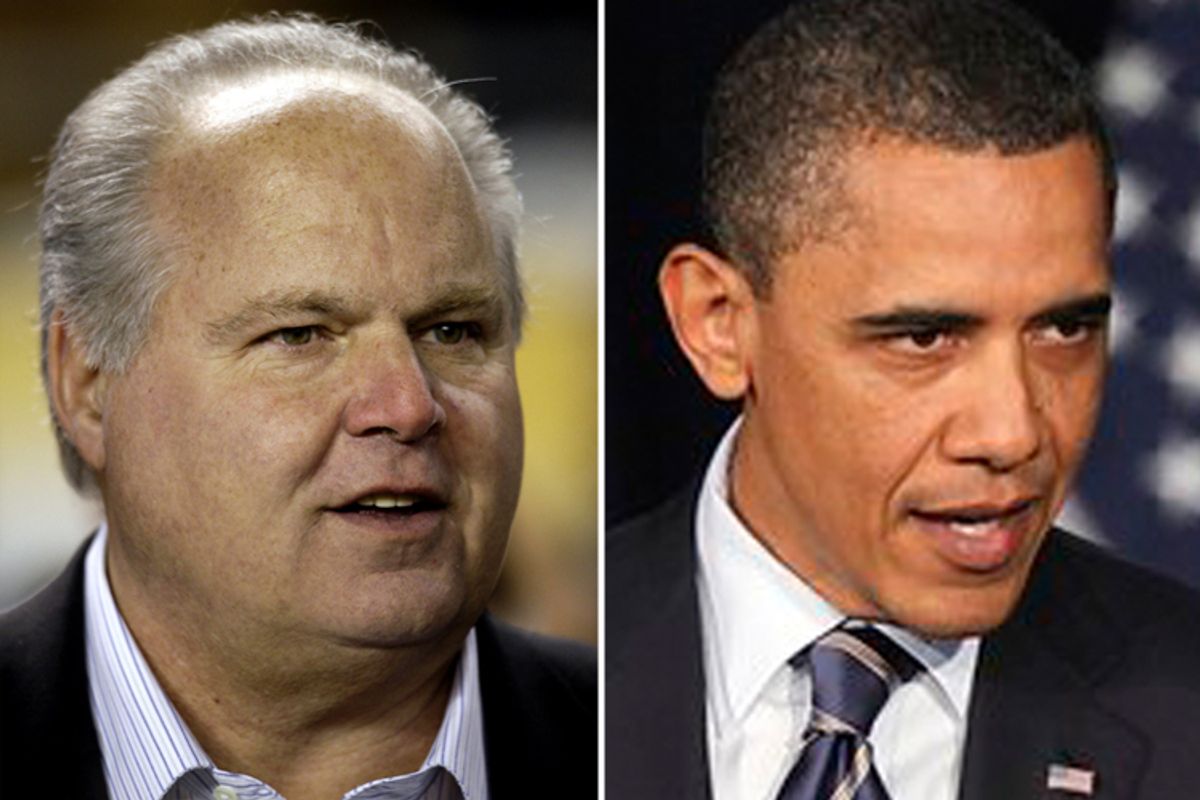 Did you appreciate Barack Obama's speech about the deficit, and the Republican plan to tackle the deficit through the dismantling of the welfare state? Because you shouldn't have. It may have sounded well and good, but it was actually awful demagoguery! And it was so mean!

Obama's speech lasted 45 minutes, and 45 minutes after he concluded, cable news had largely forgotten or stopped caring about what he actually said and began getting into the way he said it and what it "meant" (not what the words themselves meant, but what the act of speaking them itself was supposed to mean) and, hey, Joe Biden fell asleep and here are some Republicans to rebut and did you know there will eventually be an election?

But right-wingers were not so easily distracted. They knew that Barack Obama had done them a grievous injustice by coming out against the Ryan budget plan.

Rush Limbaugh, for one, seemed unhappy that the president didn't acknowledge the benevolent genius of Paul Ryan: "Obama spent 45 minutes vilifying Paul Ryan and 5 minutes on how we all need to get along." I guess the new definition of "vilifying" is "explaining at length why you disagree with someone." He didn't even mention Ryan! Unless there was a bit at the end that I missed where the president said, "Paul Ryan wants to kill your grandmother." (Wait, sorry, that was someone else. Or rather a great number of someone elses.)

Rush wasn't alone! It seemed like everyone on the right -- including Paul Ryan -- seemed a bit peeved that the president didn't explicitly endorse the brutal Ryan budget document and then call Ryan the smartest man in America and our new Secretary of Serious Grown-up Solutions.

One of the phoniest, most demagogic speeches from a sitting US president in recent memory. This after punting on his own budget. A disgrace.

I agree that the Democrats should've passed a budget last year. After that, though, Mr. Hayes loses me.

President Obama's speech today was reminiscent of Stalin’s Order Number 227 to the Russian generals at the Battle of Stalingrad: "Not One Step Backward."

Oh, was it? Was it reminiscent of Stalin's Order Number 227?

The Washington Examiner pointed out that Barack Obama tricked Paul Ryan into releasing his plan first, so that Obama could criticize it -- unfair! -- and, even worse, he "resorted to Huey Long tactics by making a punching bag of 'the rich,' that mythical top 2 percent of all Americans whose wealth the president famously told Joe the Plumber in 2008 that he just wanted to 'spread around.'" Did you know that rich people are a myth?

(Jonah Goldberg made a reference to the television program "The Simpsons.")

Am I missing something? Of course the speech was partisan. It was a president giving a speech about the budget. Do these critics actually think it's unfair for Barack Obama to disagree with them?