Statements last month from the president and his defense secretary about the U.S. role in Libya have not held up 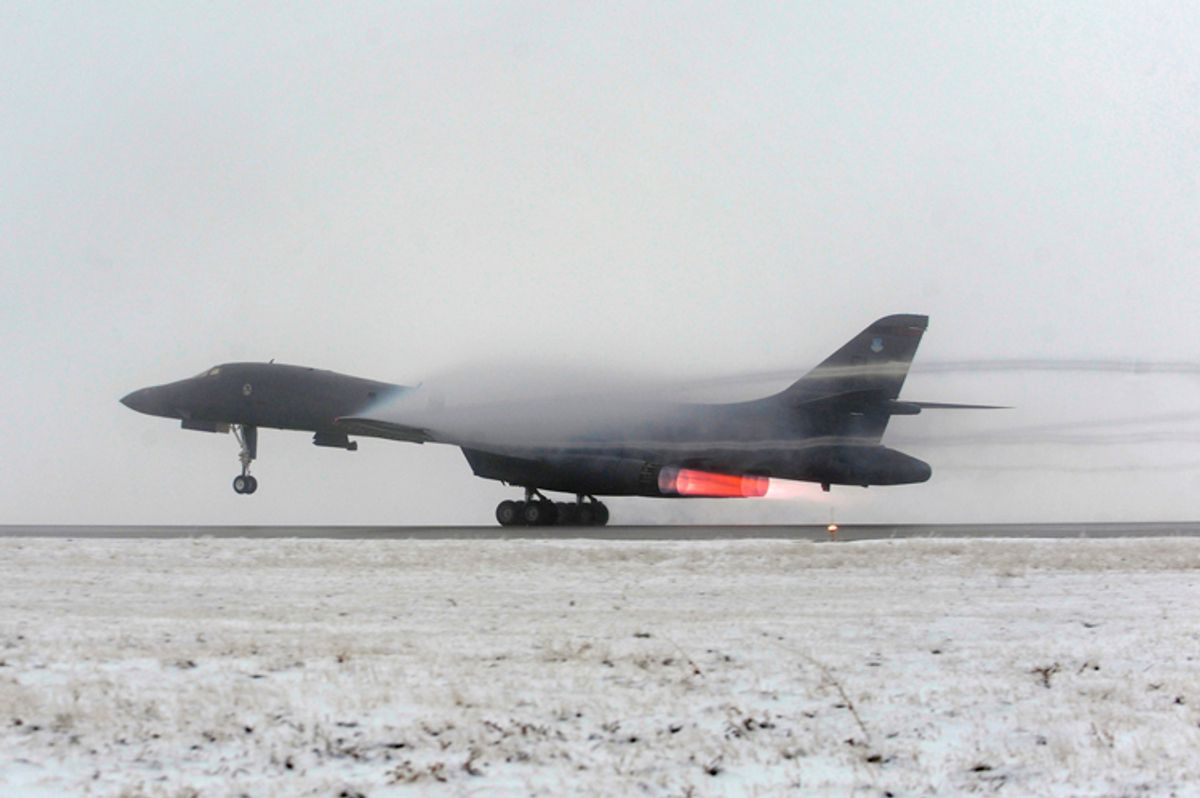 A B-1B Lancer strategic bomber takes off from Ellsworth Air Force Base, in support of Operation Odyssey Dawn in Libya, in this U.S. Air Force handout photo dated March 27, 2011. This mission marked the first time the B-1 fleet has launched combat sorties from the continental United States to strike targets overseas. Picture taken March 27, 2011. REUTERS/U.S. Air Force/Staff Sgt. Marc I. Lane/Handout (UNITED STATES - Tags: MILITARY CONFLICT POLITICS) FOR EDITORIAL USE ONLY. NOT FOR SALE FOR MARKETING OR ADVERTISING CAMPAIGNS. THIS IMAGE HAS BEEN SUPPLIED BY A THIRD PARTY. IT IS DISTRIBUTED, EXACTLY AS RECEIVED BY REUTERS, AS A SERVICE TO CLIENTS (Â© Ho New / Reuters)
--

Libya already seems comfortably ensconced in its position as America's latest forgotten war. But it is worth taking a moment to scrutinize a couple of dubious statements made by President Obama and Secretary of Defense Bob Gates last month about what the U.S. role in the war would be.

This is what Gates told a House hearing on March 31:

We will not be taking an active part in the strike activities, and we believe that our allies can sustain this for some period of time.

At a Senate hearing that same day, Gates qualified that "we have made provision to have our strike aircraft available within a relatively short period of time should it become apparent that the -- that the NATO capabilities are inadequate and another humanitarian disaster -- such as a race to Benghazi -- might occur."

Two weeks later, as Spencer Ackerman points out, this is what has actually happened:

The strike — on portable anti-aircraft launchers — was the third time in the past week in which U.S. fighter jets have attacked Libyan air defenses, the sources added.

It's fair to say that pretty easily qualifies as "an active part in the strike activities." Now, this may be the right move from a military or strategic perspective. But that doesn't excuse Gates' misleading Congress.

Now, here's what President Obama himself said on March 22 about the U.S. role in the war (emphasis added):

And we will continue to support the efforts to protect the Libyan people, but we will not be in the lead.  That’s what the transition that I discussed has always been designed to do.  We have unique capabilities.  We came in, up front, fairly readily, fairly substantially, and at considerable risk to our military personnel.  And when this transition takes place, it is not going to be our planes that are maintaining the no-fly zone.  It is not going to be our ships that are necessarily involved in enforcing the arms embargo.  That's precisely what the other coalition partners are going to do.

The transition to NATO control took place several days after that statement. Fast forward to today and, according to NBC, U.S. planes are still very much involved in maintaining the no-fly zone:

A senior military official said the American warplanes, assigned to NATO, have remained part of the NATO mission since the handoff on April 4. According to the official, "We didn't explain that very well."

The officials insist that these American fighter jets are assigned only to enforcement of the "no-fly zone" and have not taken part in airstrikes against Libyan ground forces. The U.S. aircraft can be used when needed to take out enemy defenses as part of the enforcement of the no-fly zone.

It's hard to read this as anything other than a straight-up broken promise from Obama.