An assault victim sues and calls for a ban on sex offenders. It's a misguided move -- and potentially dangerous 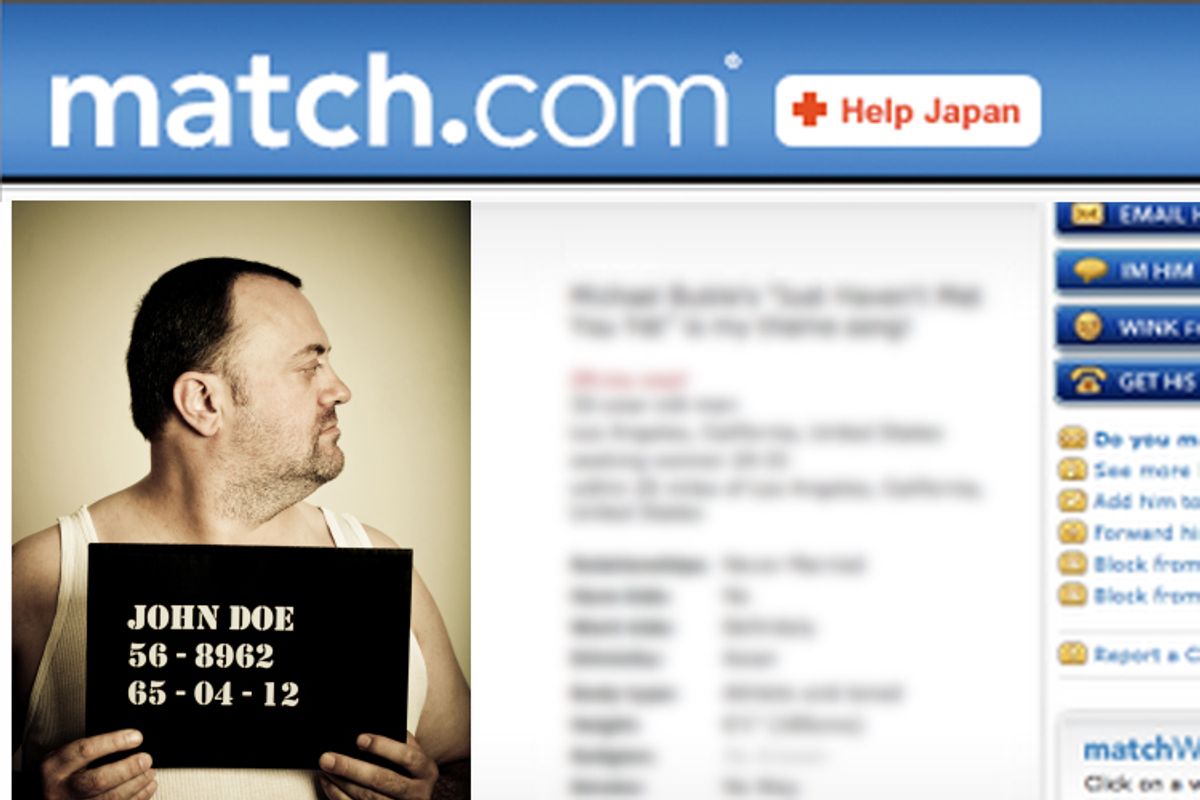 A young Hollywood entertainment executive was charmed by a man she met on Match.com and went on two "pleasant" dates with him -- and then he allegedly followed her home and sexually assaulted her. After the attack she discovered that he had six convictions for sexual battery in Los Angeles County. Now the woman, identified as Jane Doe, is suing the company and calling for it to screen out sex offenders. This case could prove a watershed moment for the online dating giant and the industry as a whole. It's a horrific story and Jane Doe's aim is understandable -- but I'm sorry to say that she's wrong.

The woman's attorney Mark L. Webb explained, "We are calling for reputable online dating sites to consider voluntarily instituting a basic screening process that disqualifies from membership anyone who has a documented history of sexual assault." They are doing more than calling on the sites to institute this policy, though. As the Los Angeles Times reports, her attorney plans to "ask a Los Angeles County Superior Court judge for a temporary injunction barring the site from signing up more members until his client's demands are met."

The first question here is whether it's reasonable to ban anyone on a sex offender registry from Match.com. The truth is that a record only tells you so much. It's unlikely, but a charge of possessing child pornography could stem from something as minor as a high school "sexting" incident. Besides, we already make it hard enough for offenders to reenter society, and further ostracizing them only encourages recidivism.

Also, why limit the background checks to sex crimes? What about people with domestic violence rap sheets? How about murderers -- are they any less dangerous to online daters? Even someone with a DUI in his or her past could pose a threat to your safety. And once you start down that road, why not require Match.com to get friends and relatives to confirm that a person really is as good a catch as they say they are? Should the site be required to check marital records to eliminate husbands and wives who are posing as singles? What about birth certificates to verify that users are really as old as they say they are? Maybe a reference letter from their employer and a bank statement would be good too? Once you start pulling at that string the whole cloth starts to unravel.

It's important to note that just because a guy doesn't have a record doesn't mean he's safe. Not to be a total downer, but sexual assault is by far one of the most underreported crimes out there. It's also the case that many background checks -- especially those done only on a person's name -- omit all sorts of juicy information. Last year, in response to a New York Times article about the scattering of sites offering background checks for online daters, public policy expert Braden Cox wrote, "Although these criminal screenings can help in some situations, they still have some serious shortcomings. They result in false negatives when criminal records don't appear or may not include felony arrests that were plead down to misdemeanors." He continued, "Many counties don't even report their criminal records to a publicly accessible central database." Requiring Match.com to screen users could create a false sense of security that is ultimately even more dangerous.

Instead, the important thing here is to remind everyone that people met online are no safer than those flirted with in a bar or cafe. If the courts have any relevance here, it should be to address why a man with six convictions for sexual battery was roaming free as a bird.