The Pentagon would take on an even greater share of spending. Is this what Americans really want? 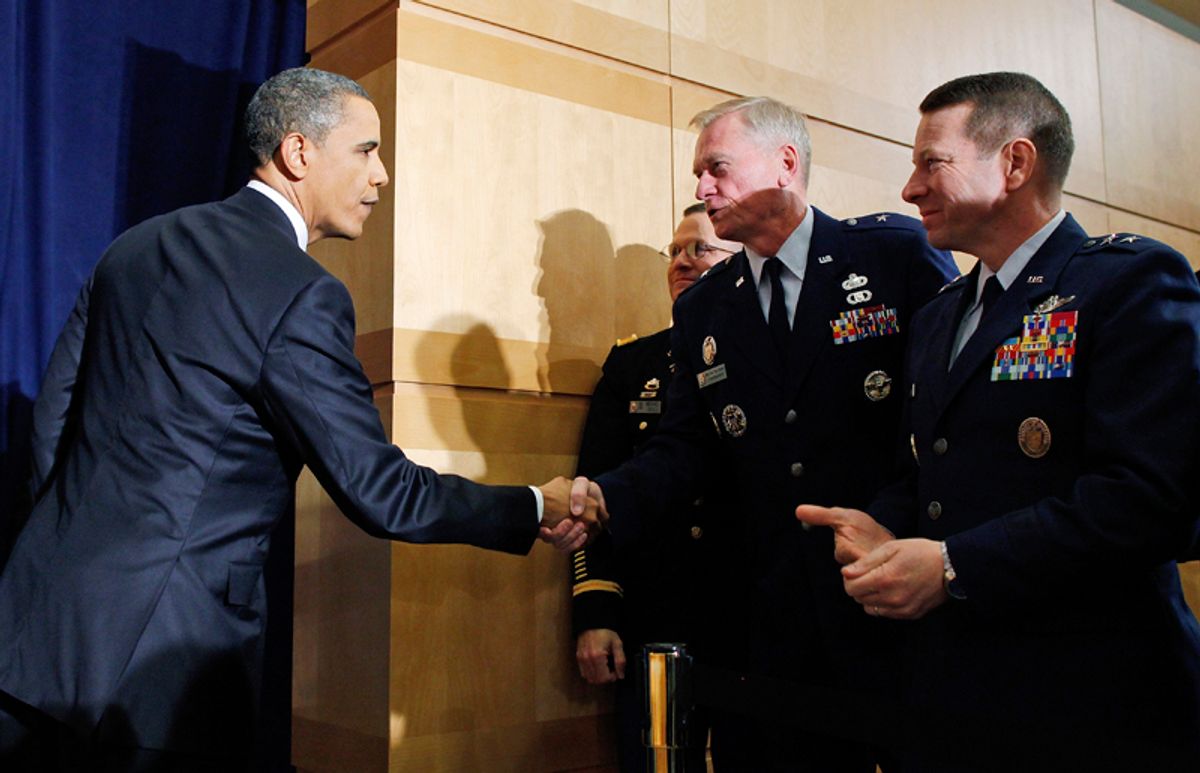 One of the major headlines to emerge from President Obama's debt reduction plan is his proposed $40-billion-a-year cut to defense. For progressives in particular, this is one of the good initiatives in a mixed bag. But most of the Washington press corps has missed the underlying story: The administration's spending cuts would actually make defense an even larger part of the overall discretionary budget.

According to the White House plan, which Obama unveiled on Wednesday, while defense would be cut by $400 billion over the next decade, non-defense discretionary spending would be cut by $770 billion. That means stuff like labor law enforcement, low-income energy assistance and food aid to the poor would be cut almost twice as much as the bloated defense budget.

What's particularly galling about these numbers is that they're part of a budget in which defense already makes up 58 percent of discretionary spending. In other words, out of the $1.2 trillion of proposed cuts to the overall discretionary budget, nearly two-thirds will be imposed upon the non-defense priorities that comprise just 42 percent of the existing discretionary budget.

That means despite all the headlines about proposed defense cuts, Obama is proposing to tilt the overall share of discretionary spending even further toward the Pentagon -- a move that polls show is the opposite of what Americans want ... or is it?

This deification of the military hasn't always been the case. Following the loss in Vietnam and a botched hostage rescue mission in Iran, a 1981 Gallup survey showed just 50 percent of the country said it had confidence in the military -- an all-time low. After a decade of 1980s hyper-militarist agitprop, though, that same survey found 85 percent of Americans expressing "a great deal" or "quite a lot" of confidence in the same institution. That's more than one out of every three Americans radically changing their views -- a previously unheard of statistical swing in mass opinion.

Considering the herky-jerky shift, you might expect Americans' confidence in the military to be in decline today. Though we're not suffering from a full-on Vietnam hangover, we've seen a lot that at another time would have at least mildly shaken America's confidence in the Pentagon -- endless wars in Afghanistan and Iraq, a new war in Libya, the Abu Ghraib scandal, constant reminders of Pentagon waste and ongoing corporate war profiteering, to name a few examples.

But this is 2011. We're three decades into a coordinated project that now injects triumphalist militarism into absolutely everything -- our movies, our video games, our television, our toys, our shopping malls and, of course, our politics. It is a Military-Entertainment Complex, and it's been wildly successful.

Despite all the obviously negative -- and wildly unpopular! -- consequences of unbridled militarism, a new Gallup poll shows that the military remains the most trusted institution in the country. Even more stunning, Americans not only express unquestioned confidence in the Pentagon, but many believe its power shouldn't be reined in at all -- and lots of folks insist it should be given even more unchecked power than it already has.

Considering these two competing views of the military -- in other words, cut its budget but give it more power -- perhaps the true thrust of Obama's budget proposal is a tacit effort to somehow square the circle. He knows Americans want overall Pentagon budget cuts, but he's also increasing the size (and power) of the military relative to the rest of government.