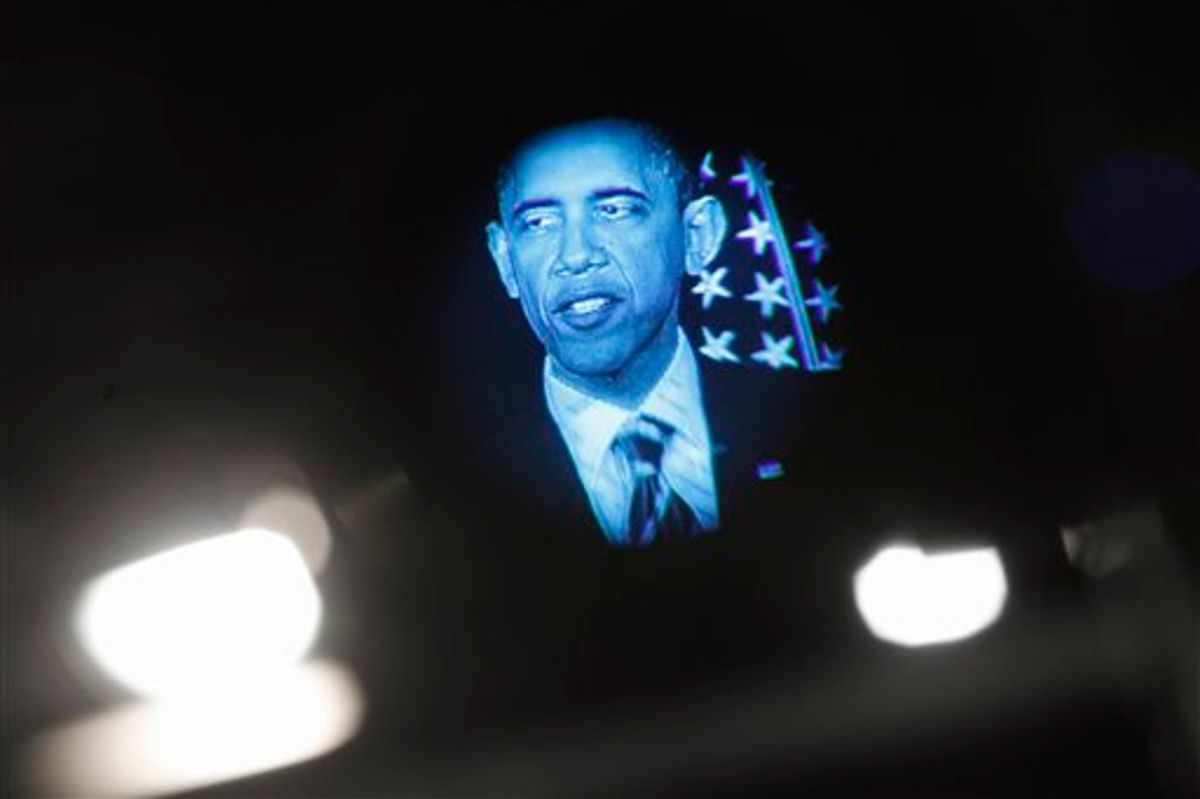 President Barack Obama is seen in a television monitor as he outlines his fiscal policy during an address at George Washington University in Washington, Wednesday, April 13, 2011. (AP Photo/Charles Dharapak) (AP)
--

By any rational standard, President Obama ought to have the Republicans exactly where he wants them in the upcoming budget fight. The public, as opposed to professional pundits, largely sided with the White House during last week's made-for-TV government shutdown melodrama.

Overall, according to a CNN poll, 58 percent of Americans favored the FY2011 budget compromise while 38 percent disapproved. Two-thirds of Democrats and 56 percent of independents favored the deal, while a plurality of Republicans think their party leaders gave away too much. That would be the high-chair faction of the Tea Party, an impassioned minority holding their breath until they turn blue.

Did Obama look weak by urging compromise? No, he looked reasonable. I'm with Kevin Drum on this. Substantively, the president surely understands that sharp cuts in government spending during a recession hurt job growth. However, the economy's moving again, the public's spooked about budget deficits, and there's a far more significant battle coming.

For Obama, bringing Democrats and Republicans to the White House to reason together was the tactical equivalent of an intentional walk in baseball. Drum: "He's agreed to cuts but also shown that he'll fight against crazy cuts, and he thinks that will help him take the high ground when he unveils his own long-term deficit program."

Continuing the baseball metaphor, the hitter Obama wants to pitch to would-be Rep. Paul Ryan, the Wisconsin Republican with the funeral director's demeanor and the zeal of an Ayn Rand enthusiast. Reduced to a slogan, Ryan's ballyhooed plan is "Back to the 19th century": $4.5 trillion in tax cuts for millionaires and corporations, huge cuts in Social Security, Medicaid and food stamps, while privatizing Medicare.

To the degree that it endorses Ryan's schemes, in a sane political climate the GOP would be risking political obsolescence. This was the same party that only a year ago pitched a fit over Sarah Palin's imaginary "death panels." Now its leading thinker wants to control costs by asking grandma to bargain for cheaper heart surgery?

Standards, however, are anything but rational. The president faces a defining challenge. I often wonder whether Obama has mistaken the U.S. government for the Harvard Law Review, where the emollient balm of his personality persuaded rival factions to reason together.

Ivy League intellectual that he is, I'm afraid he definitely underestimates public ignorance on everything relating to the budget: where the money comes from, where it goes, and what's at stake in the coming showdown over the U.S. government debt limit. It's hard for somebody as obsessed with public policy as Obama to grasp how little his countrymen know.

Former Reagan Treasury Department official Bruce Bartlett sums it up: "(T)he vast majority of Americans have no idea of the true composition of federal spending. According to a recent Rasmussen survey, just 35 percent of Americans know that Social Security, Medicare and national defense spending constitute more than 50 percent of the federal budget. ... A 2001 poll showed that half of all Americans thought foreign aid comprised at least 20 percent of the budget, and the average (guess) was 25 percent. In fact, foreign aid is less than 1 percent of the budget and has been for decades."

It follows that foreign aid is basically the only part of the budget that majorities favor trimming. Cutting programs seen as vital to the middle class has little support. A recent CNN poll revealed that although 7 in 10 voters claim they want a smaller government, 81 percent oppose cutting Medicare, 78 percent Social Security, and 70 percent Medicaid. Fewer than one-third support cuts in defense spending.

During the recent government shutdown fight, another CNN poll revealed that voters' median estimate of public broadcasting's (NPR and PBS) cost to the U.S. Treasury was 5 percent. The real number is one-hundredth of 1 percent. No wonder GOP flimflams fool so many people. They simply haven't got a clue.

But the most alarming number of all was the NBC/Wall Street Journal poll last week that showed just 16 percent of the public supports raising the government debt ceiling, while 46 percent oppose and 38 percent admit they don't know apple butter from shinola about it.

For White House aides to throw around words like "Armageddon" and "catastrophic" won't suffice. People are accustomed to hearing mundane events like football games so described. The president must educate the people about the certain chaos that would follow.

Indeed it's probably unconstitutional for Congress to tamper with "the full faith and credit" of U.S. government securities. Deemed unthinkable since 1789, it's never really been tested. The 14th Amendment specifically states that "The validity of the public debt, authorized by law ... shall not be questioned."

Congress can repeal Medicare and Social Security, but it can't renounce their lawful debts. Ordinarily, an establishment Republican like John Boehner would refrain from even bluffing about the idea, which he dare not follow through.

Obama's seeming passivity, however, has made the GOP reckless.