Donald Trump brags about his great relationship with "the blacks" 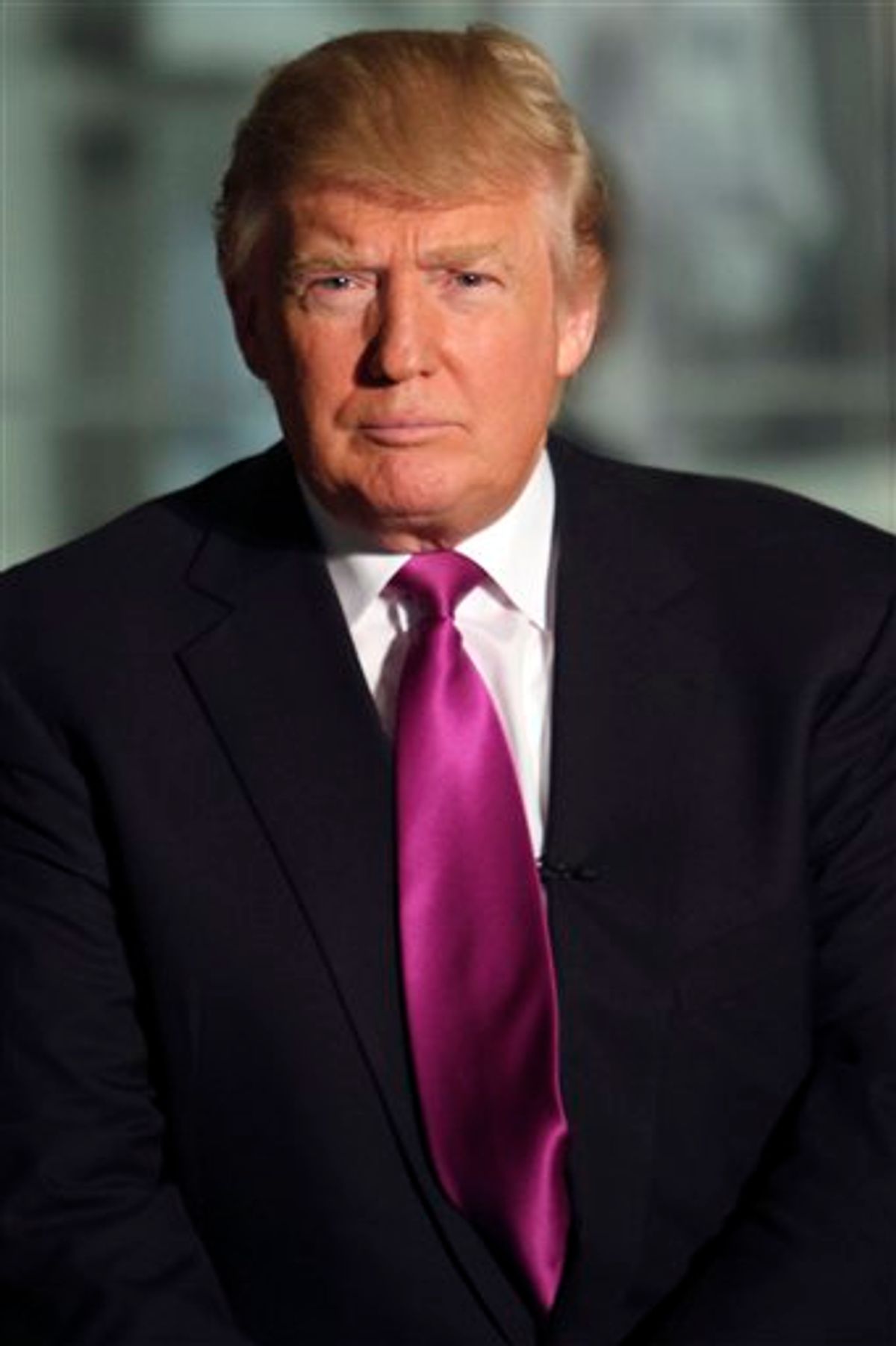 Donald Trump may have just committed the first major gaffe of his latest fake presidential campaign. (Well, unless you count his birther crusade as one giant, weeks-long gaffe, which it probably isn't, since it's helped vault him to the top of some early Republican presidential polls.)

Appearing on a radio show hosted by the New York Post's Fred Dicker this morning, Trump took on the "frightening" level of support that President Obama enjoys from black voters, bragged that "I've always had a great relationship with the blacks," and saluted Hillary Clinton -- whose 2008 campaign against Obama was dogged by occasional suggestions that it was catering to racial and cultural resentments -- for all the work she's done for "the black population."

We can argue about whether this might hurt Trump -- both in terms of his fake presidential campaign's prospects and the reputation of the Trump brand. Right now, it's unclear how much -- if any -- pickup it will even receive.

But his racially awkward comments do stir memories of another unfortunate incident involving a rich guy turned presidential candidate.

Back in July 1992, Ross Perot agreed to speak at the NAACP's annual convention in Nashville. It was an important moment for the Texas billionaire, who had set off a grass-roots explosion months earlier by promising to wage an independent presidential candidacy if volunteers put him on the ballot in all 50 states. The public -- fed up with President George H.W. Bush and a sputtering economy, but turned off by the scandal-plagued Bill Clinton -- had responded. Ballot drives were initiated and completed in record time and by June, polls showed Perot climbing into first place in a three-way race. But as the press ratcheted up its scrutiny, doubts about Perot began to emerge and his poll numbers slid back. By early July, when he accepted the NAACP invitation, he had fallen back under 30 percent in national polls, with Clinton rising from the dead and surpassing him for second place.

It was against this backdrop that Perot arrived in Nashville for an unofficial showdown with Clinton -- who, the day before, had tapped Al Gore as his running mate. The speech was an opportunity for Perot to regain his footing, to demonstrate that his message had broad appeal, and to reclaim some of the ground he'd been losing to Clinton. A month earlier, Clinton had angered some black leaders -- and Jesse Jackson, in particular -- by using a speech to Jackson's Rainbow Coalition to rebuke rapper Sister Souljah for the inflammatory comments she made in the wake of the L.A. riots. In other words, it seemed entirely possible that Perot would outshine Clinton at the NAACP convention.

Except that's not at all what happened. Here's how the Atlanta Journal-Constitution summed up what happened when Perot took the stage:

Rattling off a list of gloomy statistics on unemployment from around the country, Mr. Perot offended many in the audience - and incited a heckler - within the first five minutes of his 30-minute speech, in which he never used the term "civil rights."

"I don't have to tell you who gets hurt the worst when this sort of thing happens to them: You, you people do, your people do. I know that, you know that," Mr. Perot said.

"Your people?" shouted Hosac Sharpe, 21, from the back of the room.

"I didn't understand you," Mr. Perot responded to the Chicago State University student, who repeated the phrase for him.

"Thank you," the Texas tycoon replied. But Mr. Sharpe was not satisfied.

"Correct it!" he shouted.

But minutes later, while talking about crime, Mr. Perot used the phrase again, and the scene with Mr. Sharpe was repeated.

"A billionaire like himself should have someone help him in his speech," one delegate said later. "A person of his stature in America shouldn't be saying 'your people' at a NAACP convention. That's insulting. That's insulting to everybody, and no one can say it's not." Perot, for his part, seemed confused why anyone might be upset: "It never occurred to me that they would be offended, and if I offended anybody in any way I certainly apologize. In all the years I have worked with the black community, I have never run into a sensitivity problem."

Clinton, as you might imagine, wowed the crowd. There were no repeats of his Sister Souljah moment; he'd made his point -- and accomplished his goal -- the previous month. Jackson quickly announced that he was backing Clinton -- while Perot endured his latest round of bad press. A week later, hours before Clinton was to deliver his acceptance speech at the Democratic convention, Perot dropped out.