The biggest, dumbest wingnut site on the Web

And boy, WorldNetDaily sure is upset at us 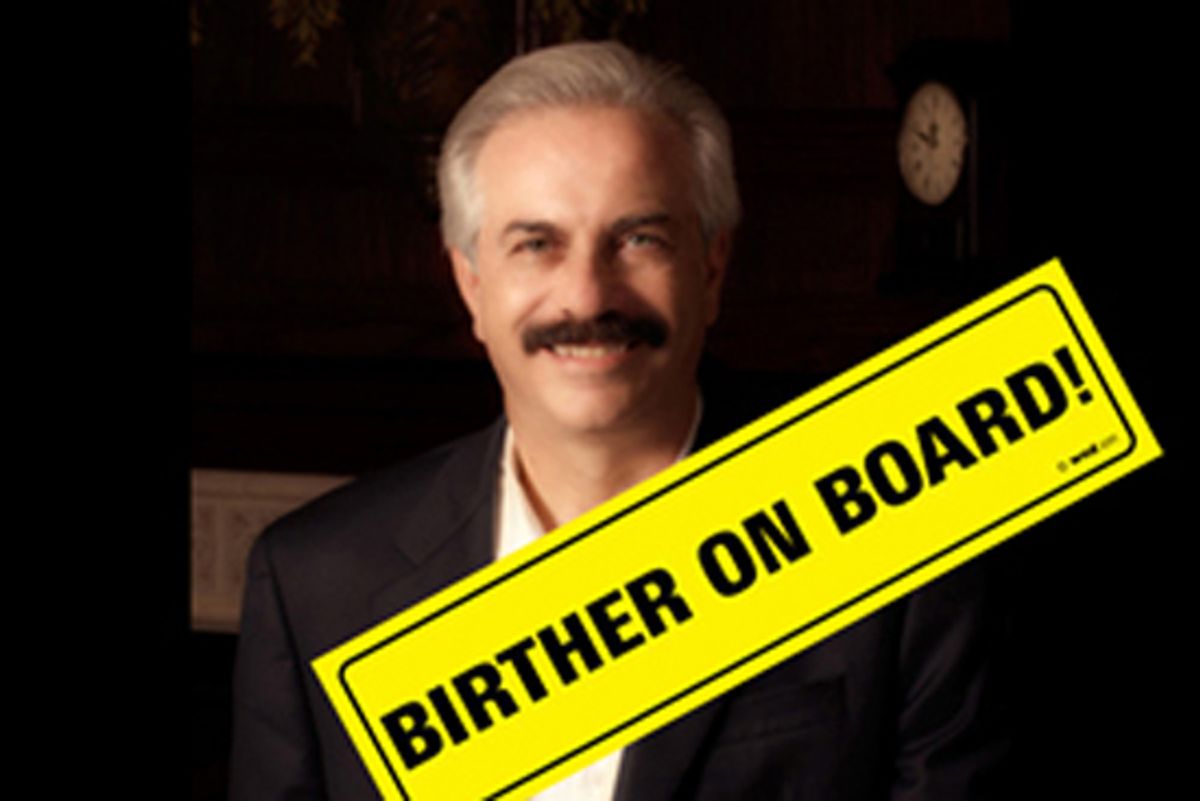 When my colleague Justin Elliott explained how WorldNetDaily invented the "Obama spent $2 million fighting birther lawsuits" claim (short version: $2 million is what the Obama campaign paid a law firm in total, and in WND's imagination the only thing a presidential campaign needs a law firm for is hiding birth certificates), WND's founder got mad and called him names. (All of this was right after they published Jack Cashill's embarrassing Photoshop follies.)

WND was, I guess, not happy with my colleague's coverage of its unhappiness, because today it attempted to smear him in two separate but equally amusing articles. The first, by Farah himself, is just a lot of words calling Elliott a punk while never once actually acknowledging that WND's "$2 million" figure is false. No, WND is right because its "investigation" into the matter is a three-part series, and no one can possibly be wrong at such great length.

The best part of Farah's commentary is when he argues that Elliott is wrong and WND's reporter is right because of their respective bios. While Elliott has merely written for various places, WND's reporter was in the Army and is "one of the most remarkable young women I have ever met." Take that, Justin: Joseph Farah doesn't think you're remarkable!

The real meat of WND's response, though, is in this post that "reveals" Justin Elliott's ties to ...  George Soros. See, Elliott contributed to CampusProgress.org, which is published by the Center for American Progress, a liberal think tank founded with money from George Soros. So ... Soros! Ooga booga!

This investigation was written by Aaron Klein, who is WND's Jerusalem Bureau Chief. Oh, and: "With research by Brenda J. Elliott." It took two people, one of them a foreign correspondent, to Google Justin. Just like how it took two people to edit Barack Obama's Wikipedia page to include birther conspiracy theories and then write a story accusing Wikipedia of bias after people removed those edits, which is something Mr. Klein and a "researcher" did in 2009.

(Besides his Wikipedia misadventures, Klein is most famous for constantly repeating the stunt of interviewing members of Hamas and reporting that they "support" or "endorse" various American liberals, which proves conclusively every single time that Democrats are terrorists, by the law of transitive Islamofascism.)

So, let's talk about WorldNetDaily for a minute.

WorldNetDaily is a magnet for the dumbest, dullest wingnuts in America. Even its lawyer is a buffoon. Last year, WND sued the White House Correspondents' Association because WND's disreputable conspiracy website was only given one table at the Correspondents Dinner. (They do have a White House correspondent, actually. It's Les Kinsolving, a tragicomedy of a man who is invited to briefings solely to be called on when the press secretary wants to answer a stupid question about who wrote the president's memoir instead of a serious question about reality.) Anyway, their lawyer was Larry Klayman, who is not allowed to appear before courts in much of the United States because of his "total disregard for the judicial process."

Here is a story from WorldNetDaily: "Soy is making kids 'gay.'" It is in six parts. The original headline was "A devil food is turning our kids into homosexuals." WorldNetDaily demands your respect! It is a serious news organization!

In 2008, WND "reported" on shocking emails exchanged between Obama and a Kenyan politician. You should really go look at them. "I will kindly wish that all our correspondence handled by Mr Mark Lippert," "Obama" "wrote." (Subject line: "Let's share a dream!" Bill Ayers must've written "Dreams From My Father," because Obama himself is apparently not fluent in English.) Ahem:

The e-mails, apparently sent by Obama himself, referenced the senator's aide, Mark Lippert. The e-mails were provided to WND by an insider in Kenya who fled Odinga's Orange Democratic political party and requested anonymity because of the danger of retaliation.

There is no end to the idiotic things printed at WorldNetDaily. Here's Obama's Kenyan birth certificate. Here's a piece on how al-Qaida is sneaking nukes into the U.S. through the unsecured Mexican border in tandem with street gangs. Here's white supremacist Vox Day asking why the media refuses to report that a mentally ill person claims to have had gay sex with Barack Obama.

WorldNetDaily knows its (large!) audience of halfwits will eat up any garbage it's served, and, better yet, the rubes will buy any trash that's for sale. (Tea-stained flags, anyone?)

Thanks to that substantial audience of the nation's stupidest and most fearful elderly people, WND is actually an influential member in good standing of the conservative movement; the RNC rents its massive email list. Because of that usefulness to the party, Farah and his buddies are allowed to persist in the delusion that they are sane and perhaps even respectable. But everyone knows they're frauds and crackpots. It takes five minutes of reading that bottomless repository of feverish bullshit to figure that out.