Outplayed by the president, Boehner can't get GOP votes for the budget. Next up: Paul Ryan's plan to kill Medicare 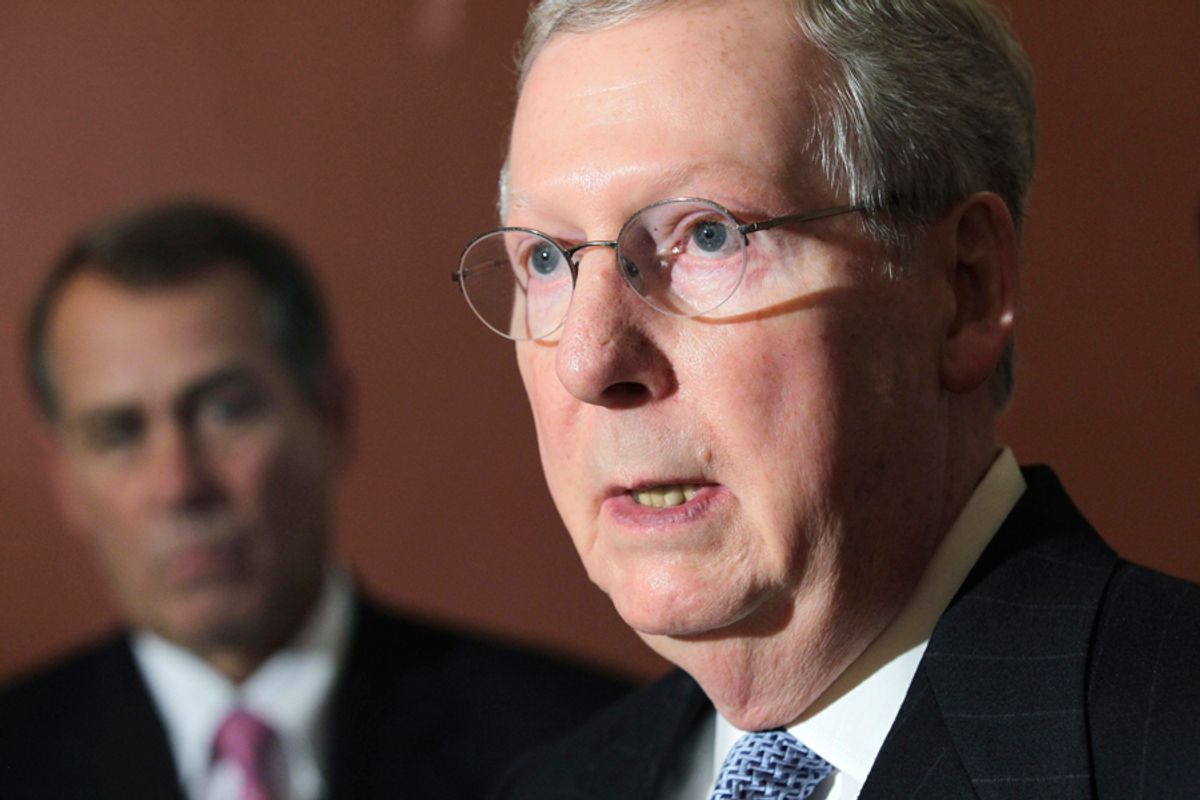 Senate Minority Leader Mitch McConnell of Ky., right, accompanied by House Speaker John Boehner Ohio, speaks to reporters on Capitol Hill in Washington, Wednesday, April 13, 2011, after meeting with President Barack Obama at the White House in advance of his speech on the deficit and his plan for future spending. (AP Photo/J. Scott Applewhite) (J. Scott Applewhite)
--

I'm liking President Obama's budget speech even more the second day, especially listening to all the GOP whining about it.

On the Senate floor, minority leader Mitch McConnell scolded the president Thursday: "We will not solve our problems until he stops campaigning and joins us in a serious, bipartisan effort to change not only his tone but his direction." Wow, he sounds like a headmaster correcting an errant schoolboy about "not only his tone but his direction." He's actually the president, Senator, not a schoolboy, not even one of your errant caucus members. I think McConnell will have a lot more errant caucus members in the days to come.

Alex Pareene already documented the shock, the anger and the grief of Republicans who learned Wednesday that the president is a Democrat. It was even more fun to watch the party fall apart over Thursday's vote on the budget deal. I don't like the deal; the symbolism and reality of cutting the EPA, Women's, Infant and Children's programs and community health centers bothers me. But I'm a liberal Democrat. The GOP leadership made this bargain with the president – and then House speaker John Boehner couldn't even deliver his caucus behind the compromise, and he had to turn to Democrats for cover. In the end, 81 Democrats made up for defections by 58 Republicans. Boehner may wind up running a coalition speakership with Steny Hoyer, who voted for the compromise (House Minority Leader Nancy Pelosi, who speaks for me, voted no.)

Now I'm curious to see what happens with the vote on Paul Ryan's budget, set for the House on Friday. On Tuesday, Politico ran a story showing that Republicans in swing states like Pennsylvania, Florida and Ryan's own Wisconsin were non-committal on their vote for the plan, and that was before Obama politely handed Ryan his ass, along with a White House gift bag, in his Wednesday speech. It's become clear Ryan is out to gut Medicare, and after Republicans used Medicare to scare the hell out of senior citizens about "Obamacare," it's payback time. It wasn't just Sarah Palin ranting about "death panels," or Chuck Grassley accusing the president of wanting to "pull the plug on Grandma." Remember how Wyoming Sen. John Barrasso, consulted throughout the healthcare reform debate because he's a doctor, threatened Obama during his February 2010 bicameral meeting on the bill:

Most worried of all are the seniors, when you go to the senior centers, because they know there's going to be $500 billion taken away from those who depend upon Medicare for their health care. And it's not just Medicare Advantage. It's hospitals; it's the doctors; it's the nursing homes; it's home health, which is a lifeline for people that are home alone; hospice, for people in their final days of life.

Just wait til seniors get a load of the Ryan plan; it's tailor-made for 2012 campaign ads. Medicare exists because the private insurance market for seniors was horrible back in 1965; today, when it's horrible for everyone, imagine old and infirm people calling around for insurance quotes to use their vouchers. That would be a fun ad to film.

Obama made that case clear in his Wednesday speech, and now Republicans get to answer him by voting on Ryan's plan. They need 217 votes to pass it, so only 22 get to say no. It could get interesting. They could need Democrats' votes, and if any Democrat is dumb and venal enough to vote for the Ryan plan, he or she should be immediately primaried (and have his or her government health insurance terminated.)

The president has Republicans on the defensive for the first time since Inauguration Day, and I'm enjoying it.

Talked about all of this with MSNBC's Cenk Uygur today, along with former GOP Rep. Ernie Istook: