The grief the GOP just brought on itself 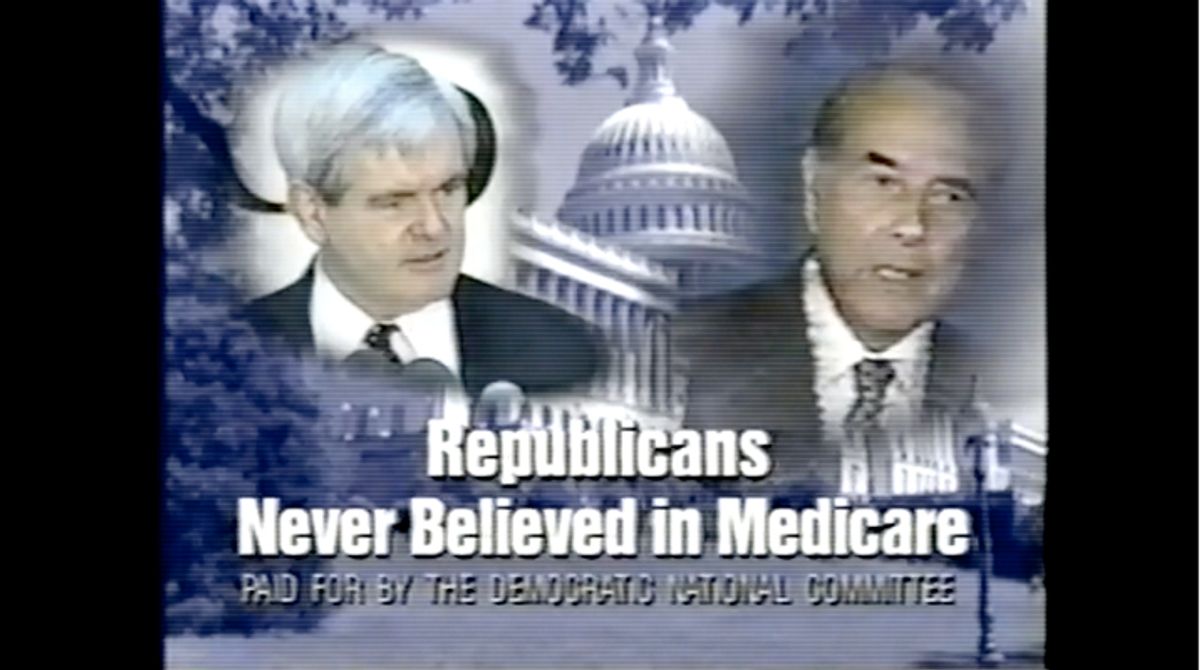 With only four defections -- and against unanimous opposition from Democrats -- Republicans just pushed through the House a budget plan that would fundamentally alter Medicare, turning it into a voucher program for Americans now under the age of 55. The final vote was 235-193.

Democrats are already promising to use this vote as the basis for their effort to win back the House in 2012. Medicare is an extremely popular program, even among Republican voters, and the GOP -- which fought its creation in 1965 and which has made occasional efforts to weaken it in the years since then -- has long been particularly vulnerable on the issue. In effect, Republicans just wandered into the exact same trap that snared them in 1995 and 1996, when they made their last assault on Medicare -- and paid for it dearly.

Why would Republicans do this? Probably for the same reason they did it 15 years ago, when they badly misread the midterm election landslide that had propelled them to power on Capitol Hill.

Back then, Newt Gingrich and his GOP revolutionaries were convinced that the public wanted to see a balanced budget at any cost (well, any cost that didn't involve tax hikes). Never mind that George H.W. Bush and Bill Clinton -- through upper-income tax increases -- had actually set the country on course to tame its runaway deficits; back in '95, the results of the Bush and Clinton programs weren't yet obvious. So Gingrich and his fellow Republicans concocted a draconian budget plan that, among other things, included drastic Medicare reductions. Democrats rallied in opposition, Bill Clinton drew his famous line in the sand, and a government shutdown (actually, two of them) ensued. From a P.R. standpoint, Clinton and the Democrats were the clear winners. The country turned hard against Gingrich and the GOP, and their attempt to cut Medicare became one of the defining issues in the '96 campaign. Not only did Clinton use it to batter his GOP opponent, Bob Dole (who had been the Senate's GOP leader during the shutdowns), but dozens of individual House GOP members were subjected to attack ads that highlighted their support for the Gingrich-led raid on Medicare.

Here's one of the ads that Clinton ran against Dole in the fall of 1996. Almost identical spots were run against Republican House incumbents across the country:

Clinton was never seriously threatened by Dole and went on to win by 8 points. Republicans lost a total of nine seats in the House (though more GOP incumbents than that were defeated), although they did manage to retain control of the chamber. Gingrich's popularity plunged to levels rarely seen in national politics.

What's fascinating about today's House vote, as Jonathan Bernstein pointed out earlier today, is that -- for all of the potential political risk -- it was essentially symbolic. Democrats control the Senate and the White House, so this plan has no chance of ever being enacted. And yet only four Republicans voted against it. Many of these Republicans, to be sure, won't pay a price; their districts are painted a dark shade of red and they have to worry far more about primary challenges than general elections. These Republicans, who are at the mercy of the party's most die-hard ideologues, probably made smart votes by supporting this budget. But others -- particularly the 14 House Republicans who represent districts that both Barack Obama and John Kerry won -- could face real general election blowback for this vote. Beyond that, there's also the potential for this vote to damage the Republican Party's brand, and to shape the debate in 2012 just as the '95 Medicare defined the '96 campaign.

In other words, this was a vote that Republicans insisted on -- but that will only help Democrats.