TEPCO will provide each evacuated family with $12,000, an amount seen by some as too small 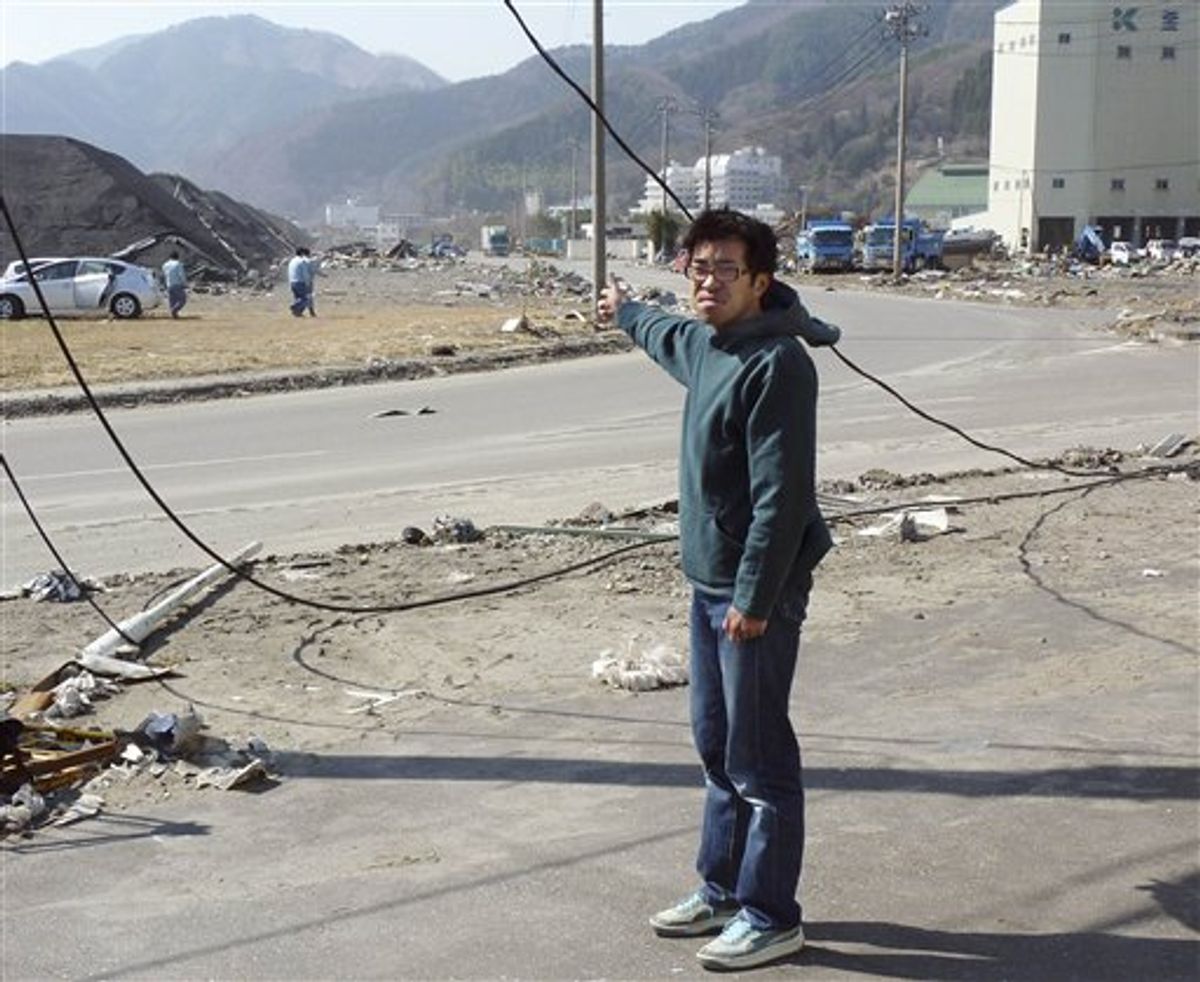 Toya Chiba, a reporter with the Iwate Tokai newspaper, recounts his ordeal with the tsunami that swept him away at the port city of Kamaishi, northeastern Japan, on Wednesday April 13, 2011. The region was struck by a massive earthquake that spawned the tsunami on March 11, 2011. Chiba, who was shooting photos at the mouth of the Owatari River when the tsunami struck him, survived and found himself only suffering scratches and bruises after being swept away for about 30 meters (98 feet). (AP Photo/Kyodo News) JAPAN OUT, MANDATORY CREDIT, NO LICENSING IN CHINA, HONG KONG, JAPAN, SOUTH KOREA AND FRANCE (AP)
--

The operator of Japan's tsunami-damaged nuclear plant said Friday it would pay an initial $12,000 for each household forced to evacuate because of leaking radiation -- a handout some of the displaced slammed as too little.

Tens of thousands of residents unable to return to their homes near the nuclear plant are bereft of their livelihoods and possessions, unsure of when, if ever, they will be able to return home. Some have traveled hundreds of kilometers (miles) to Tokyo Electric Power Co.'s headquarters in Tokyo to press their demands for compensation.

"We have decided to pay provisional compensation to provide the slightest help for the people (who were affected)," TEPCO President Masataka Shimizu told a news conference.

Roughly 48,000 households living within about 19 miles (30 kilometers) of the crippled Fukushima Dai-ichi nuclear plant would be eligible for the payments, said Trade Ministry spokesman Hiroaki Wada. More compensation was expected later, he said.

"I'm not satisfied," said Kazuko Suzuki, a 49-year-old single mother of two teenagers from the town of Futuba, adjacent to the plant. She has lived at a shelter at a high school north of Tokyo for the last month.

Her family has had to buy clothes, food, shampoo and other basics because they fled the area on government orders without taking time to pack. She has lost her job as a welfare worker, and a job prospect for her 18-year-old fell through because of the effects of the disaster.

"We've had to spend money on so many extra things and we don't know how long this could go on," she said.

Akemi Osumi, a 48-year-old mother of three also from Futuba, said the money was a "small step" but that it didn't fairly compensate larger families. Her family is living at the same shelter but also must rent an apartment for her eldest son to go to a vocational school.

"One million yen doesn't go very far," she said. "I'm not convinced at just 1 million yen per family. If it was dependent on the size of the family I'd understand, but it's not."

TEPCO expects to pay 50 billion yen (about $600 million) in this initial round. But Shimizu said 2 trillion yen ($24 billion) was needed to resolve the continuing problems with the plant and to restart conventional power stations to make up for power shortages.

Shimizu said the utility would consider cutting the salaries for executives as well as a number of its employees.

The company is still struggling to stabilize the nuclear plant, which saw its cooling systems fail after a magnitude 9.0 earthquake on March 11 triggered a massive tsunami that wrecked emergency backup systems as well as much of the plant's regular equipment.

Radiation leaks from the crisis have contaminated crops and left fishermen in the region unable to sell their catches, a huge blow to an area heavily dependent on fishing and farming.

The governor of Fukushima, Yuhei Sato, has vigorously criticized both TEPCO and the government for their handling of the disaster, demanding faster action.

"This is just a beginning. The accident has not ended. We will continue to ask the government and TEPCO to fully compensate evacuees."

Nearly 140,000 people are still living in shelters after losing their homes or being advised to evacuate because of concerns about radiation.

Japanese law calls for the government to pay up to 240 billion yen ($2.9 billion ) in compensation for nuclear accidents, and apart from TEPCO's provisional payment to evacuees, billions more are likely to be paid to fisherman, farmers and others who have suffered losses.

The law exempts the operator when the accidents are "caused by a grave natural disaster of an exceptional character, or by an insurrection." However, it would be politically untenable for TEPCO to cite the tsunami as a rationale for not paying damages, given the complex nature of the problems that have unfolded at the plant, and questions over its preparedness, among other issues.

It is unclear whether TEPCO is likely to face lawsuits going forward. Most Japanese prefer to avoid the cost and publicity of going to the courts for redress, and the country relies heavily on nonjudicial resolution of disputes.

With the northeastern coast still a wreck, at least one poll shows public support for increasing taxes to pay for disaster recovery.

According to a random telephone poll of 1,036 people by the Yomiuri Shimbun over April 1-3, some 60 percent of respondents said they would support higher taxes for recovery efforts. The paper didn't give a margin of error, but a poll of that size would have a margin of error of 5 percentage points.

Chief Cabinet Secretary Yukio Edano was noncommittal about such a tax when asked, but didn't rule it out.

"The government needs to consider various measures" for funding the rebuilding, he said. "It would be up the Cabinet and parliament to make a responsible, final decision," he said.