With uncertain futures for "30 Rock" and "The Office," and a spate of bad sitcoms, the network should be worried 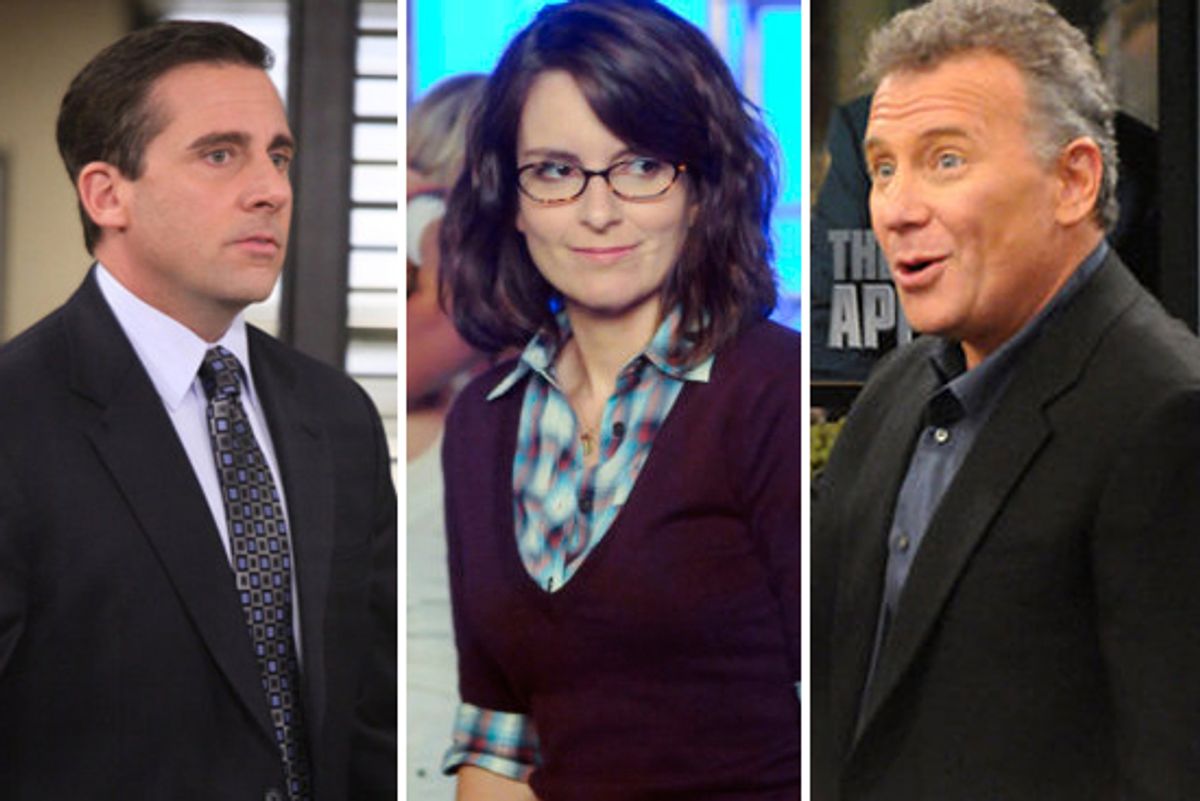 Can NBC ever turn all of Thursday into Must-See TV?
--

NBC's Thursday night lineup has four comedies that complement each other without seeming like clones -- single-camera, formally playful sitcoms with a whiff of improvisation. I keep hoping the network will fill out its two problematic slots with shows as good as the other four. But between behind-the-scenes casting drama on veteran series ("The Office" losing Steve Carell, rumblings of a "30 Rock" shutdown) and some newer Thursday night shows that seem (or seemed, past tense) like filler, the night will never deliver on its immense promise. Viewers might have to be content with appreciating what's there, not expecting much more, and hoping that the people who run each series know what they're doing -- because NBC clearly doesn't. Vision-wise, the network is shaky.

"Community" is the series I keep wanting "Glee" to be -- a laboratory where writers, performers and directors try out whatever storytelling experiment strikes their fancy. Even when it annoys or disappoints me, which is often, I respect its originality, and its determination to surprise and confound the viewer. "The Office" (9 p.m./8 Central) is already an institution, but it doesn't carry itself that way; it has softened over time -- a phenomenon I wrote about here -- but its relaxed craziness is still irresistible, and each season has an implied shape and an internal logic, especially this year, which has inevitably built toward star Steve Carell's departure (his tenure ends April 28 with a 50-minute farewell episode). "30 Rock" (9 p.m./8 Central) is likewise edging up on "institution" status, but like "The Office," it's still fleet-footed, although last night's episode -- cross-cutting between Liz and Kenneth tracking the AWOL Tracy and Jenna starring in a torture porn movie -- felt thin and riff-y even by Tina Fey's standards. "Parks and Recreation" (9:30 p.m./8:30 Central) is truly something special. It's as ostentatiously odd as any of its Thursday night schedule-mates, but warmer and sweeter. And in just two (really one-and-a-half) seasons, it has built a fictional world as detailed as any on TV. (If it stays on the air another couple of years, I wouldn't be surprised if it inspired a special edition of Monopoly, where players can purchase the pit, the Pawnee Zoo, the Bulge and other landmarks.)

The debut of "The Paul Reiser Show" can only wreak havoc. The sitcom, which sat on the shelf for what seemed like a thousand years, stars Paul Reiser as a fictionalized version of Paul Reiser. The actor is likable, sort of, but his predicament isn't exactly the stuff of high-stakes, laugh-out-loud comedy. The hero's biggest problem is that he's achieved most of his lifelong dreams and now doesn't know what to do with himself. He's got millions in the bank (courtesy of NBC's "Mad About You"), a beautiful house, a beautiful wife, a couple of cute kids, and a lifestyle that consists mainly of attending his kids' school activities and killing time with his fellow parents. "What would you say I do for a living?" he asks his lawyer friend, Jonathan (Ben Shenkman). "Not much," his friend replies. He's a Los Angeles layabout, like Larry David on "Curb Your Enthusiasm" -- except not a bizarre, hateful bastard. Where's the fun in that?

David guest-starred in last night's pilot, in what seemed like a preemptive strike against smartass critics like yours truly. Both David and Reiser were being courted to host the same game show. But the "Seinfeld" co-creator's abrasive, unsettling presence only emphasized the Reiser sitcom's vanilla pudding harmlessness -- and the seemingly ironclad network mandate, which holds that sitcom heroes can't be too edgy, otherwise audiences bail. "Why do you give a shit whether I host a game show?" David hollered at him; the word was bleeped and there was a blurry circle hiding his lips. "You should be doing your own version of 'Curb Your Enthusiasm,' because you're so much worse than I am!" David told him. Great idea, but it'd have to air on cable.

The fleeting hints of a smug pain-in-the-ass Reiser were way more interesting than the suburban-nice-guy-millionaire Reiser we were supposed to buy as "real." Reiser said the taping of the game show pilot was "the most degrading experience of my life," a declaration that made me want to reach into the screen and smack him. But the parts of the taping that we saw -- scene after scene of Reiser growing increasingly disgusted with the concept, the contestants and himself -- were more entertaining than sitcom surrounding it. They gave the star a space where he could be irritable and impatient and out of his element.

That's comic gold, or at least copper. And it meshes with the other NBC Thursday comedies, all of which are driven, to greater or lesser degrees, by loneliness, pettiness and desperation.Who wants to watch a bunch of nice-guy dads squabbling about their kids' school projects when we can watch a supposedly sweet superstar comedian reveal his inner jerk? Or for that matter, the borderline dada-esque nuttiness of "Community," which last night featured such Marx Brothers-worthy lines as "For homework, drink a glass of cognac in a bathtub," and "I felt like we got off on the wrong foot yesterday, and I wanted to offer you my other foot," and "The pain of not having enough pain is still pain, young man."

I wouldn't be getting hung up on the possibility of a perfect Thursday if I hadn't been perusing old network schedules recently, and taking note of the truly inspired evenings -- three-hour blocs that confirmed that programming is, in fact, an art as well as a science. Two examples that spring immediately to mind are NBC's 1984-85 Thursday night schedule ("The Cosby Show," "Family Ties," "Cheers," "Night Court" and "Hill Street Blues") and Fox's 2000-2001 Sunday night lineup ("Futurama," "King of the Hill," "The Simpsons," "Malcolm in the Middle," "The X-Files"). Granted, any given series on those nights had its own distinct merits and drawbacks ("Futurama" was charming and original but ultimately doomed, and "The Simpsons" and "The X-Files" were in decline circa 2000-2001). But if you looked at the breadth of the lineup, you could see a subtle tonal shift taking place, one that made viewers inclined to stay where they were instead of flipping around. Think about how, on NBC Thursdays circa 1985, the sunny domestic comedy of "The Cosby Show" gave way to the urban angst of "Hill Street Blues," with "Night Court" -- a raucously funny, often desperate sitcom, populated by the sorts of fringe characters that populated the holding cells on "Hill Street"-- serving as an aesthetic segue point, a gateway leading from light to darkness.

And right now? No segues. No rhyme or reason, really. "The Paul Reiser Show" feels as out-of-place on Thursday as its time slot predecessor, the arch, chatty, faintly therapeutic Britcom remake "Couples" (although its energy could not be more different). It's not a complete nonentity, like the evening's sign-off series "Outsourced." But its bored-rich-guy concept simply doesn't mesh with the likes of "Community," "The Office" and "Parks and Recreation," sitcoms about stressed-out American workers whose eccentric personalities chafe against the invisible constraints of "respectable" middle-class life. Nor does it complement the showbiz narcissism of "30 Rock" -- a show about well-to-do New York media types whose insecurity, craziness and workaholic tendencies stop them from getting complacent. Columnist David Kronke wondered if NBC's decision to place Reiser's flabby show in the middle of an otherwise energetic Thursday is some kind of grand experiment in programming theory. "That it airs just after 'Community' suggests that NBC programmers are masters of transgressive art," he told me yesterday. "They want their viewers' heads to explode from experiencing exponentially diverse theories of comedy back-to-back."

That's crazy, all right, but I like that theory better than the likely alternative: NBC doesn't have the slightest idea how to turn a good night into a great one, and right now it's just spinning its wheels, praying that Alec Baldwin and Tiny Fey stick with "30 Rock" and that whoever replaces Steve Carell doesn't level "The Office."