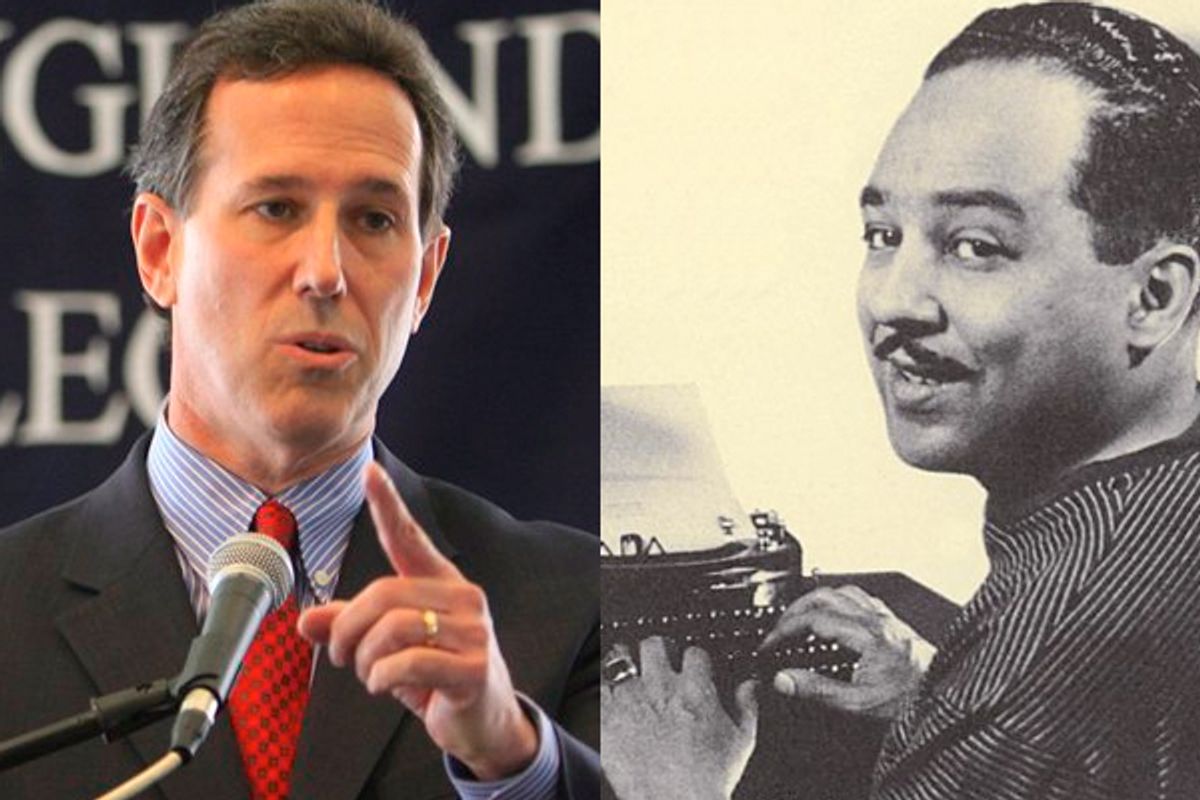 Rick Santorum and his uncredited (and unwanted) campaign contributor
--

Long-ago Sen. Rick Santorum is running for president, despite his "Google problem," and fresh out of the gate he has already invited more mockery. His campaign website features the slogan, "Fighting to Make America America Again" (by which I think he means that America is not America when there's a Muslim in charge).

As some liberals have noted, "Let America Be America Again" is the title of a poem by Langston Hughes, an avowed leftist who was probably gay. And the poem does not really reflect the Santorum agenda.

Because Santorum is not a very good politician, he allowed himself to be "tripped up" by a student who asked him about how his campaign slogan was written by a gay, black, pro-union leftist poet:

Santorum by and large stayed on message but was tripped up a bit when a student asked him if he knew that the choice of his slogan, "Fighting to make America America again," was borrowed from the "pro-union poem by the gay poet Langston Hughes."

"No I had nothing to do with that," Santorum said. "I didn't know that. And the folks who worked on that slogan for me didn't inform me that it came from that, if it in fact came from that."

The student, whose name was not immediately available, was referring to the poem "Let America Be America Again." When asked a short time later what the campaign slogan meant to him, Santorum said, "well, I'm not too sure that's my campaign slogan, I think it's on a web site."

It was also printed on the campaign literature handed out before the speech.

Oh, Rick. Immediately disowning your campaign slogan, and denying it's even your slogan, because some kid said it's similar to something a liberal poet wrote? It is going to be a long campaign. (But not for you, because you will not do very well and will drop out early.)

Obviously there is a difference between making America be America again and letting it, but Hughes' poem actually serves as a sort of prebuttal to Santorum's notion of restoring America to its mythical former glory. America was never America for plenty of Americans. ("There's never been equality for me, / Nor freedom in this 'homeland of the free.'")

Here is the poem being read by 95-year-old Lucy Davis:

Santorum hasn't selected a new slogan yet but I vote for "Rick Santorum: Moving America to Giovanni's Room."