When I almost died, and didn't find God

In an East African hospital, I battled a mysterious illness, but all anyone could ask was: Did I believe? 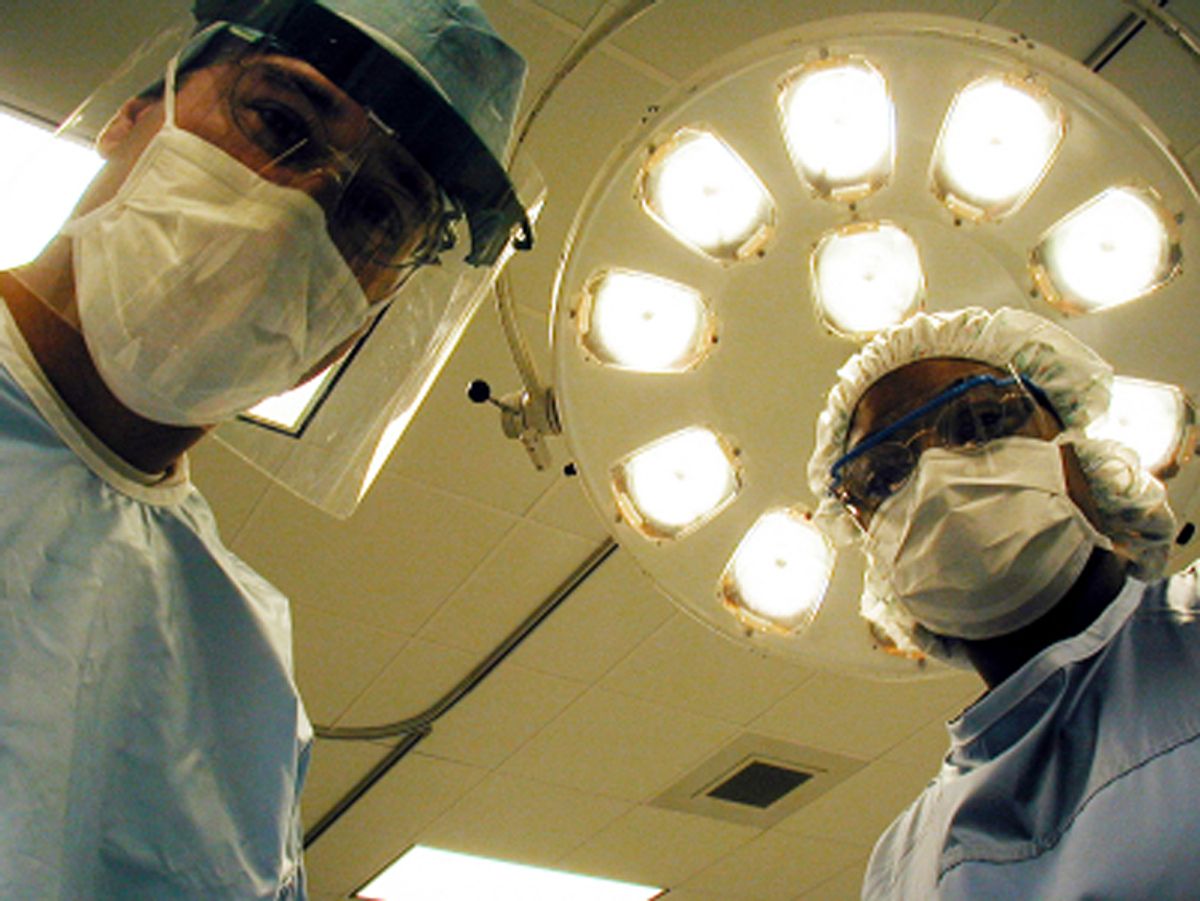 "Do you believe in God?" She was earnest. She wielded a clipboard.

A man walked up beside us. "Ça va?" He sounded young. A green mask covered half his face, but I remember him grinning.

From my back, on a bed, in a hallway, I replied automatically. "Comme ci, comme ça."

The doors opened. "It is time, Miss Tankard."

Lights, white tile, stainless steel. I remember the windows. The needle hurt, so they found another vein. An older voice told me to picture a happy place -- to imagine my family -- and they counted, backwards. The last thing I remember was the woman putting her face to my ear and whispering through her mask,"Believe, Miss Tankard, believe. He is real."

And then I was out.

I was living in a mud-street hut in Dar es Salaam with a family who really had become my family. We got water and electricity on odd or lucky days. From the city, I went on an archaeological dig on an island so remote that  twice a week a boat brought us drinking water, a crate of beer, box of cigarettes, chapati flour, and a few loud chickens. I awoke one morning to find a three-inch gash in my tent, all my valuables and medicine gone. Tanzania was an adjustment for a college girl from the States -- one I was excited to make, that I took as far as I could. I ate with my hands. I went barefoot. The trip was amazing.

Then, I found myself anesthetized in an East African hospital, talking about God.

I'd been feeling sick for weeks, but I was used to the sort of travel where you're supposed to feel like crap. I would have thought I was doing something wrong if it didn't hurt. Stomach cramps, dizziness, fatigue -- who didn't feel those when you woke at dawn and spent the day doing manual labor?

Still, I could barely get out of bed when I finally went to the clinic. They took a look, wrote a prescription for antibiotics, and sent me home. I can't remember what the initial  diagnosis was -- so many followed. It was a bladder infection, a kidney infection, something with my right liver -- no, the left one. For one chilling moment, I had a tumor. And then it was gone again.

A few days later I was hospitalized.

It wasn't my first time in a "third world" hospital and I wasn't concerned. The tile looked clean. There were sheets on the beds. The windows opened and closed. They put me in a room with two other beds; there was an old woman in the far bed whose family -- daughters and their children -- camped against the far wall.

"Ask the mamas if you need anything," the nurses told me. "They will help you."

Eventually, I needed them. The hospital was out of stronger painkillers. The plumbing to our bathroom broke. The hospital was out of soap. Days went by without doctors. The catheter in my arm hurt; it started to bleed, and the bag was empty. An infant in the bed next to me had all four of its limbs in casts; the child screamed until falling asleep, then woke up just to scream again.

I got one of the mamas to help me out of bed -- apologizing for asking -- and hobbled down the hallway to the nurses' station. Two young girls were sitting there in pristine white uniforms. One of the girls was scotch-taping her fingers together. She stared at me blankly.

It turned out that getting admitted to the hospital was far easier than getting out would be. When my family doctor finally convinced my insurance I had to be transferred, the hospital wouldn't let me go.

An airlift was sent. The hospital said there were no ambulances -- so it left without me. The hospital said I hadn't paid. They were demanding cash -- they didn't trust the insurance company. Eventually, after failed and frustrated attempts, my insurance company told me I had to get on the next ambulance, no matter what. I unhooked the IV myself, got dressed, shoved my things into my backpack, and made it to the lobby. I gave them all the cash I had, but I was short by about $3. As I left, the receptionist ran out the door after me, trying to stop the ambulance. Later it will chill me to realize how close I came to dying. And that while people die every day for less, I had almost died for a measly three bucks.

When I got to Nairobi, I had never been so grateful to see Western infrastructure and British-colonial-inflected accents in my life. A few hours after admission, I was on a gurney outside the operating theater.

"Why, Miss Tankard, have you not stated your religion?" The young woman -- she might have been a nurse or a medical student, I wasn't sure -- asked.

It was a conversation I'd managed to avoid having in Tanzania, but now I was a bit trapped. I gave my normal, polite lie. "My family is Christian."

"Then I will correct this for you. Which denomination?"

I really should have known better than to tell them the truth. But somewhere between the painkillers and the shock of the whole ordeal, I decided to explain my agnostic upbringing, the lack of inspiration I found in my grandparents' faith, and my own rationalist materialism.

"Do you believe in God?"

I'm going to blame the painkillers for my side of the conversation. But she got the last word later that day, as I lay on that gurney, my consciousness slipping away. "Believe, Miss Tankard, he is real."

And so, I dreamed of judgment. In my dream, they slashed my abdomen open (in reality, three minuscule laparoscopic incisions). In my dream, they scraped my tattoo (a linear, floral, abstract design) off my hip and placed the two on scales. It was downright Egyptian; organs against a feather. In my dream, I was being drugged, by men who were after my body. I tried to fight the needle that, in my dream, they were trying to put in my arm -- I begged them, tried to explain that I didn't need anymore.

When I woke up they said the surgery went well.  The infection had been widespread and after all the antibiotics I'd been given, they couldn't identify the cause -- irritable bowel syndrome, pelvic inflammatory disease, or typhoid fever -- but I was going to be OK.

I spent a week recovering in the Nairobi hospital. It was almost pleasant, in the sort of way that a timeless period of no responsibility can be. Each morning I awoke to the same conversation. There was an elderly woman in the bed next to me named Violet. Her doctor entered the room and gave a soft good morning. She coughed gently and replied. She knew her name. But she didn't know what day it was. Or where she was. Or how long she'd been there. It was heartbreaking. Some afternoons, she got a bit more back. Others, she was panicked, demanding to go home.

Violet was a prominent and a loved member of her church, and the choir ladies came to visit every day. I ducked offers to have a minister or a priest visit me on Sunday, but I couldn't avoid those choir ladies. They peered around my curtain and asked if they could pray for me. I sighed. The truth is, there is no escaping religion in Nairobi.

They gathered around the bed, held their hands, raised their heads -- and sang.

I can't say that I came to God. I was briefly disappointed, watching the joy in their faces. It must be an incredible experience, to feel a divine presence. I guess it was telling that, even after all I'd been through, I didn't feel God.

But I got the next best thing: I felt their belief.