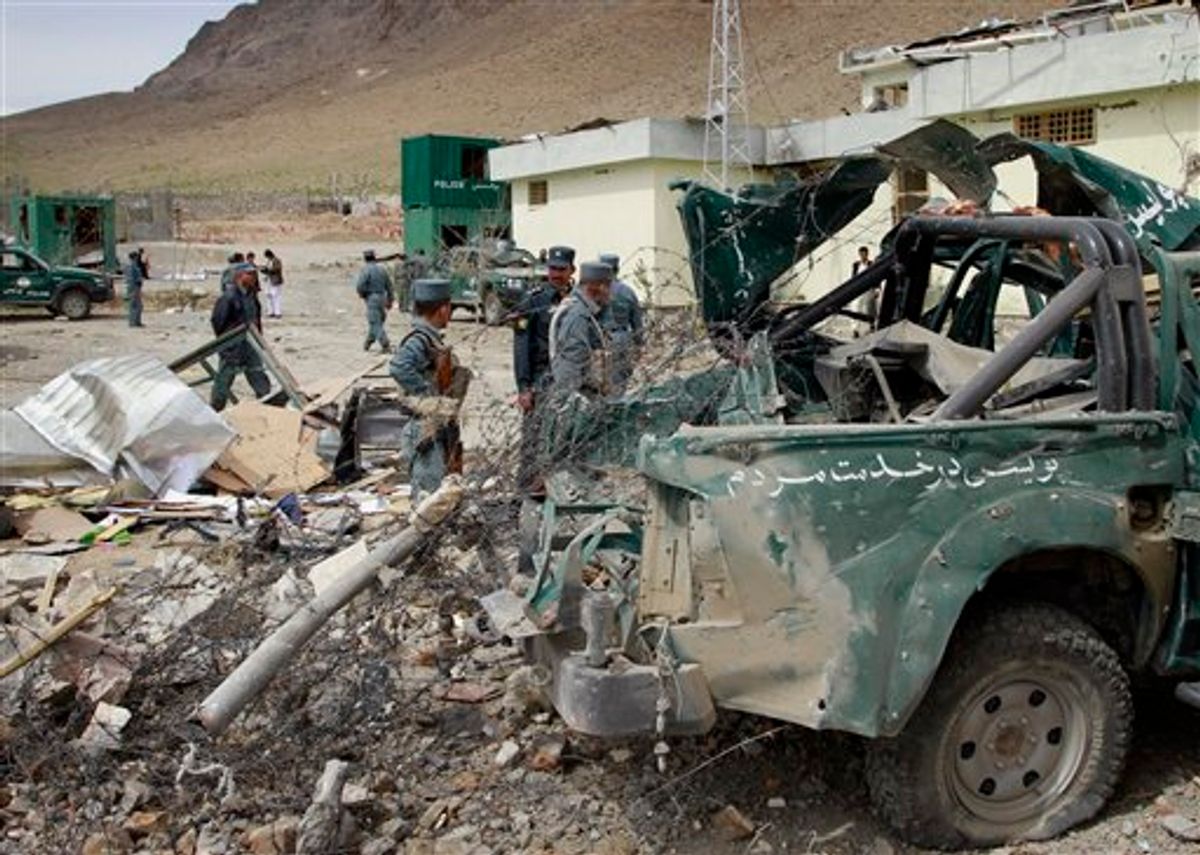 Afghan police men and officials stand close to a damaged police vehicle at the scene of a suicide car bomb explosion on the out skirts of Kabul, Afghanistan on Thursday, April 14, 2011. A suicide car bomber detonated a truck of explosives covered in wood at a government compound in Musayi district, about 40 miles south of the Afghan capital, according Daud Amin, deputy police chief in Kabul. Six members of the Afghan national security forces were injured, he said. (AP Photo/Musadeq Sadeq) (AP)
--

A suicide bomber wearing an Afghan army uniform blew himself up Saturday inside a military base in eastern Afghanistan, killing five NATO soldiers and four Afghan soldiers, officials said.

The Taliban claimed responsibility and said the bomber was a sleeper agent who joined the army a month ago.

"Today, when there was a meeting going on between Afghan and foreign soldiers, he used the opportunity to carry out the attack," Taliban spokesman Zabiullah Mujahid said in an email to reporters.

U.S. Master Sgt. Jason Haag, a NATO spokesman, confirmed the attack took place during a meeting on the Afghan army base, which also houses NATO trainers.

Attacks by insurgents who donned uniforms to infiltrate bases have appeared to increase over the past 12 months as NATO and Afghan forces work more closely together. The international coalition is ramping up the training of Afghan soldiers and policemen so they can take the lead in securing their nation by the end of 2014.

The Afghans added more than 70,000 police and soldiers last year and there are plans to increase the force to 305,000 troopers by the end of the year.

The bomber in Saturday's attack detonated his explosives at about 7:30 a.m., as many workers began their morning shift at the Forward Operating Base Gamberi in the Qarghayi district of Laghman province, said Afghan Defense Ministry spokesman Gen. Mohammad Zahir Azimi.

NATO and Afghan officials declined to comment on Mujahid's claim that the man had lived among Afghan soldiers for weeks.

NATO declined to release further information on the service members killed pending notification of their next of kin.

Afghan security forces are supposed to be vetted by past employers or even village elders, but in a country where unemployment is about 35 percent, the literacy rate is about 28 percent, and computerized record-keeping is a novelty, background checks are often rudimentary.

In the wake of such attacks, often it's not clear whether the shooter was an Afghan police officer who turned on his Western counterparts or an insurgent who donned a uniform to infiltrate the base and attack from inside.

On Friday, a man disguised as an Afghan policeman walked into a police headquarters complex in the southern province of Kandahar and killed the police chief, Khan Mohammad Mujahid.

In November, an Afghan border policeman shot to death six American soldiers in the eastern province of Nangarhar. The policeman had been in the force for three years and had accompanied American troopers for about three months when he opened fire on them.

The Taliban took responsibility for that attack.