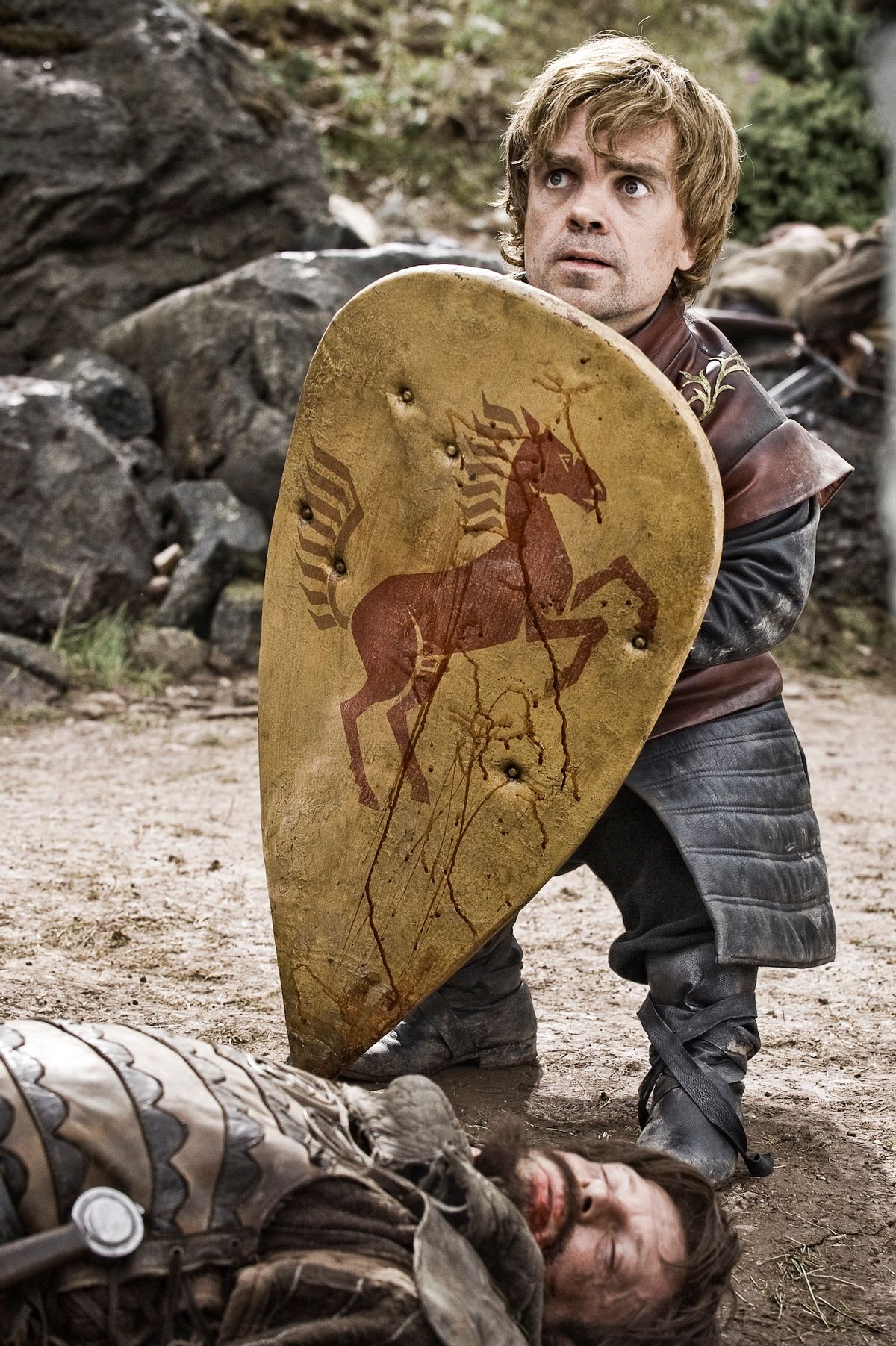 Peter Dinklage as Tyrion in HBO's "Game of Thrones."
--

I try to stay away from reviewing other people's reviews; "There but for the grace of God" and all that. But two recent pieces on HBO's "Game of Thrones" -- by Troy Patterson of Slate and Ginia Bellafante of The New York Times -- demand a response because they're deeply condescending.

Patterson's Slate review, titled "Quasi-Medieval, Dragon-Ridden Fantasy Crap: Art Thou Prepared to Watch 'Game of Thrones'?" is less a review than a creative writing exercise, penned in the style of....well, it's hard to say what, exactly. It's not a parody of George R.R. Martin's prose, which tends to avoid the turgid, translated-from-the-ancient-Hobbitesese diction that marks inferior sword-and-sorcery novels. It seems more like a goof on what Patterson imagines fantasy fiction to be.

There are unscalable slabs of expositionistic dialogue clogging the forward movement of the story. Sonorous and/or schmaltzy talk substitutes for the revelation of character through action. There is the sense of intricacy having been confused with intrigue and of a story transferred all too faithfully from its source and thus not transformed to meet the demands of the screen. For long stretches of each episode, the reviewer hangs on to consciousness only by trancing out on the strings of digits of the anti-counterfeiting watermark at the top of the screen, hanging on to the serifs by the nails.

The sex and violence also add interest, the former being unhealthily kinky, the latter abusively deft, both conducted with adolescent passion. No matter how dull the body of each installment of 'Game of Thrones,' it pulls itself together for a meticulously choreographed finish that builds its own discrete tension. The episode endings create anticipation like small marvels of cliff-hanging that erase the torpor of foregoing knightly knonsense from memory and get you hankering for the next look at the opening title sequence (which is a little masterpiece of welcoming design). Many of these cliffhangers depend on the infliction of imaginative horrors on women, precocious children, and four-legged animals, often with quite a light touch.

A casual persusal of Martin's writing reveals that it bears little relation to Patterson's spoof. But even if the sendup were accurate, the exercise would be misguided. This is a review of a TV series. Parodying Martin (if indeed that's what's going on here) would be as beside-the-point as parodying James M. Cain in a review of HBO's "Mildred Pierce."

I'm also puzzled by Patterson's complaint about "expositionistic dialogue clogging the forward movement of the story."As I wrote in my own review, "Game of Thrones" is off-puttingly dense, but economical; most of the scenes run less than two minutes. It lacks filmmaking flair and a sense of humor, but it's intelligent and serious. When characters speak, their conversations always revolve around important details of story and characterization, and their locutions are rather plain -- far less rhythmically distinctive than the dialogue in "Deadwood," "The Wire" or even "The Sopranos," to name just three HBO dramas considered worthy of serious discussion. There's no, "O this, o that." Nobody says "thou."

The allusions to "imaginative horrors" inflicted on "women, precocious children, and four-legged animals" falsely imply that the series has a penny dreadful sensibility, and that its adult male characters don't suffer as much indignity, injury and death. "Thrones" is violent, but it's not remotely as nasty as John Boorman's "Excalibur" or such current HBO shows as "True Blood" and "Boardwalk Empire." And when it comes to inflicting trauma on its characters, it's democratic. Women, children and animals suffer, but so do men. The series is aware that it's set in an adult male-dominated world and builds that awareness into its scripts. Several key subplots -- notably Daenerys Targaryen (Emilia Clarke) getting strategically married off to a barbarian prince -- are specifically about how women adapt to oppressively patriarchal circumstances. And Patterson's description of a "luxuriantly offensive" sequence that's "either a gladiatorial rape tournament or a 'Jersey Shore' homage" is funny but misleading. It's actually Daenerys' wedding reception, and it's seen through the heroine's eyes as a deranged Bacchanal -- a horror show that makes the oppression she experienced back home seem tame.

At least Patterson cops to never liking fantasy fiction, and even admits (hilariously) to canceling a date in college once he found out that the young woman in question attended Renaissance festivals dressed as a "serving wench." (That detail would have increased my interest, but to each his own.) Better to concede your prejudices upfront than re-frame them as proof of intellectual superiority and smear a genre and its fans as stupid, childish and low-class -- which is what Ginia Bellafante does in her New York Times review of "Thrones."

Like Patterson, Bellafante somehow gets through a whole review without mentioning a single character or scene in detail. The piece is mainly interested in blasting TV for sexing-up the costume drama while de-carnalizing scripted shows set in modern times.

That's an intriguing premise. Unfortunately, Bellafante's gripes don't compute. "It says something about current American attitudes toward sex that with the exception of the lurid and awful 'Californication,' nearly all eroticism on television is past tense," Bellafante says, ignoring the likes of "Hung," "Rescue Me," "Skins," "Episodes," "Weeds," "Nurse Jackie," "Archer," "Sons of Anarchy," "Secret Diary of a Call Girl," and "True Blood," which the author herself cites as an example of HBO degrading its brand.

She also says that "the imagined historical universe of 'Game of Thrones' gives license for unhindered bed-jumping." That's not true. Sex, like violence, has consequences on "Thrones."

Ned Stark's bastard son feels so profoundly out-of-place -- illegitimate in every sense -- that he joins the border guards and moves far away from his blood family. The poor young man's whole life is "hindered"; he's a walking, talking consequence of illicit sex. The dwarf Tyrion Lannister (Peter Dinklage) is seen cavorting with prostitutes, but the show lets us know that this is his only means of satisfying a powerful sexual appetite. His dwarfism neutralizes any sexual advantage that his royal bloodline provides. There's a moment in the second episode where another character chides him for paying for sex -- a remark that shakes Tyrion's self-image as a master cocksman. Daenerys Targaryen's status as a sex slave to her barbarian husband isn't treated in a titillating way; their couplings are depicted rather coldly, as transactions or negotiations. (She makes Khal Drogo look at her face during sex to force him to see her as a person rather than as a receptacle.)

Then there's this doozy of a passage:

"...[Y]ou get that all of this illicitness has been tossed in as a little something for the ladies, out of a justifiable fear, perhaps, that no woman alive would watch otherwise. While I do not doubt that there are women in the world who read books like Mr. Martin’s, I can honestly say that I have never met a single woman who has stood up in indignation at her book club and refused to read the latest from Lorrie Moore unless everyone agreed to 'The Hobbit' first. 'Game of Thrones' is boy fiction patronizingly turned out to reach the population’s other half."

Say what? The implication that women are predisposed to enjoy explicit sex scenes and female nudity may or may not be true, but it flies in the face of conventional industry wisdom about what women want from film and television. Filmmakers and TV producers are more likely to try to appeal to women by avoiding or deleting graphic sex and nudity while leaving in the kissing, cuddling, and heart-to-heart talks -- a patronizing strategy descended from the Old Hollywood "women's picture" and the early days of TV soaps. Is that what Bellafante is alluding to? If so, she's confusing the issue by conflating relationship melodrama with softcore porn.

As for the detail about Martin's work being "boy fiction patronizingly turned out to reach the population's other half," (a) I doubt Martin would have spent so much time on the book's trysts, affairs and marriages if he didn't find them personally interesting, and (b) Marion Zimmer Bradley, Ursula K. le Guin, Carol Berg, Holly Phillips, Juliet Marillier, Lynn Flewelling, Jacqueline Carey and Sharon Shinn would be surprised to learn that they've been writing "boy fiction" all this time.

Imagine if a review of "Deadwood" had mocked the very idea of a Western series telling morally complex adult stories, or if a review of "The Sopranos" proceeded from the assumption that gangster tales are inherently worthless as popular art. You can't. It's unthinkable.

These reviews are also disappointing because they're penned by critics I like. Patterson is one of the sharpest, funniest TV reviewers out there, and Bellafante is the only one of the New York Times' primary TV critics who doesn't write as if the medium were innately unworthy of her time. Something about the subject matter brought out their inner snobs. No other popular genre would be treated with such knee-jerk distaste by critics for major publications.