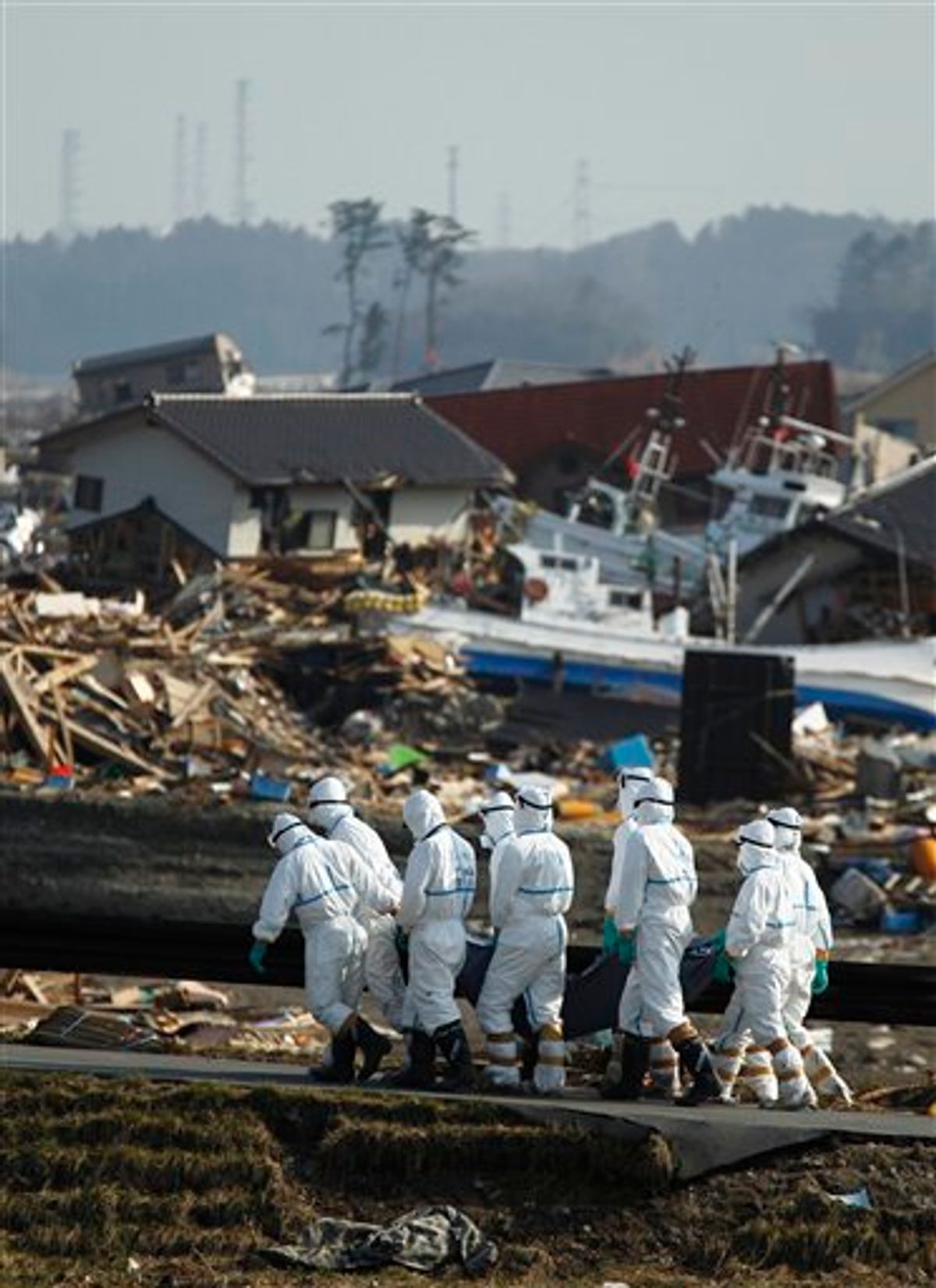 Japanese police officers carry a body during a search and recovery operation for missing victims in the area devastated by the March 11 earthquake and tsunami in Namie, Fukushima Prefecture, northeastern Japan, Friday, April 15, 2011. In the background is part of the Fukushima Dai-ichi nuclear complex.(AP Photo/Hiro Komae) (AP)
--

Levels of radioactivity have risen sharply in seawater near a tsunami-crippled nuclear plant in northern Japan, signaling the possibility of new leaks at the facility, the government said Saturday.

The announcement came after a magnitude-5.9 earthquake jolted Japan on Saturday morning, hours after the country's nuclear safety agency ordered plant operators to beef up their quake preparedness systems to prevent a recurrence of the nuclear crisis.

There were no reports of damage from the earthquake, and there was no risk of a tsunami similar to the one that struck the Fukushima Dai-ichi plant March 11 after a magnitude-9.0 earthquake, causing Japan's worst-ever nuclear plant disaster.

Since the tsunami knocked out the plant's cooling systems, workers have been spraying massive amounts of water on the overheated reactors. Some of that water, contaminated with radiation, leaked into the Pacific. Plant officials said they plugged that leak on April 5 and radiation levels in the sea dropped.

But the government said Saturday that radioactivity in the seawater has risen again in recent days. The level of radioactive iodine-131 spiked to 6,500 times the legal limit, according to samples taken Friday, up from 1,100 times the limit in samples taken the day before. Levels of cesium-134 and cesium-137 rose nearly fourfold. The increased levels are still far below those recorded earlier this month before the initial leak was plugged.

The new rise in radioactivity could have been caused by the installation Friday of steel panels intended to contain radiation that may have temporarily stirred up stagnant waste in the area, Hidehiko Nishiyama of the Nuclear and Industrial Safety Agency told reporters. However, the increase in iodine-131, which has a relatively short eight-day half life, could signal the possibility of a new leak, he said.

"We want to determine the origin and contain the leak, but I must admit that tracking it down is difficult," he said.

Authorities have insisted the radioactivity will dissipate and poses no immediate threat to sea creatures or people who might eat them. Most experts agree.

Regardless, plant workers on Saturday began dumping sandbags filled with zeolite, a mineral that absorbs radioactive cesium, into the sea to combat the radiation leaks.

Meanwhile, the newspaper Asahi Shimbun reported, without citing its sources, that a secret plan to dismantle Tokyo Electric Power Co., which runs the radiation-leaking Fukushima plant, was circulating within the government. The proposal calls for putting TEPCO, the world's largest private electricity company, under close government supervision before putting it into bankruptcy and thoroughly restructuring its assets. Most government offices were closed Saturday, and the report could not be immediately confirmed.

In the wake of the nuclear crisis, the government ordered 13 nuclear plant operators to check and improve outside power links to avoid earthquake-related outages that could cause safety systems to fail as they did at the Fukushima plant, Nishiyama told reporters late Friday. The operators, including TEPCO, are to report back by May 16.

Power outages during a strong aftershock on April 7 drove home the need to ensure that plants are able to continue to operate crucial cooling systems and other equipment despite earthquakes, tsunamis and other disasters, Nishiyama said.

Utility companies were ordered to reinforce the quake resistance of power lines connected to each reactor or to rebuild them. They also must store all electrical equipment in watertight structures. Earlier, the nuclear agency ordered plant operators to store at least two emergency backup generators per reactor and to install fire pumps and power supply vehicles as further precautions.

The massive 46-foot (14-meter) wave that swamped Fukushima Dai-ichi last month knocked out emergency generators meant to power cooling systems. Since then, explosions, fires and other malfunctions have compounded efforts by TEPCO to repair the plant and stem radiation leaks.

TEPCO said Saturday it had moved power sources for some of the reactors at the stricken plant to higher ground by Friday evening in order to avoid another disastrous failure in the event of a tsunami.

Goshi Hosono, an adviser to the prime minister and member of the nuclear crisis management task force, said the damaged reactors were much more stable than they had been earlier in the crisis and TEPCO was preparing to unveil a plan for restoring cooling capacity to the ailing reactors "soon."

"Problems are still piled up and we are far from the end of crisis," he told a TV news program, citing radioactive water as one of the biggest headaches. "I expect there will be more mountains that we have to climb over."

The crisis at the Fukushima plant has forced tens of thousands of people to evacuate the area, while radiation leaks have contaminated crops and left fishermen unable to sell their catches, adding to the suffering of communities already devastated by earthquake and tsunami damage.

Government officials fanned out across the affected areas to explain their decisions and calm nerves.

Deputy Chief Cabinet Secretary Tetsuro Fukuyama apologized for the uncertainty and confusion to residents in Iitate village, parts of which the government recommended be evacuated because of the nuclear crisis.

"Everyone in the village must be extremely troubled, uncertain and worried," he said, promising to provide temporary housing and financial support for the residents, many of them farmers.

In the city of Inawashiro, Hiroshima University Professor Kenji Kamiya, who has been appointed a health risk adviser to Fukushima prefecture, met with about 250 education officials to explain that radiation levels in the area do not pose an immediate or significant threat to the public.

"I hope people understand that the levels we are seeing are fairly low. Even in the most impacted areas, we have screened more than 1,000 children for radiation abnormalities in their thyroids and have found none at all," he said.

Kamiya has been giving almost daily lectures in an effort to prevent people from overreacting to the possible danger.

"People fear things that they don't understand. We were even afraid before of the rain, because we just didn't know if it was safe," said Takaaki Kobayashi, a father of two grade school children. "I feel more comfortable now about sending kids to school. It helps to understand."

Associated Press writers Eric Talmadge in Inawashiro and Elaine Kurtenbach and Noriko Kitano in Tokyo contributed to this report.