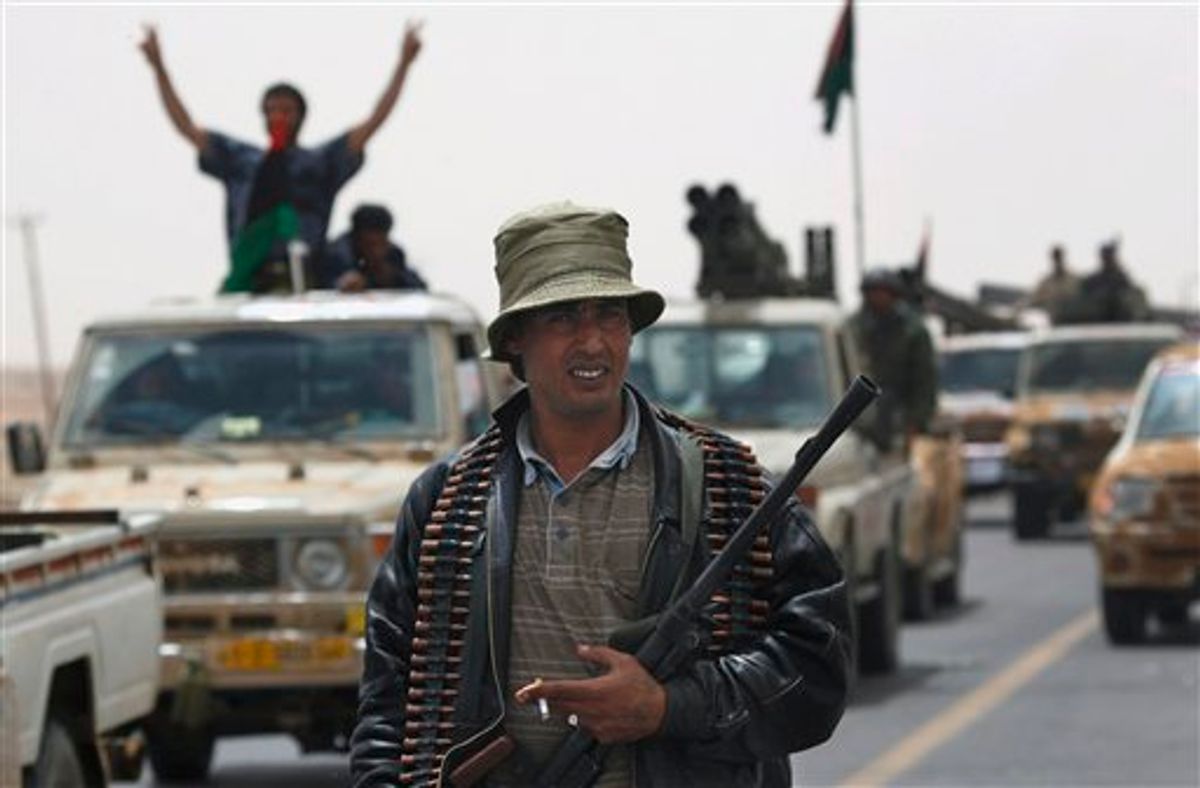 A Libyan rebel fighter guards while a convoy of retreating armed Libyan rebels vehicles pass through the western gate of Ajdabiya, Libya Friday, April 15, 2011. From her father's compound, struck by U.S. bombs exactly 25 years ago, Moammar Gadhafi's daughter sent a defiant message early Friday: Libya was not defeated by airstrikes then and won't be defeated now, she told a cheering crowd. (AP Photo/Nasser Nasser) (AP)
--

Libya's rebel forces have advanced once again to the strategic oil town of Brega thanks to four days of airstrikes by NATO, a rebel officer said Saturday.

Col. Hamid Hassy said that following scattered clashes with government forces, the rebels had reached the outskirts of the key oil facility of Brega, a town that has already changed hands half a dozen times since fighting began in early March.

He added that the rebels will bring engineers to repair any damage to the refinery and oil facilities there.

For four days, rebel forces have maintained their positions around the city of Ajdabiya, about 30 miles (50 kilometers) away, allowing airstrikes to weaken government forces, said Hassy.

The NATO-led campaign of airstrikes have kept rebels from being outright defeated on the battlefield by the better trained and equipped government forces, but until now it has not been enough to completely turn the tide.

At a two-day meeting of NATO foreign ministers in Berlin, the United States and its allies put up a united front on the goals of the alliance's stalemated military mission in Libya but failed to resolve behind-the-scenes squabbling over how to achieve them.

NATO members agreed on paper that Gadhafi had to go to end the crisis, they also made clear that they would not be the ones to oust him.

Past rebel advances through Brega and its sister oil center of Ras Lanouf have ultimately foundered as rebels overextended their supply lines and were routed by the heavier firepower and more sophisticated tactics of the government forces.

Mohammed Kikley, a rebel volunteer, said he was in Brega Friday, but when he tried to return the next day he was stopped by heavy fighting and shelling.

So far, the airstrikes have not been enough to sufficiently degrade government forces to allow the rebels to reach Gadhafi's heavily defended hometown of Sirte, the gateway to the western half of the country.

Airstrikes could still be heard Saturday.

The hospital in Ajdabiya said two rebels were killed in Friday's fighting.

In contrast to their pell mell charges and retreats over the past six weeks, the rebels appear to be attempting a more gradual advance that might actually result in them holding territory.

The rebels acknowledge that their forces -- defected army units and armed civilians -- can't defeat Gadhafi on their own. Mustafa Abdul-Jalil, head of the rebels' National Transitional Council, said this week that without NATO airstrikes, even Benghazi, Libya's second-largest city and the rebels' main stronghold, would be in "complete danger."