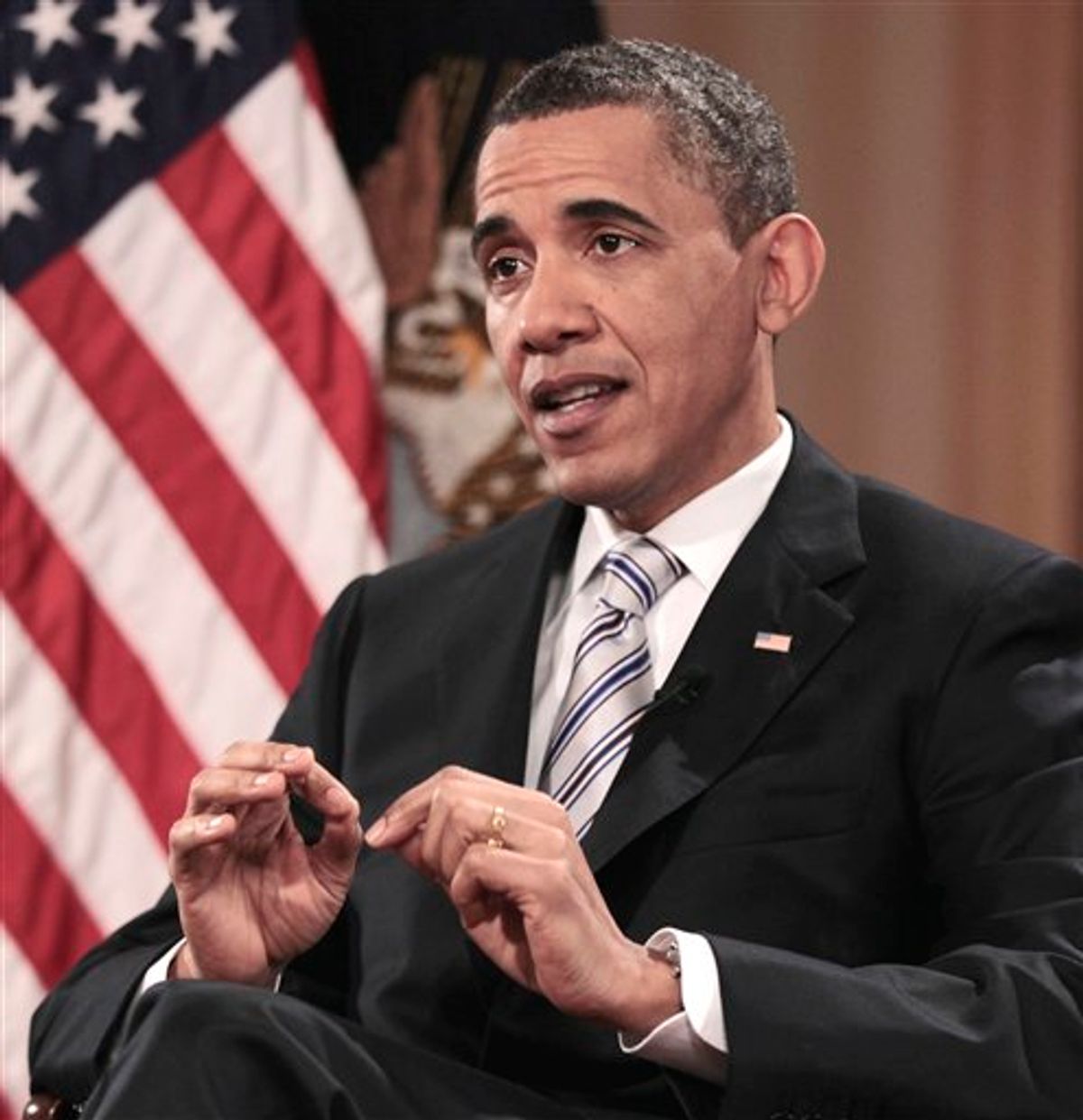 Launching a week devoted to selling his deficit-reduction plan, President Barack Obama on Saturday drew sharp contrasts with a House Republican budget that he says offers a vision that "is wrong for America."

In his weekly radio and Internet address, Obama charged Republicans with seeking to dismantle venerable safety net programs and choosing tax cuts for the wealthy at the expense of students paying for college or older adults on Medicare.

"To restore fiscal responsibility, we all need to share in the sacrifice - but we don't have to sacrifice the America we believe in," Obama said.

The criticism echoed his speech Wednesday in which he unveiled a $4 trillion deficit-reduction plan over 12 years, a goal he says he can achieve with a blend of spending cuts, changes in major government health care programs and tax increases.

Obama plans to continue his plan's pitch throughout the week, holding town halls in Northern Virginia Tuesday and in Palo Alto, Calif,, and Reno, Nev., later in the week during a Western tour that includes at least two Democratic Party fundraisers.

While trying to cast the debate in his own terms, the president's attention to fiscal discipline signals a watershed in national politics. After two years devoted to priming an anemic economy with new spending and passing an overhaul of health care, Congress and the White House are beginning a debate about how to tame long-term deficits and a crushing debt of more than $14 trillion.

In the Republicans' weekly address, Sen. Tom Coburn of Oklahoma called that turning point "a monumental shift for Washington."

Still, Obama predicted in an interview with The Associated Press on Friday that fundamental questions about how to change giant benefit programs like Medicare and Medicaid or how to change the tax system might have to wait until after the 2012 presidential elections.

He conceded, however, that he would have to offer spending cuts to win votes in the Republican-controlled House for an increase in the debt limit. The debt will hit its ceiling of $14.3 trillion by mid-May, and administration officials say the cap must be raised by no later than early July.

And while Obama, in the interview, predicted a "smart compromise," his address Saturday left little room for common ground with the House Republican budget. That plan, approved by the House Friday, would reduce deficits by $4 trillion over the next 10 years. It would extend Bush-era tax cuts at all income levels, repeal Obama's health care law and overhaul of Medicare by providing future retirees a voucher-style federal payment to purchase coverage from private plans.

"It's a vision that says that in order to reduce the deficit, we have to end Medicare as we know it and make cuts to Medicaid that would leave millions of seniors, poor children and Americans with disabilities without the care they need," Obama said.

Obama has adopted a sharper, partisan tone since announced his re-election bid more than a week ago.

"Instead of describing the threat and bringing both sides together, the president attacked those who have a different vision of the government," he said.

Coburn is one of a bipartisan group of six senators working to find a compromise on long-term deficit reduction. The group has not tipped its hand as its members continue to seek common ground. They have not set a timeline for achieving a compromise.

Coburn, however, praised the House Republican Medicare proposal, suggesting that the so-called Gang of Six may still have a long way to go before reaching a compromise.