Is this the real NAFTA Superhighway?

A planned pipeline connecting Canada to Texas could pose a real threat, unlike the mythological NAFTA Superhighway 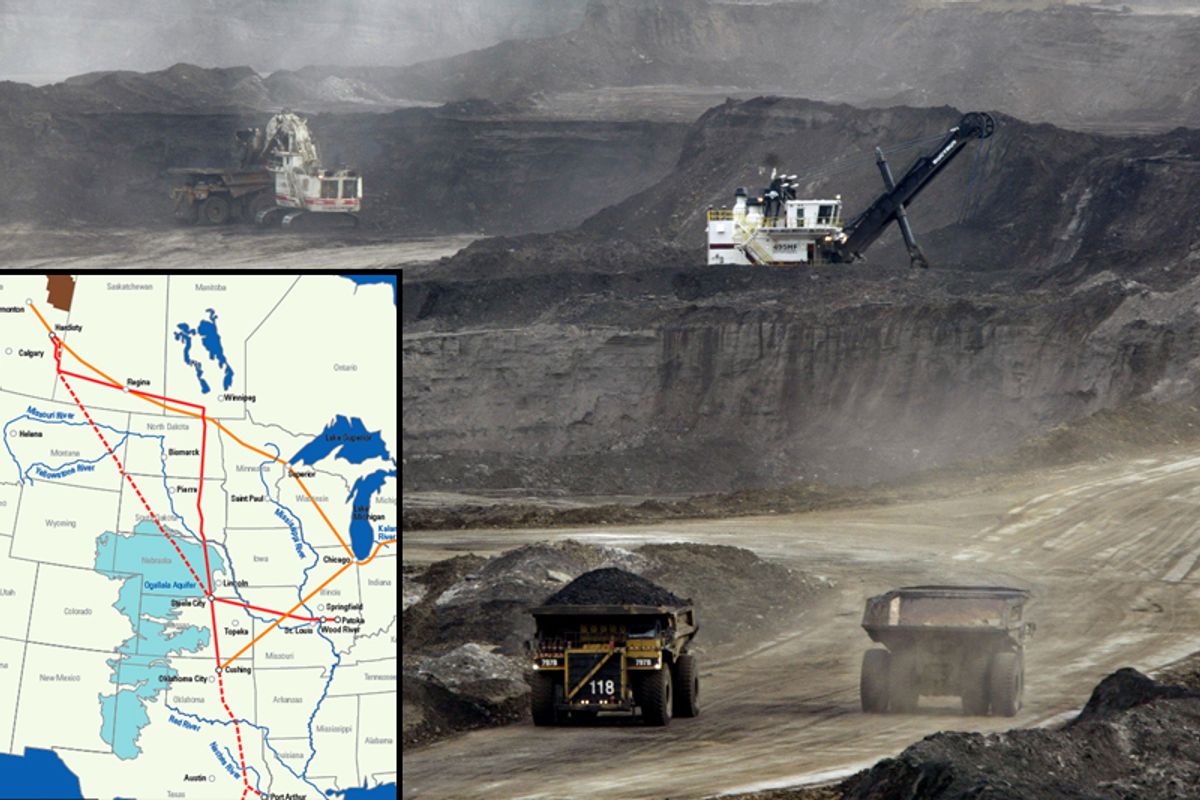 Mining trucks carry loads of oil-laden sand after being loaded by huge shovels at the Albian Sands oils sands project in Fort McMurray, Alberta, Canada. Inset: A map of the pipeline
--

In the mid-2000s, a conspiracy began to take hold about the so-called NAFTA Superhighway. This giant construction project -- one involving huge multi-lane highways, rail lines and oil pipelines snaking through the heartland and connecting the U.S., Mexico and Canada -- was supposed to represent a major blow to American sovereignty and presage the creation of a transnational "North American Union."

The whole thing, of course, was bunk. But I thought of the NAFTA Superhighway, when I read this past week about Keystone XL, a very real proposal to build a 1,700-mile pipeline to transport oil from Canada's tar sands region to the Gulf Coast. This is the illustration that was circulating on the Web of the supposed NAFTA Superhighway: Unlike the NAFTA Superhighway, Keystone XL could represent a real threat to America, according to environmentalists.

Since Keystone XL would cross an international border, it requires State Department approval. Critics have been trying to convince the administration to reject the proposal on the grounds that extracting oil from Alberta's tar sands is extremely destructive to the land, that tar sands oil produces more greenhouse gas emissions than conventional oil, and that potential pipeline leaks could threaten water supplies relied upon by hundreds of thousands of Americans. Proponents argue the pipeline would offer economic benefits and provide energy from a nearby and friendly nation.

To find out what's at stake in this fight, I spoke with Susan Casey-Lefkowitz, international program director for the Natural Resources Defense Council, which fiercely opposes the Keystone XL project. The following transcript of our conversation has been edited for length and clarity.

Can you describe what the proposed project is?

All of the major oil companies are up in Canada going after an unconventional fossil fuel called tar sand. It gets changed into gasoline and diesel eventually but it starts out as this heavy, thick, almost coal-like substance that goes through a lot of processes that use up a lot of energy and water. What the oil companies want to do is pipe it down to the U.S. Gulf Coast. So they want it to travel through a brand-new pipeline called Keystone XL. It would go from Alberta, Canada, down through Montana, and all the way to the heartland of the United States across the Ogallala Aquifer -- which is a major source of freshwater for eight states -- and down to the Gulf Coast refineries.

Why do they want to do this?

Canada has reached the limit on how much tar sand oil its own operators can process. So the oil companies have been looking to U.S. refineries to provide capacity for upgrading and refining tar sands.

Describe the tar sands. How is extracting oil from the sands different from getting conventional oil out of the ground?

To get conventional oil you basically stick a pump in a well, and a relatively liquid substance comes out that you then refine into gasoline, diesel and other fuels. Tar sand is a different animal. It’s a very heavy, thick substance, deep underneath forest and wetland wilderness in Canada. You get at it by either strip-mining and then washing with hot water the sand that you dig out from under the forest; or you get it by drilling down and pumping steam under the earth to heat the earth for months at a time in order to melt the sand enough that you can pump it back up. Even once you’ve done this, it’s still really heavy, really thick. We've found that it's often much more corrosive and more dangerous to have in a pipe than conventional oil -- more likely to cause a leak.

What is NRDC's take on the proposal?

We think we don't need an expansion of tar sand. Tar sand is getting way beyond the environmental capacity and the social capacity of the region where it's being strip-mined and drilled. Not only does it require so much energy to produce, but it has much higher greenhouse gas emissions. And the fact that we're continuing to go after these very dirty fossil fuels at a time when we're trying to switch to cleaner energy -- it seems like the wrong direction for the United States to be taking.

Are the environmental concerns then primarily on the extraction end? Or is there danger on the pipeline itself?

There are a number of concerns. Extraction itself is very damaging. It rips up forest wilderness, hurts migratory birds, it causes much higher greenhouse gas emissions, and there are big problems from the huge toxic waste dams that they build. But in addition, when you build a pipeline to carry this more corrosive material, you also have a much higher risk of leaks. We don't have adequate safety regulations to take care of it, especially when you have a pipeline over a water source like the Ogallala Aquifer, which serves over 2 million people in America's heartland. You're sort of asking for another disaster on the scale of the BP oil spill.

What is the argument that the company is making?

What the industry is saying is that we need additional oil for our energy security in the U.S., so we want to get it from places like Canada. What we in the environmental community say is that real energy security is going to come from clean energy sources. It's not going to come from continuing this addiction we have to fossil fuel. That only ties us into the global oil market, which we can see right now is not very good for our pocketbook.

Are there signs from the Obama administration on which way it's leaning right now?

It’s too early to tell. The administration has a duty to go through the process without prejudging it. They have been careful not to make statements that would indicate whether they are for or against the pipeline. They’re doing the environmental review process; we’ll see how much longer that needs to take. After that, there's another process where they have to decide if the pipeline is actually in the national interest. We don't think it is. Only after that will they be making a decision, so I think the earliest we would see a decision on the pipeline itself is at the end of this year.

What do you say to the argument that even if the U.S. rejects the pipeline, it won’t affect the level of tar sands production because it will just be sold to other markets?

Right now Canada only has the United States and its own market. There is no other market for tar sands oil. There is no pipeline to get it to a port from which it could go to other parts of the world. There’s a proposed pipeline to take it out to the Pacific Coast, but there’s huge opposition in Canada to that pipeline, so I don’t see that being built any time soon. Really the U.S. is the market. And so what the U.S. decides to do, that will have a big impact on what the Canadians do.