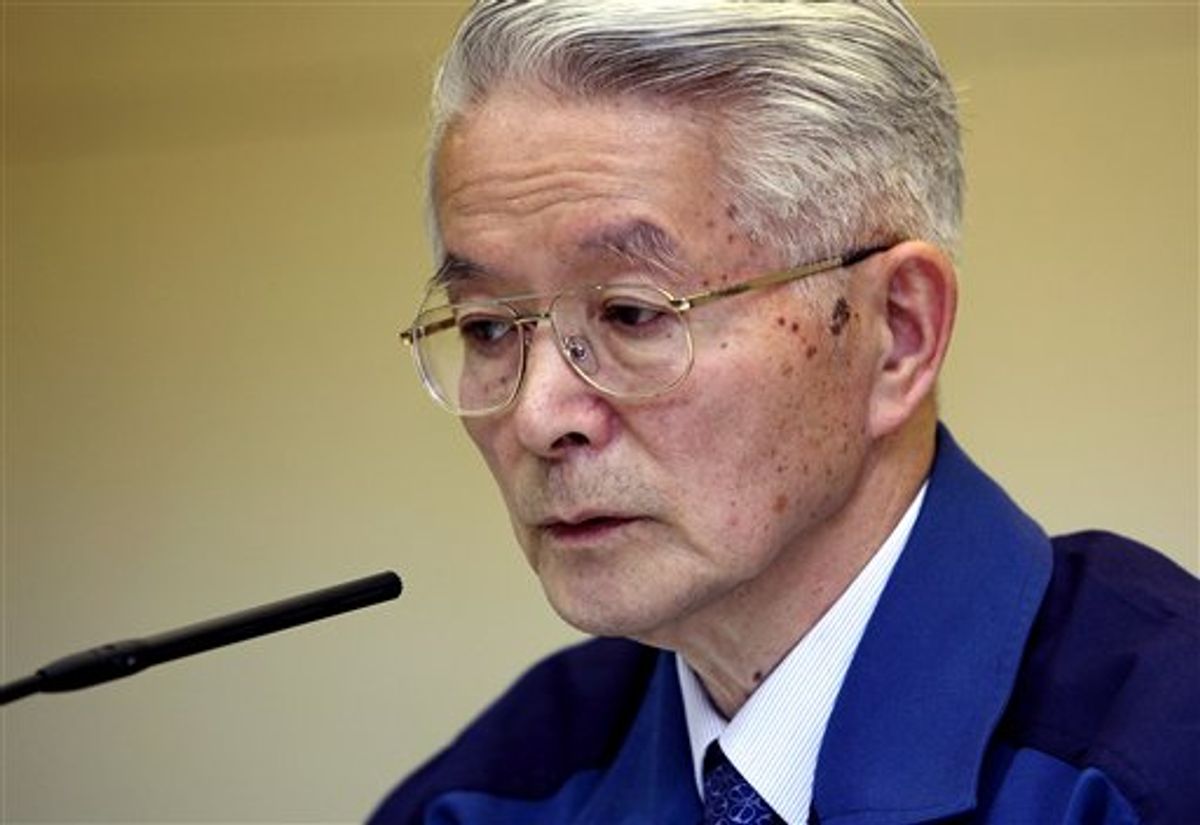 Tokyo Electric Power Co., (TEPCO) Chairman Tsunehisa Katsumata speaks during a news conference at the company's headquarters in Tokyo, Sunday, April 17, 2011. TEPCO, the operator of the crippled nuclear power plant leaking radiation in northern Japan, announced a plan Sunday that would bring the crisis under control within six to nine months and allow some evacuated residents to return to their homes. (AP Photo/Shuji Kajiyama) (AP)
--

The operator of the crippled nuclear power plant leaking radiation in northern Japan announced a plan Sunday to bring the crisis under control within six to nine months and allow some evacuated residents to return to their homes.

The roadmap for ending the crisis at the Fukushima Dai-ichi nuclear power plant, presented by Tokyo Electric Power Co. Chairman Tsunehisa Katsumata at a news conference, included plans to cover the damaged reactor buildings to contain the radiation and eventually remove the nuclear fuel.

"We sincerely apologize for causing troubles," Katsumata said. "We are doing our utmost to prevent the crisis from further worsening."

Frustrations have been mounting over TEPCO's failure to resolve the nuclear crisis more than a month after a catastrophic earthquake and tsunami hit Japan on March 11, knocking out power and cooling systems at the Fukushima Dai-ichi complex.

Katsumata, who was hammered by questions over his management responsibility, told reporters he was considering stepping down because of the crisis.

"I feel very responsible," he said.

Katsumata said he was not sure when the tens of thousands who had been forced to flee their homes because of the crisis could go back, but Trade Minister Banri Kaieda said some could return home within six to nine months.

"Of course, some people will be unable to return home, but we will keep everyone informed," he said, adding that the government hoped TEPCO could contain the radiation sooner than the schedule announced Sunday.

The company is focusing on cooling the reactors and spent fuel pools, decontaminating water that has become radioactive, reducing the amount of radiation released into the atmosphere and soil, and lowering radiation levels in the evacuation area, he said.

During the first three months of the plan, the company hopes to steadily reduce the level of leaking radiation, Katsumata said. Three to six months after that, it hopes to get the release of radioactive materials firmly under control, achieve a cold shutdown of the reactors and temporarily cover the reactor buildings.

"I believe we will succeed in containing the crisis," Katsumata said.

The company also outlined plans for permanently covering the buildings and closing down the reactors, but that will take years, officials said.

Kaieda, the trade minister, said he hoped to see the process quickly "shift from the first aid phase to a systematic and stable phase."

In a show of support for a staunch American ally, U.S. Secretary of State Hillary Rodham Clinton expressed admiration and sympathy for the Japanese as she visited Tokyo on Sunday.

"We pledge our steadfast support for you and your future recovery. We are very confident that Japan will demonstrate the resilience that we have seen during this crisis in the months ahead," Clinton told reporters after meeting with Foreign Minister Takeaki Matsumoto.

Prime Minister Naoto Kan, fighting criticism of his administration's handling of the disaster, said in a weekend commentary in the International Herald Tribune that "Bringing the situation under control at the earliest possible date is my top priority."

As Japan has begun planning for reconstruction and mulling how to pay for it, Kan's political opponents have resumed calls for his resignation after refraining from criticism in the immediate aftermath of the disaster.

Thanking the international community for its support, Kan vowed to rebuild a country "highly resistant to national disasters."

"I pledge that the Japanese government will promptly and thoroughly verify the cause of this incident, as well as share information and the lessons learned with the rest of the world to help prevent such accidents in the future," he said in the commentary, which also appeared in the New York Times and Washington Post.

Government officials fanned out across the affected areas during the weekend seeking to explain evacuation decisions and calm nerves. Chief Cabinet Secretary Yukio Edano met Sunday with the governor of Fukushima, who has vigorously protested the predicament the nuclear crisis poses for his prefecture.

"The safety of residents is our foremost priority," Edano said. "I told the governor that the government will do everything it can to prevent the crisis from worsening."

Explosions, fires and other malfunctions have hindered efforts to repair the stricken plant and stem radiation leaks.

Officials reported late Saturday that radioactivity had again risen sharply in seawater near the plant, signaling the possibility of new leaks. Workers have been spraying massive amounts of water into the overheated reactors and spent fuel storage pools. Some of that water, contaminated with radiation, has leaked into the Pacific.

Plant officials said they plugged that leak on April 5 and radiation levels in the sea initially dropped. Authorities have insisted the radioactivity will dissipate in the ocean and poses no immediate threat to sea creatures or people who might eat them. Most experts agree.

Regardless, plant workers on Saturday began dumping sandbags filled with sand and zeolite, a mineral that absorbs radioactive cesium, into the sea to combat the radiation leaks.

TEPCO said it plans to establish a system to recycle cooling water that will remove radioactivity as well as salt left behind by seawater that was earlier used as an emergency cooling measure. Salt corrodes the reactors and interferes with the cooling system.