When we all fought over the phone 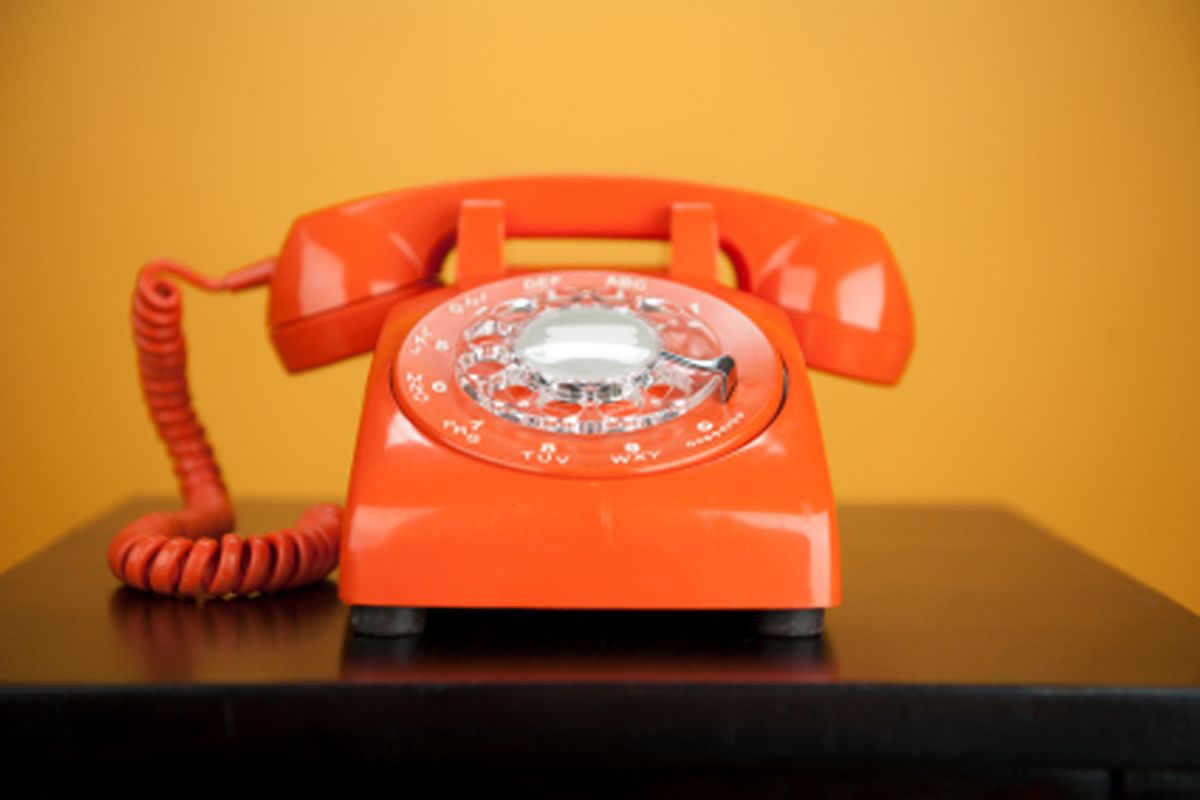 The other day, when I confessed to my husband that I had requested a "copy" of the online journal our college-age niece edits, he bent down at the knees, pawed the air, turned his face to the ceiling, and let out a mournful roar. That would be a woolly mammoth, sinking into the tar pits at La Brea.

I get this sort of thing a lot. And I've always been a good sport about it. I surrender the keyboard or remote control at the first exasperated sigh of a child grown impatient with my fumbling. Like the elderly relative who each year exclaims, "My, how tall you are!" I make all the requisite noises of awe for the high-tech gadgetry that has allowed music, video and communications to go completely mobile, breaching all boundaries of space and time, not to mention for the skills that let people surf this extraterrestrial wavelength with aplomb. All hail the fleet and nimble thumbs of youth.

Well, maybe it's the ravages of peri-menopause, but lately I find my mood has changed. Faced with a seemingly endless torrent of hoopla over the mind-bending possibilities of this or that next-generation smartphone, I want to say, quoting a phrase from my own youth, big whoop. When my children, at 10 and 14, cock their heads, wearing an expression of forbearance, and tell me, "Mom, you don't really understand our culture," I find myself wanting to yelp, "Right back atcha, dearies!"

How could they understand? They weren't around in the Nehi-orange, slap-happy 1970s, the decade that encompassed the bulk of my childhood. We had no inkling about MP3 players, laptops, tablet computers, the Internet, video streaming, cellphones, GPS-enabled hand-held devices, or even cable television, for crying out loud. But we had just as strong a cultural and psychological investment in the technologies we did have. If today's kids are like hunter-gatherers packing their lightweight tools wherever they roam, we were homesteaders gathered around our warm and lovely technological hearths.

When I was a child, my family watched TV, listened to records, and talked on the phone only in fixed locations inside our own home, at more or less circumscribed times. All Americans did. Now, without a second thought, we're uncoupling these enjoyments from domestic life in a shift that may turn out to be as momentous as when Americans evicted childbirth and death from their homes in the early twentieth century.

I'm not saying it's bad. I'm just saying let's take a moment to reflect. I'm saying that maybe some day long hence, people will want to know what it was like when telephones were literally tethered to the kitchen wall. Come close, and I'll tell you: It was awesome.

First of all, the receiver. It was only a receiver -- no buttons, no screen, no folding mechanism, just this smooth, solid, ergonomically elegant object meant to be held to the ear. And the corkscrewy cord confined you to a small sphere where what you did was simply this: talk on the phone. I remember looping this cord around my finger as I lay on the floor next to the refrigerator, its motor gently humming and warming the linoleum. Or I'd sit on the back stairs, communing with the coats and purses and dog leashes. And the sound quality! Reach out and touch someone. That's what it was like. No traffic, no grocery clerks, no huffing and chuffing as the person you're talking to dashes for the bus.

Phone numbers were associated, not with individuals, but with households. Any number we were likely to use again we scribbled on the side of a cupboard beside the phone. Each number had its own position and style and became a little memento of the day you wrote it down; together these jottings formed a spatial representation of the whole family's relationships, formed, continued, occasionally abandoned.

My children, who use cellphones almost exclusively, are strangers to the fact that apparently separate telephones may be connected to a single line, which in turn is embedded in the walls of the house. So they don't really get certain fond traditions of my youth. Like fighting over the phone. Listening in on someone else's conversation (you must raise the receiver ever so gently from its cradle). Or bellowing across the house for a call's intended recipient to pick up! in another room. My children will never know the exquisite fright of a friend's parent breaking in to snap, "I told you to get off an hour ago!"

Recorded music also was once a more physical, palpable thing than it seems today, and it, too, lived in the house. Songs couldn't be stored individually on computers, phones and iPods, but emanated in a predetermined order exclusively from speakers connected to the turntable in one corner of our living room. If you were listening, everyone on the first floor was listening. Everyone in the family anticipated the scratch in the third song of Fleetwood Mac's "Rumours" and experienced the whirr and slap of another record in the stack dropping into place. I will always associate Stevie Wonder's "Songs in the Key of Life" with Louisa May Alcott's "Little Women," because I read the book in a chair by the window as someone played that record into the ground. For me the indomitable dark-haired Jo will always move to the song "Isn't She Lovely?" surrounded by the tangerine nimbus of the album's cover. I don't know if you'd call that an "interface," but it's something. And the sound, again: It registered like the mouthfeel of butter, round and warm and bright.

The most important technology of my formative years, however, was the lordly and massively built television. Beat it as you might with the broom stationed nearby for that purpose, this TV provided a stable picture at its own discretion. It sat in the living room and went nowhere. You came to it. If, for instance, you wanted to view "The Mary Tyler Moore Show," you parked your butt on the couch Saturday night at the appointed hour, period. No do-overs. Ink has been profligately spilled in laments for the family table, but who's kidding whom, it was the television that really brought us together. My dad often made hot fudge for sundaes after dinner, and let me tell you, ice cream and the easy laughter of a sitcom bonds people like Krazy Glue for life.

Or think of the rainy days when we sank wholly unsupervised into that deep '70s pile to watch and watch and watch the great glowing beast with a sibling or a friend. Notwithstanding the purportedly prodigious screen time and resultant obesity of today's kids, I defy them to achieve the state of open-mouthed stupefaction we did watching reruns of "Gilligan's Island." I guess our moms were on the back stairs talking on the phone. It's a wonder we didn't choke on our own saliva.

Those shows didn't travel. They were grounded in the occasion, inextricably tied to the house you watched them in and the people you watched them with. Not long ago, my brother and I got to reminiscing about the series "Daniel Boone," which we occasionally watched together when we were very little. To settle a friendly disagreement about its theme song, he went to YouTube, summoning with a few keystrokes the grainy coonskin-cap-wearing figures striding around to that simple melody. This led to a little more YouTube mining, and my brother ended up showing my son the opening credits to "Ultraman," "Hawaii Five-O" and "Bonanza" as well. The boy was charmed. Walking home, he asked me why on earth I'd never shown him that stuff before.

The answer was that it never crossed my mind those scenes might "live" anywhere besides at a certain address in a different city way back when. It's a basic orientation toward technology I've retained despite, in fact, possessing and using a reasonably large assortment of today's mobile technologies. I haven't worked with a desktop computer for years, but my laptop acts like one. I slide up in my rolling chair and kind of dock myself to it, enter it wholly for hours, then push away like a wheezing ferry at the end of the day. Only very occasionally do I carry my computer around town, in a nervous tizzy, as if I'd stuffed a glowing coal into my messenger bag, or some piece of myself -- my liver, maybe.

Don't get me wrong, I get it: the mobilization of technologies means you can access all sorts of appealing stuff whenever, wherever, and with whomever you like. It proffers a little thing called personal freedom. And what red-blooded American wouldn't grab hold of that? I myself was nothing but psyched a few nights ago when, stressed out and looking for some distraction to slow my pulse, I was able to flop down in the kids' room and, through their Wii, instant-stream two episodes of the Edwardian manor-house drama "Downton Abbey." Just what the doctor ordered! The youngsters, of course, cleared out, that particular luxe fantasy land being not quite to their taste. It'll be there should they ever decide to give it a chance -- an unlikely event, since even the most tiresome crosstown bus ride affords a million other options, from once again viewing the weird short video "Where's the chapstick?!?" to browsing through photos of themselves trying on silver tube dresses at American Apparel to interacting with friends and family (including their grandmother) in such virtual communities as Facebook, Farmville or Neopets.

Freedom has an irresistible momentum that can't help taking us in different directions. It changes the way people absorb media, making the experience a little more abstract and separate. But I think what troubles me more is how this new mobility shifts the house from the center of things. It erodes the primacy of home, which after all is defined by literal walls, a very old technology indeed whose function is not to engender flux but on the contrary to keep some things out, and other things in. As cherished pleasures and social opportunities untie themselves from the house and fly out the door in somebody's pocket, will people still find reasons to come home again?

Gosh, I hope so. I still haven't seen the finale of "Downton Abbey," and -- guys? yoohoo! -- I'm going to need some help with that Wii remote.

Katharine Greider is a freelance writer and author of "The Archaeology of Home: An Epic Set on a Thousand Square Feet of the Lower East Side" (March 2011: PublicAffairs).