The legend of the persecuted white guy 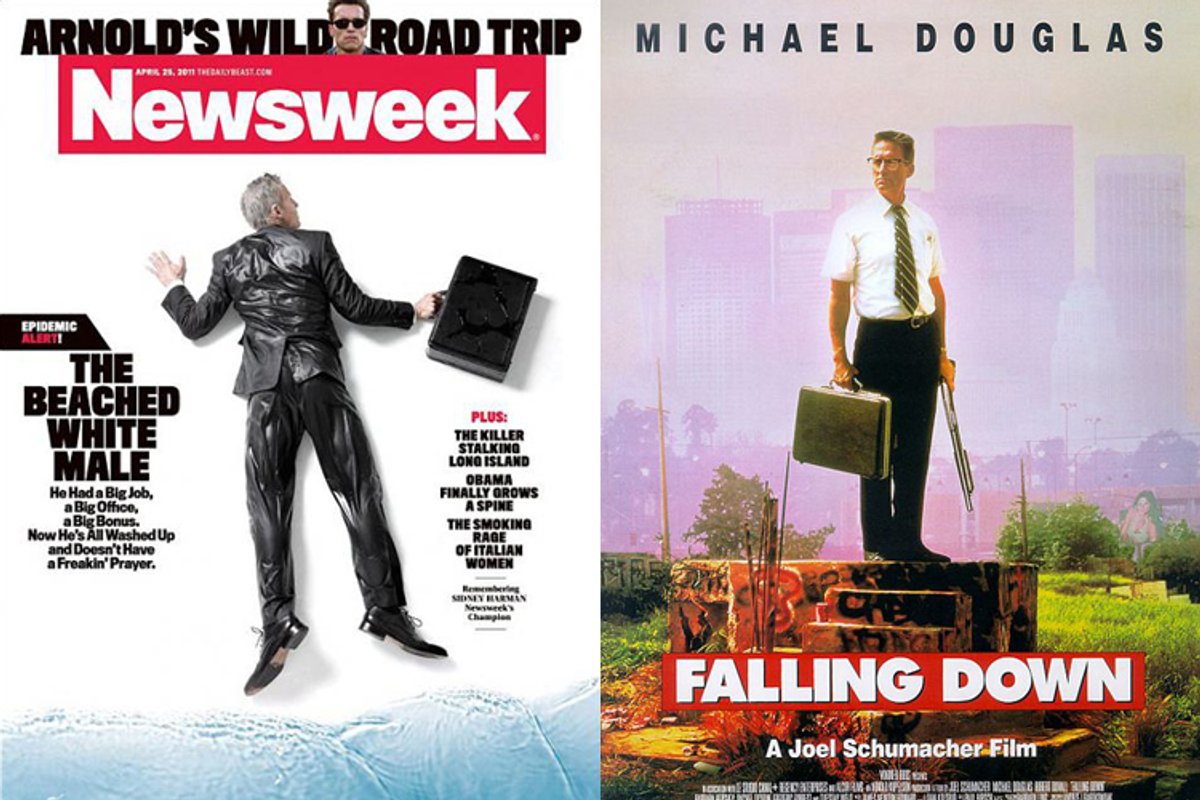 "The Beached White Male" -- this bellowing cover headline from the new issue of Newsweek is only the latest installation of the most resilient parable in American cultural mythology: The Legend of the Persecuted White Guy.

This narrative has been part of the media mix for the larger part of the last few decades, from the 1980s when it was alleged that civil rights initiatives (affirmative action, busing, etc.) were persecuting whites, to the last decade, which lamented whites as "America's forgotten majority," to the present political moment in which the first African-American president is accused of caring only about his fellow minorities and harboring "a deep seated hatred of white people."

Newsweek's iteration of this Persecuted White Guy story, which claims that the economy is now rigged to make sure white males "don't have a freakin' prayer," follows USA Today's implication that "older white males [are] hurt more by this recession" than anyone else, and New York Times columnist Ross Douthat's (subsequently discredited) argument that "white anxiety" is justified because white working-class students are supposedly among "the most underrepresented groups" at elite universities.

In each version of the legend, the characters and specific events change -- sometimes the stars are beefy white guys watching factories leave "real America" for Mexico, other times it's celebrated "Office Park Dads" in coastal enclaves seeing their jobs offshored to China. Either way, the establishment media's official story never seems to deviate from the tale of D-FENS in the 1993 film "Falling Down": Virtuous, patriotic white males are under more intense assault than any other group.

To be sure, many individual white males have been hurt by past recessions, and many more have been hit hard by this one, too. But the obsessive and disproportionate focus on the plight of this particular demographic actually contradicts the underlying theory of white victimhood. Far from being "forgotten," persecuted or "without a freakin' prayer," white men still very much retain their cherished privilege, so much so that their problems are presented by the media as the most pressing national emergency -- even when, on the whole, white men still occupy a comparatively enviable position in our economy.

For example, the Huffington Post recently reported that while the March jobless rate for white workers dropped below the overall national average to 7.9 percent, the unemployment rate among black workers increased from 15.3 to 15.5 percent. In case you think that's some momentary product of recessionary economics, remember the recent Center for American Progress report showing that "the employment rates of African-American men remained stagnant even during the economic booms in the 1980s and 1990s." It's also not a product of education levels -- as the New York Times recently noted that, among college graduates, the white unemployment rate has been roughly half that of the black unemployment rate.

Indeed, so powerful and consistent is white male privilege in America that a group of respected civil rights groups last year filed a United Nations complaint arguing that "the over-representation of women and racial and ethnic minorities in unemployment, underemployment, and poverty" violates the United States' obligations under international treaties.

In light of all this, how can Newsweek look at the undeniable crisis of black unemployment and then devote a cover exclusively to the economic troubles of white males? How can the Legend of the Persecuted White Guy persist?

And there's a reason why the media is eager to cover their antics. A white male dominated elite media is, by virtue of its complexion and its largely white audience, overly responsive to fear-mongering about white males being under attack -- no matter how substance-free the fear-mongering may be. This dynamic is only intensified by the fact that after so much repetition, the Legend of the Persecuted White Guy has become a form of cultural shorthand -- one of those unquestioned-yet-unsubstantiated tropes like "higher taxes hurt the economy" or "free trade creates jobs" that reporters and editors regularly rely on as a lowest common denominator for content.

The legend's perseverance is also motivated by a backlash to change -- no matter how overdue, slight or circumstantial. Nixon and later Reagan's versions of the legend echoed the white backlash of civil rights movement successes; Buchanan's legend found underground traction, in part, as a backlash to cultural bigotry being drubbed out of polite society; and today's version has emerged as a backlash to the election of the first black president and -- as importantly -- to the slight reduction of the white-black unemployment gap. As USA Today briefly pointed out, the recession has marginally reduced the traditional "racial gap in unemployment, largely because white men are doing so much worse than usual."

The "usual" bit is the key point. The "usual" was white males for decades being even more disproportionately insulated from overall economic turbulence than they are now. That meant, as the Bay Area News Group reports, an "unemployment rate for men aged 55 and older (that) averaged 3.7 percent, and reached 7 percent in only a single month -- February 1950."

So, sure, while white males still remain way ahead of and way more financially insulated than most other demographic groups, it's true -- they are just a tad more susceptible to brutal economic forces than they once were. Somehow, though, the fact that everyone else has been subject to those economic forces for decades doesn't seem to matter, nor does the fact that most other groups still have it worse.

Somehow, the legend of the Persecuted White Guy trumps all.