Shows like "Nurse Jackie" show how easy it is to run needless tests -- and one, in particular, could spell danger 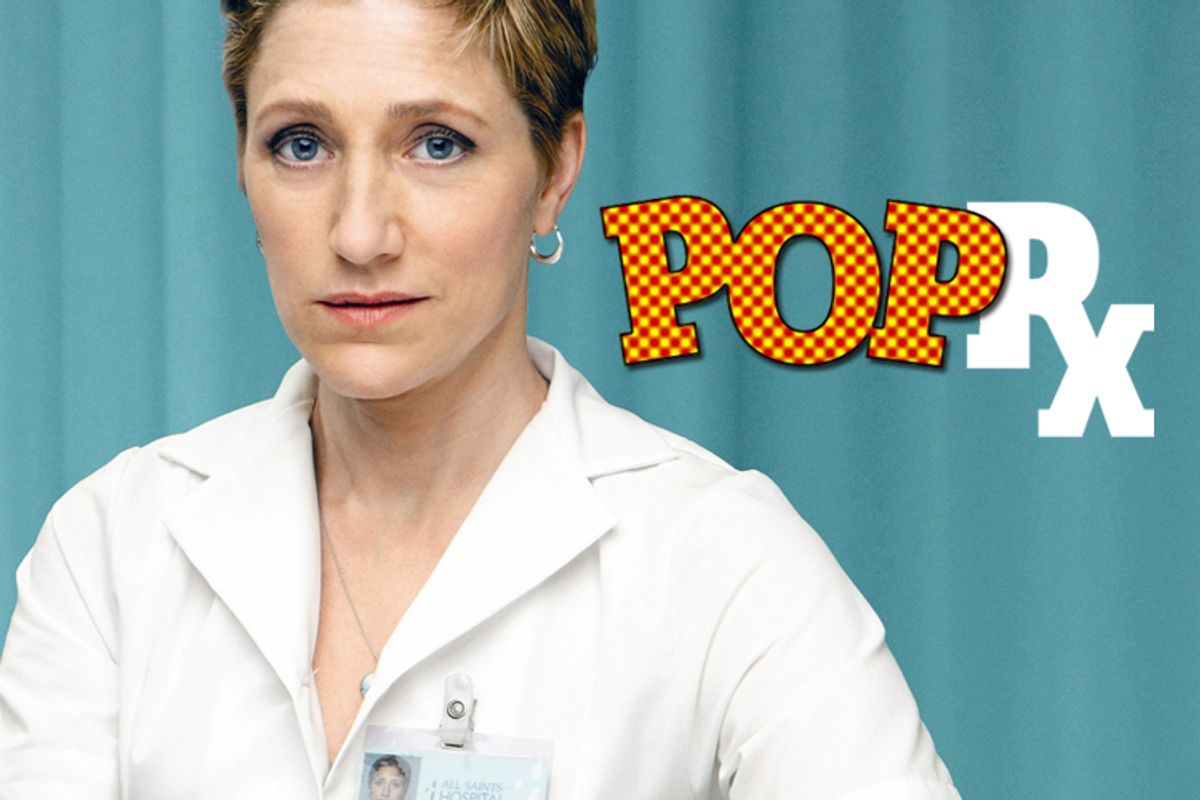 On a recent episode of Showtime's "Nurse Jackie," a boy comes in to the emergency room with a handle protruding from his left nostril. The boy, it turns out, has shoved a small mirror into his sinus cavity.

Dr, Cooper (Peter Facinelli) orders an X-ray, but that's when Nurse Jackie intervenes. "Let's get him a scan," she whispers.

But Jackie presses him. "He wants to see his brain," she says. "Show him his brain."

Cooper smiles. "Using my powers for good -- I like it," he says, ordering the boy a Computerized Tomography scan, better known as a CT scan. CT scans give doctors the uncanny ability to illuminate cancerous tumors, blockages in blood vessels that cause strokes, an inflamed appendix, and other sicknesses inside the body (though they’re not at all necessary to find plastic stuck in a sinus cavity). They’re X-rays on steroids.

The scene is satire, but it demonstrates how easy it is for doctors to run unnecessary tests on their patients. The scene also had uncanny timing. Just after the episode aired, a study came out showing just how often kids in emergency rooms get CT scans. The real-life answer, as suggested by "Nurse Jackie," is "a whole lot more than they need."

According to the study, published online in the journal Radiology, the number of CT scans performed on kids in the emergency room increased a whopping five-fold between 1995-2008, from about 330,000 to almost 1.7 million a year.

And that's a problem, because CTs expose children to higher levels of ionizing radiation than any medical procedure, raising the risk -- ever so slightly but very clearly -- that some of those kids will develop cancer in their lifetimes. Here's how one pediatric surgeon put it: "CT scans are like mini-Hiroshima bombs, four such scans on a kid are equivalent to the radiation exposure that the survivors were subjected to in 1945."

Statistics suggest that 1 to 2 out of a hundred people who get scanned will get cancer as a result. Kids constitute the highest risk group because they’re young (giving them more time to get cancer) and because their bodies are more sensitive to the radiation that CTs rain on their bodies.

Physicians order volumes of CT scans in kids (and adults, whose number of scans have also increased dramatically over the past two decades) for a multitude of reasons. For one, it’s what we’re taught to do when we learn how to doctor. Residents are rewarded when they assess every nook and cranny of their patient for the disease's cause and effect. To miss something is to risk being publicly shamed during rounds. So we order tests -- a lot of them. When we graduate, we practice no differently than we were taught.

Second, ordering CTs makes business sense. In a health care market where doing more means making more money, CT scanners are big sources of profit. A single scanner costs close to a million dollars. At an operating capacity of 10-15 patients a day (easily exceeded by most hospitals), a hospital or imaging center that invests in one will recoup its costs in about a year. Many doctors also have ownership stakes in the machines or centers to which they refer patients, so their financial incentives to run more scans are aligned like stars. Although the U.S. has the fourth highest number of CT scanners in the industrialized world, we order the most scans.

Third, and this is particularly important for kids, modern scanners are like a drive-thru at McDonald’s: really convenient and fast. The patient lies down on a table that slides through the circular machine that ,even today, looks like it came from the future. Doubtless you've seen this in movies and hospital dramas. But the process has simplified dramatically over the years. In the past, CT scans took so long that many children had to be sedated so they wouldn’t move. That required more risk and work on doctor's part (consult anesthesia, prescribe drugs and monitor the child closely before, during and after the scan). Modern scanners, however, are much zippier. They can get the job done in about a second.

But all that aside, there's something more profound that’s driving doctors to irradiate more kids in the name of health. Let me illustrate that with the following story.

Early in my career, the father of a 9-year-old girl brought her in with belly pain and vomiting. There was nothing in the child’s history that suggested a problem like appendicitis or a tumor -- problems that a CT may have helped to diagnose. In fact, she had seen another doctor earlier who had run blood tests that were completely normal.

I was certain that the child had a case of food poisoning, and I tried to reassure her father. But I was naive to that fact that I wasn’t treating the child’s belly -- I was treating this parent’s anxiety. He couldn’t accept my reassurance and demanded a CT scan. When I told him I didn’t think that was right, he began to pressure me. "What would you do if she were your kid?" he asked.

It’s the kind of unpleasant encounter that makes me tense. I felt sympathetic to him, but I held my ground. He eventually relented. But he warned me that if she kept vomiting, he was going to take her to the emergency room for that scan.

I thought about that child and her father all day, even after I went home that night. What if I had been wrong, and I sent that child home with a ruptured appendix, a cancer growing in the walls of her intestine? Should I have ordered that test?

No doubt, doctors have lived with this uncertainty forever. But I practice in the 21st century, a time when patients (or their parents) dislike any ambiguity whatsoever. It's also a time when shows like "House and "ER" and "Grey's Anatomy" have given even casual viewers a working vocabulary for specialized medical equipment. Patients may not have a sophisticated sense of what a CT scan does, but they know that it's important and advanced, that it has a certain prestige and could give them the best, most unambiguous diagnosis possible.

The next morning, I walked into the office anxious, checking to see if that child had ended up in the emergency room. She hadn’t. But ordering that CT scan would have been my security blanket -- not to mention a parent pleaser. And in the psyche of doctors who perceive that being wrong equals being sued, we can easily buy ourselves peace of mind by putting pen to paper and writing the order.

Still, even putting aside radiation, there are other reasons why a boost CT scans can be problematic. Ironically, a test like a CT, so good at illuminating subtle details, can lead to further insecurity, work and anxiety for both patient and doctor. Take the following scenario, another one I’ve faced in my career, as I’m sure most doctors have. A teenage patient fell down playing soccer and hit his head. He was taken to the local ER and had a head CT. While there was no evidence of any injury from his fall, he was found to have a cyst in another part of his brain.

Enter the "incidentaloma," which is medical slang for a serendipitous finding on an imaging test. Incidentalomas are a costly side effect of better technology like CT scanners, and do nothing more than put doctors and patients in a pickle. Once discovered, we’re obligated to do more. In the case of this patient, it meant a referral to a neurologist and an MRI, a test that, though it doesn't involve radiation, is even more expensive than a CT. In the meantime, the child missed additional days of school, and the child's parent missed work. The final verdict? The cyst was a normal variant of the child’s brain anatomy.

Getting back to the issue of CT scan and radiation, though, most experts agree that overuse needs to be curbed. If it isn't, we could face a future public health problem of rising cancer rates, thanks to our medical overzealousness. It’s akin to our realization that excessive antibiotic prescribing created resistant strands of bacteria. Scientists spent the next 20 years educating doctors and the public about those risks. The message seems to have taken: It’s rare that I get a parent in my practice who demands antibiotics. Many, in fact, now question whether their child needs them at all.

We've fallen off a similar cliff with CT scans. In a 2004 survey 75 percent of radiologists and ER doctors grossly underestimated the radiation dose from a CT scan. Over half the radiologists surveyed and over 90 percent of emergency-room physicians did not believe that CT scans increased the lifetime risk of cancer.

So what do we do? Educating doctors and patients about the risk of CTs is already underway in many places, as is making sure radiologists know how to fine-tune doses of radiation for kids who get CTs so that they’re subjected to less radiation.

An even better way to curb all this testing would be to keep patients out of the ER unless they really need it. ER doctors are amazing at what they do, but it’s not fair to ask them to try to build a trusting relationship with a patient they’ll probably only see once in their career. That’s best left to someone like me, the primary care doctor. Over time, getting to know a patient or their parent builds comfort and trust. So, when a parent asks me whether or not a child needs a CT scan or any other test, I can give them my honest opinion, and they’ll believe me. That’s also why, despite my story about the child with the belly pain, I generally find myself ordering more tests (CT scans and otherwise) and making more referrals for patients I don’t know as well -- much like emergency room doctors. Trust, not technology, really is everything in medicine. It’s the real "power of good," as the fictional Dr. Cooper puts it, not because it allows not to less or more for our patients, but because it allows us to do the right thing as much as we humanly can.