A warning of doom from Wall Street to Washington

S&P changes the U.S. credit outlook to "negative." But there's an easy fix: Tax the rich 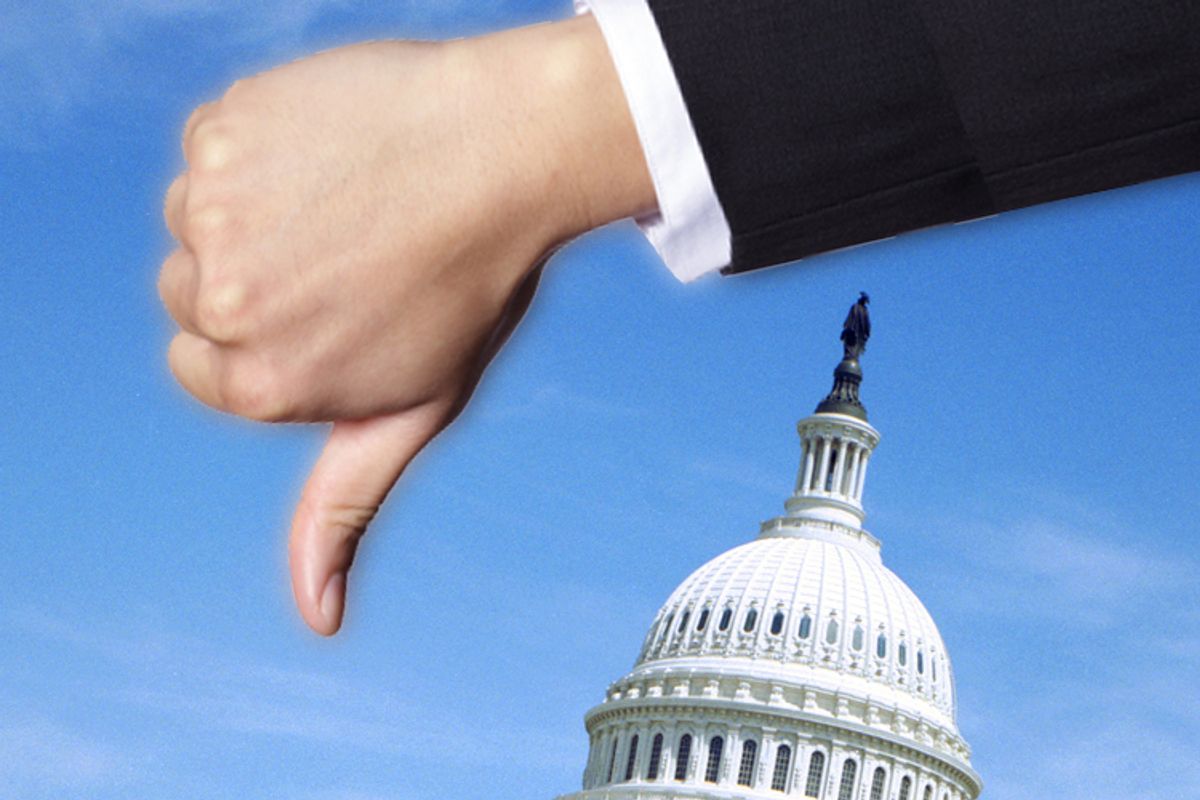 There is no little irony to all the attention being showered on Standard & Poor's announcement Monday that it is changing the outlook for the U.S. AAA credit rating from "stable" to "negative." Along with the other major ratings agencies, S&P was notoriously awful at judging the credit-worthiness of the complex financial instruments that blew up during the financial crisis. As Barry Ritholtz writes at The Big Picture, "Of course there is a negative future outlook. It's in large part the work product of S&P and Moody's."

S&P's announcement does not mean that the credit-rating for the U.S. has been downgraded -- it just signals that the chances for a downgrade in the next few years are rising. Reactions to this news have been all over the map. Some shrugged it off, some cheered, some warned in somber tones of dire future portents. The Dow Jones Industrial Average immediately dropped 200 points, but yields on Treasury bonds fell -- which layers on even more irony: Upgraded fears as to U.S. credit-worthiness sent investors immediately to the safest possible haven -- U.S. credit!

That said, there is no particular reason to doubt the thrust of S&P's critique.

"We believe there is a material risk that U.S. policy makers might not reach an agreement on how to address medium-and long-term budgetary challenges by 2013," New York-based S&P said today in a report. "If an agreement is not reached and meaningful implementation does not begin by then, this would in our view render the U.S. fiscal profile meaningfully weaker than that of peer 'AAA' sovereigns."

Ezra Klein gets right to the heart of the matter: The problem is political, not economic.

What's important to understand here is that the rating agency isn't saying that America's debt has grown beyond what our economy can absorb. They're saying that Democrats and Republicans don't agree on what to do about it, that the gap is widening rather than narrowing, and that that polarization, when added to the political system's increasing dysfunction, could conceivably delay or prevent a deal. Our deficit problems are not, in other words, problems of economics so much as problems of politics.

Let's suppose that the S&P announcement works as a proxy for Wall Street dismay at Washington's political gridlock. If that's the case, then Wall Street needs to do its own part in solving the problem. One of the crucial -- perhaps the most crucial -- roadblocks to any agreement between Republicans and Democrats is the unwillingness of Republicans to consider any possible revenue increases as part of a "grand bargain" that would combine spending cuts and tax hikes into one package. Instead, the Republican solution to our deficit woes is a draconian reduction in government spending that would have terribly negative consequences for the American safety net and would also likely be rejected at the ballot box should it ever be enacted. It's simply not feasible. So if Wall Street really wants to fix Washington, then its lobbyists should be urging for an end to the Bush tax cuts for the wealthy and to corporate tax reform than resulted in increased revenue for the government. In other words, Wall Street needs to share the pain.

It's in their own interest. A real downgrade in the U.S. credit rating would hurt Wall Street as much as, or more than, anyone -- it would no doubt gouge out a bigger pound of flesh from its bottom line than a return to Clinton-era tax rates. It's time for Wall Street to do the right thing -- Standard & Poor's demands it!