What explains the color of money?

Put down those tax forms -- and take a closer look at some currency, past and present, from around the world 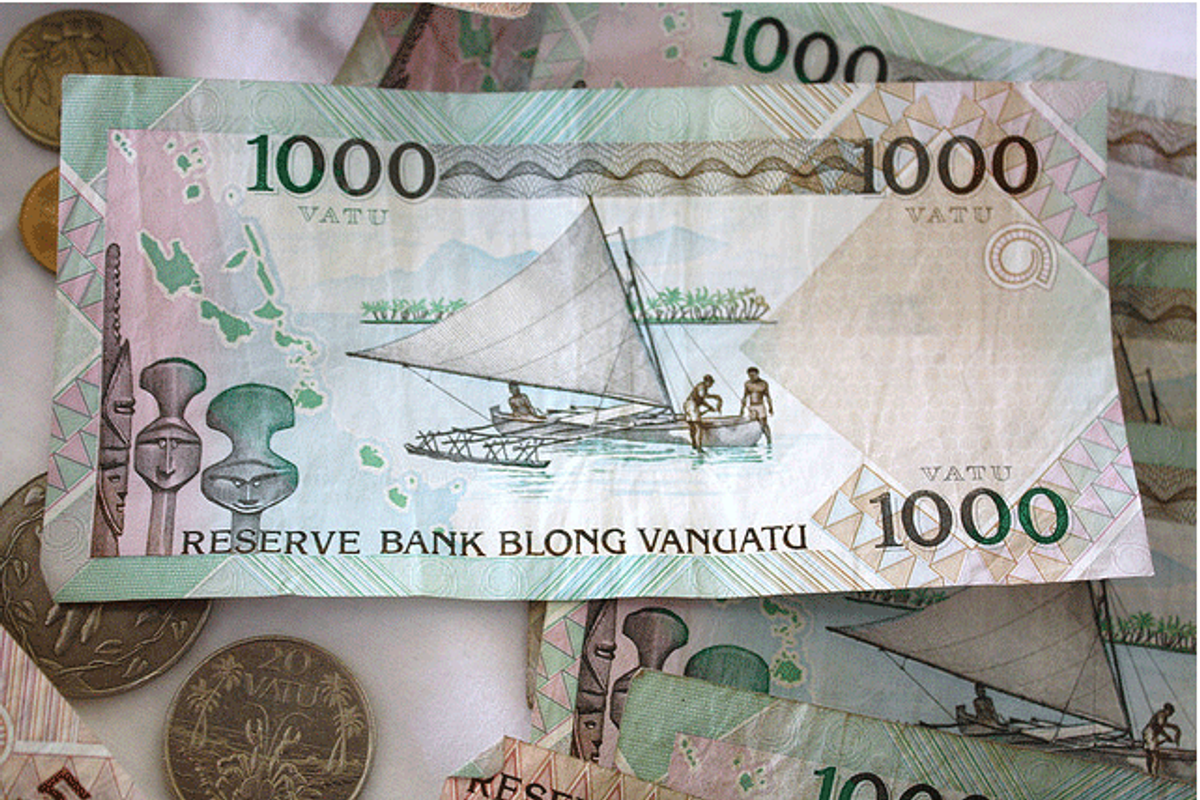 Greetings, taxpayers! Here's a fine excuse to look up from your pained calculator-stabbing and blood-smeared Form 1040s and horse around a little. After all, you have until today to file with the IRS, so why not join us for a whirlwind tour of the various colors of money?

Let's start with the U.S. greenback, that mono-greened currency that has recently -- and to many, alarmingly -- taken on a blush of peach with garish, outsize purple numbers. The U.S. dollar takes its signature green from a so-called Demand Note from the Civil Era, which launched paper currency as a concept nationwide (a false start with so-called Continental Dollars in the revolutionary era notwithstanding). Rather than lug your gold bars from battlefield to battlefield, a Demand Note represented an amount you'd stockpiled in gold elsewhere, a handy virtualized bit of paper that you could, upon demand, exchange for its equivalent value in gold. Later replaced by legal tender backed by gold, which was itself later backed by GDP, the virtual qualities of money have steepened over the years -- a trend goldbugs and states like Utah would love to reverse.

What's really steeped in mystery is where the dollar's green color originated from. The Bureau of Engraving and Printing offers this explanation, although I smell anachronism in their conviction that green is "clearly" a stable color suitable for the young country's currency. And thusly was so-called patent green born. Color-fans, rest assured: I will get to the bottom of this. Colors on other currencies are similarly enigmatic. While most nations seek to brand themselves as bold, steadfast and true, color-play on the world's currencies is generally too varied to make many assumptions about what those choices mean. Color's purpose on money conveys more elliptical values: to differentiate different denominations, to foil counterfeiters, and to wear beautifully with much use.

Currencies are transporting by definition. As icons of the faraway, they wear the nimbus of purchasing power that may be far distant from whatever fiefdom on the planet where that currency holds sway. In that sense, money and its faint colors may be the perfect example of how Walter Benjamin defined "aura": an object's power to suggest "the unique phenomenon of distance, however close it may be."

Money and its colors also connote everyday life, the hand-to-hand exchange that makes up so many workaday transactions. What is it about money from forbidden lands -- places it's tricky or impossible to visit -- that holds the attention so fixedly?

Currency has its own glow, but that glow also attracts defacement, when the issuing government pictures despots or represents an unendurable status quo. Defiling paper currency is a devilish pleasure, a message in a bottle that one hopes will circulate anonymously back to the powers-that-be: "We spend your money because we must, but in the marketplace of public opinion, you and your minions are faltering."

I love imaginary currencies as much as I love fictional languages. I recall with fondness an invented language my friend Nicole and I created as preteens: Heavy on invective for boys and their faults, its vocabulary was telling.

Wired commissioned this imaginary currency for a 2008 article on Internet Gaming Entertainment, a company that facilitates players who want to exchange real money for in-game goods and currency. It's the handiwork of designer Martin Woodtli, who tied for second prize in a recent competition to redesign the Swiss franc. The actual Swiss franc, not quite as visionary as Woodtli's but still quietly breathtaking, is pictured below.

Imaginary money isn't always delightful, of course -- at least, in its implications. While I'm mad for the strong colors and bold graphics of German Notgeld (emergency money) issued during the spiraling inflation after World War I, filling a wheelbarrow with it to buy bread is a sobering thought. "Hardships will vanish," says Braunschweig's 20-mark bill, a state-issued currency used locally post-WWI, "but disgrace will endure."

The question lingers: Whose disgrace? Presumably, anyone who cheated a neighbor out of the value tendered by this coupon. Could anyone have anticipated the national disgraces just over the horizon? How beautiful when money has the force to buy things, and how worthless as pretty paper when it does not.

Ah, tax day brings you troubled thoughts sometimes. On a sunnier note, color-fans, please accept this lemon-limey gazillion dollar bill, illustrated by Taylor Jones, as legal tender for my best regards in fiscal 2011. May your tax bill be teensy and your refunds thunderous and large!