"The Wilder Life": A "Little House on the Prairie" road trip 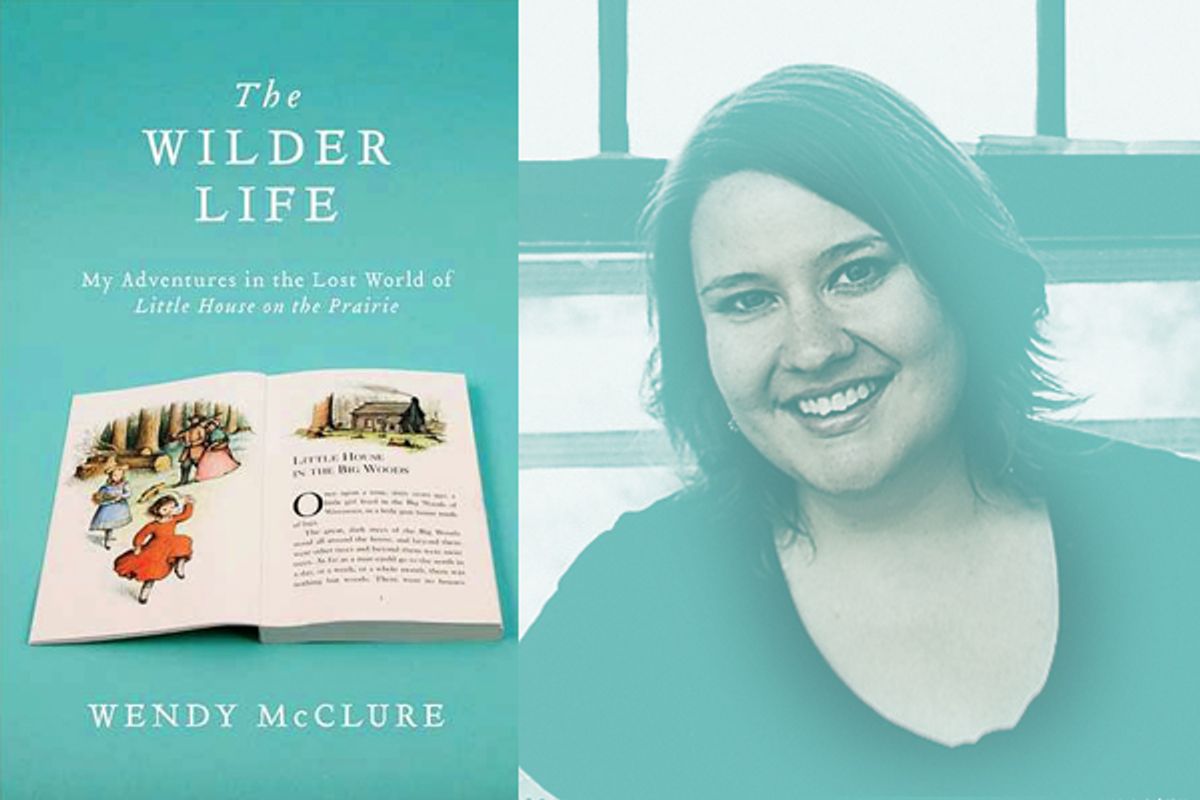 The first thing I should say about Wendy McClure's "The Wilder Life: My Adventures in the Lost World of 'Little House on the Prairie'" is that it has the power to charm even those who shudder at the thought of gingham, calving or salt pork. As a child reader, my tastes ran more toward Anglophilia and stories without parents, and still I devoured this memoir like Laura "Half-Pint" Ingalls chowing down on Ma's vanity cakes. On the other hand, anyone who fell under the spell of Wilder's depiction of 19th-century frontier life should proceed with extreme caution and administer "The Wilder Life" in controlled amounts. Otherwise, you may find yourself booking a trip to Independence, Kan., or De Smet, S.D., in helpless emulation of McClure's vow to "let my calico-sunbonnet freak flag fly."

Wilder's autobiographical novels were McClure's girlhood favorites, her entree into a secret haven she thought of as "Laura World." "I wanted to live in one room with my whole family and have a pathetic corncob doll all my own," she writes. In the aftermath of her mother's death from cancer in 2007, McClure, a children's book editor in Chicago, returned to Wilder's books for comfort. In no time she was baking Long Winter Bread (a sort of hand-ground, sprouted sourdough loaf made by Ma during a particularly hard season in South Dakota) and bidding on butter churns on eBay.

When her boyfriend gave her copy of a travel guide for Wilder buffs, McClure added an itinerary of pilgrimages throughout the Midwest to her holiday plans. None of the Ingalls family's several houses remains standing, but there are reconstructions of the little house in the big woods, the sod house from "On the Banks of Plum Creek" and, of course, the little house on the prairie. The site for the latter was once lost -- Wilder and her daughter, Rose, went on a road trip in the 1930s, around the time the books were written, looking for it, but to no avail. Eventually, obsessive Wilder fans deduced the location via careful scrutiny of census and land claim records from the 1870s. They found a hand-dug well on the very spot.

Did Pa dig that well? Maybe. The true story behind the Little House books is, of course, more complicated and elusive than its fictional counterpart. McClure learns that while the series relates the saga of an independent pioneer family journeying ever westward in search of freedom and opportunity, the Ingalls clan followed a more meandering course. For a period (never described in Laura's published works) they even co-owned a hotel in Iowa, where the children worked as servants.

Perhaps most unsettling for McClure, she also learned that the most famous novel in the series, "The Little House on the Prairie," is also the most fictional; Laura Ingalls was less than 3 years old when her family moved to the prairie, too young for most of the adventures described in the book. Furthermore, her father almost certainly knew that he was squatting illegally on land owned by the Osage Indians. Add to this such revelations as the discovery that the site of the little house in the big woods no longer sports much in the way of woods (and possibly never did), and McClure found herself wrestling with a certain amount of disillusionment.

Fortunately, she expected as much, and "The Wilder Life" features as much humor as it does reminiscence and reportage. With her wisecracking, but winningly game boyfriend, Chris, in tow, McClure embarks on all of her attempts to enter Laura World in the full knowledge that they are somewhat ridiculous and probably doomed. The result is at once endearing and very funny.

In one of the couple's most bizarre adventures, they visit a farm McClure has fallen in love with online. (Just about the only irony the author doesn't remark on is the fact that most of the information she gathers about the "simple life" of Laura World comes from the Internet.) The people who run the place use a horse-drawn plow, make their own soap and give blacksmithing demonstrations. At the farm's annual "Homesteading Weekend," they soon realize to their horror that everyone around them (including, it seems, the owners) is some kind of religious survivalist preparing for the end times.

Most of the people McClure meets on her travels, however, are other "Little House" devotees. She and Chris come across countless girls in prairie dresses and sunbonnets, stay in a fiberglass "covered wagon" overnight and wade in Plum Creek. Occasionally, there's a transcendent moment. Even a casual Ingalls admirer like myself can understand why one of McClure's friends felt her knees buckle with awe in a Missouri museum when she saw Pa's actual fiddle on display. "The Wilder Life" explores not only the uneasy interplay of fact and fiction but also those disorienting moments when the icons of childhood -- places, people and things of nearly divine power -- suddenly materialize in our adult lives. McClure's touch is as light as Ma's best biscuits, but the result still sticks to your ribs.

Books Children Memoirs Our Picks What To Read