The dark side of my father's literary genius

With "Sophie's Choice," he became a legend -- but his temper and depression haunted my family 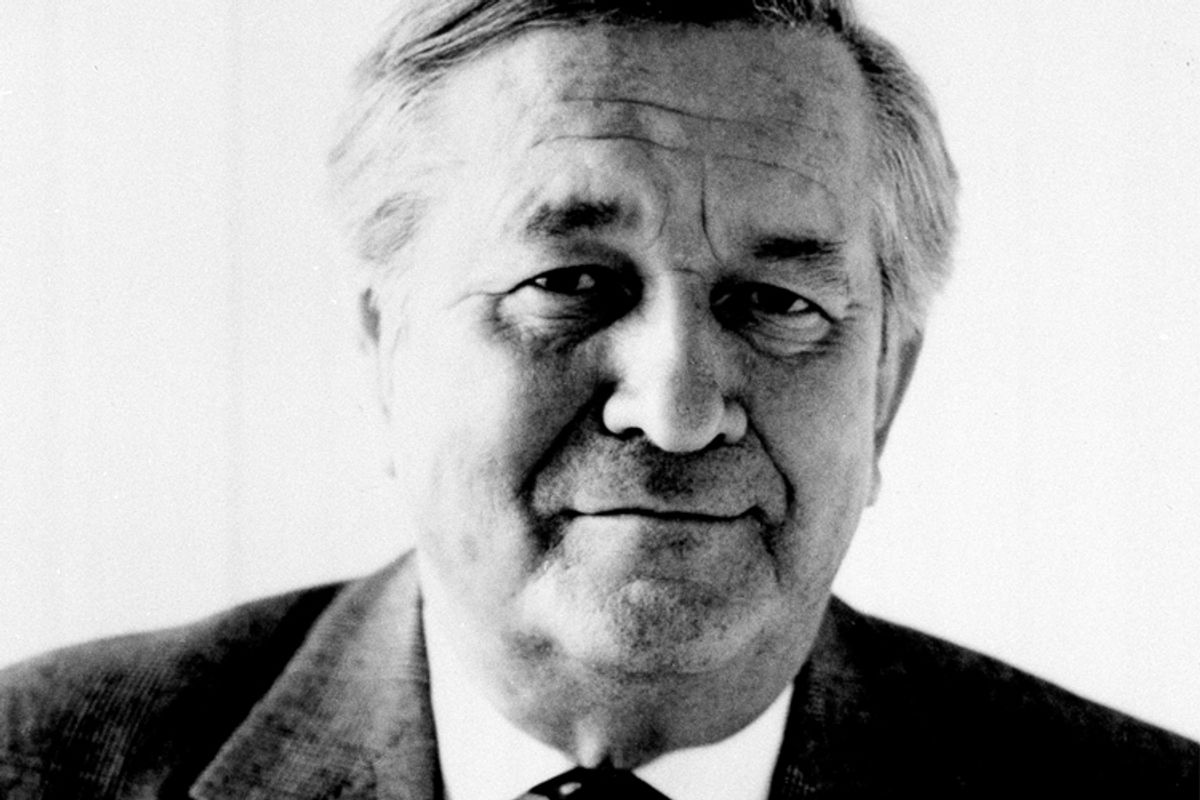 We buried my father on a remarkably mild morning in November 2006. From our family’s house on Martha’s Vineyard to the small graveyard is less than a quarter mile, so we walked along the road, where, it being off-season, not a single car disturbed our quiet formation. Beneath the shade of a tall pin oak, we gathered around the grave site. Joining us were a dozen or so of my parents' closest friends. The ceremony had been planned the way we thought he’d have liked it — short on pomp, and shorter still on religion. A couple of people spoke; my father’s friend Peter Matthiessen, a Zen priest, performed a simple blessing; and, as a family, we read the Emily Dickinson poem that my father had quoted at the end of his novel "Sophie’s Choice."

Ample make this bed.
Make this bed with awe;
In it wait till judgment break
Excellent and fair.

Be its mattress straight,
Be its pillow round;
Let no sunrise’ yellow noise
Interrupt this ground.

My father had been a Marine, so the local VA offered us a full military funeral. Mindful of his sensibilities, we declined the chaplain. We also nixed the three-volley salute. But we were sure Daddy would have been pleased by the six local honor guards who folded the flag for my mother, and the lone bugler who played taps before we dispersed. Of military service, my father once wrote, "It was an experience I would not care to miss, if only because of the way it tested my endurance and my capacity for sheer misery, physical and of the spirit." The bugler, then, had honored another of my father’s quirks: his penchant for a good metaphor.

A year and a half later, I was walking across the West Campus Quad of Duke University, my father’s alma mater. Passing beneath the chapel’s Gothic spire, I opened the heavy doors of Perkins Library and headed for the Rare Book, Manuscript, and Special Collections Library. It is there that the William Styron Papers, 22,500 items pertaining to his life and work, are housed. I was at the end of my third trip to North Carolina in as many months. Before I flew home to New York that afternoon, there were two big boxes I still hoped to get a look through.

In 1952, when he was twenty-six, my father published his first novel, "Lie Down in Darkness." The book was an immediate success, and he was soon hailed as one of the great literary voices of his generation. Descendants of the so-called Lost Generation, my father and his crowd, including Norman Mailer, James Jones, and Irwin Shaw, embraced their roles as Big Male Writers. For years they perpetuated, without apology, the cliché of the gifted, hard drinking, bellicose writer that gave so much of twentieth-century literature a muscular, glamorous aura. In 1967, after the disappointing reception of his second novel, "Set This House on Fire," my father published "The Confessions of Nat Turner." It became a number one bestseller, helped fuel the tense national debate over race, and provoked another one regarding the boundaries of artistic license. "Sophie’s Choice," published in 1979, won him critical and popular success around the world. Three years later, with the release of the film adaptation starring Meryl Streep and Kevin Kline, that story also brought him an extraliterary measure of fame. Winner of the Prix de Rome, American Book Award, Pulitzer Prize, the Howells Medal from the American Academy of Arts and Letters, and France's Légion d’Honneur, my father was considered one of the finest novelists of his time. He was also praised, perhaps by an even larger readership, for "Darkness Visible," his frank account of battling, in 1985, with major clinical depression. A tale of descent and recovery, the book brought tremendous hope to fellow sufferers and their families. His eloquent prose dissuaded legions of would be suicides and gave him an unlikely second act as the public face of unipolar depression.

As it turned out, the illness wasn’t finished with my father. I think we all recognized, in the aftermath of his cataclysmic breakdown, that Bill Styron had always been depressed. A serious drinker, he relied on alcohol not only to self-medicate but to charm the considerable powers of his creative muse. When, at sixty, liquor began to disagree with him, he was surprised to find himself thoroughly unmanned. For many years after his ’85 episode, he maintained a fragile equilibrium. But the scars were deep, and left him profoundly changed. He was stalked by feelings of guilt and shame. Several setbacks, mini major depressions, humbled him further and wore a still deeper cavity in the underpinnings of his confidence. It seems that my father’s Get out of Jail Free card had been unceremoniously revoked. And though he went about his business, he’d become a man both hunted and haunted.

One day when I was still a baby, not yet old enough to walk, my mother went out, leaving me in the care of my seven-year-old brother, Tommy, and nine-year-old sister, Polly. Before she left, my mother placed me in my walker. For a while, Polly, Tommy, and the two friends they had over played on the ground floor of our house while I gummed my hands and tooled around the kitchen island. Then, one by one, the older kids drifted outside. Maybe a half hour later, they found themselves together at Carl Carlson’s farm stand at the bottom of our hill. On the makeshift counter of his small shed, Carl sold penny candy; no one could resist a visit on the couple of days a week he was open. It took a little while, scrabbling over bubble gum and fireballs, before, with a sickening feeling, my siblings realized that nobody was watching the Baby. Racing back up the hill, Polly burst into the kitchen but couldn’t find me. After a minute or so, she heard a small moaning sound and followed it to the basement door. I was still strapped in my walker, but upside down on the concrete floor at the bottom of the rickety wood stairs. My forehead had swelled into a grotesque mound. My eyes were glassy and still. Cradling me, Polly and Tommy passed another stricken, terrified hour before my mother got home and rushed me to the hospital.

I’ve known this famous family story for as long as I can remember. But I was in my thirties before Polly confessed a detail I’d never known: our father was upstairs napping the whole time. Afraid for her own life as much as for mine, she couldn’t bring herself to wake him.

Until 1985, my father’s tempestuous spirit ruled our family’s private life as surely as his eminence defined the more public one. At times querulous and taciturn, cutting and remote, melancholy when he was sober and rageful when in his cups, he inspired fear and loathing in us a good deal more often than it feels comfortable to admit. But the same malaise that so decimated my father’s equanimity when he was depressed also quelled his inner storm when he recovered. In my adult years, he became remarkably mellow. A lion in winter, he drank less and relaxed more. He showed some patience, was mild, and expressed flashes of great tenderness for his children, his growing tribe of grandchildren, and, most especially, his wife.

He also managed, for the first time, to access some of his childhood’s unexamined but corrosive sorrows. In 1987 my father wrote "A Tidewater Morning," a short story in which he delivered a poignant chronicle of his mother’s death from cancer when he was thirteen. The story would become the title of a collection of short fiction, published in 1993, that centered on the most significant themes of his youth. During these years he also wrote several essays for The New Yorker, Esquire, The New York Times, Newsweek, and other magazines. He published a clutch of editorials; wrote thirty some odd speeches, commencement addresses, eulogies, and tributes; and traveled frequently to speak on the subject of mental illness.

As for long fiction, it was less clear what he was doing. (If there was a golden rule in our house when I was growing up, it was, unequivocally, "Don’t ask Daddy about his work.") First and foremost, my father was a novelist. "A high priest at the altar of fiction," as Carlos Fuentes describes him, he consecrated himself to the Novel. He wrote in order to explore the sorts of grand and sometimes existential themes whose complexity and scope are best served by long fiction. With a kind of sacred devotion, he kept at it, maintaining his belief in the narrative powers of a great story — and he suffered accordingly in the process. His prose, laid down in an elegant hand on yellow legal pads with Venus Velvet No. 2 pencils, came at a trickle. He labored over every word, editing as he went, to produce manuscripts that, when he placed the final period, needed very little in the way of revision. But, even at the height of his powers, this meant sometimes a decade or more between major works. Like that of a marathoner running in the dark, my father’s path was sometimes as murky as it was long.

Alexandra Styron is the author of the novel "All the Finest Girls." Her work has appeared in the New Yorker, the New York Times and Real Simple, among other publications. She lives with her husband and two children in Brooklyn, N.Y.