Compared to two years ago, the U.S. economy is much healthier -- unless you happen to be filling up your tank 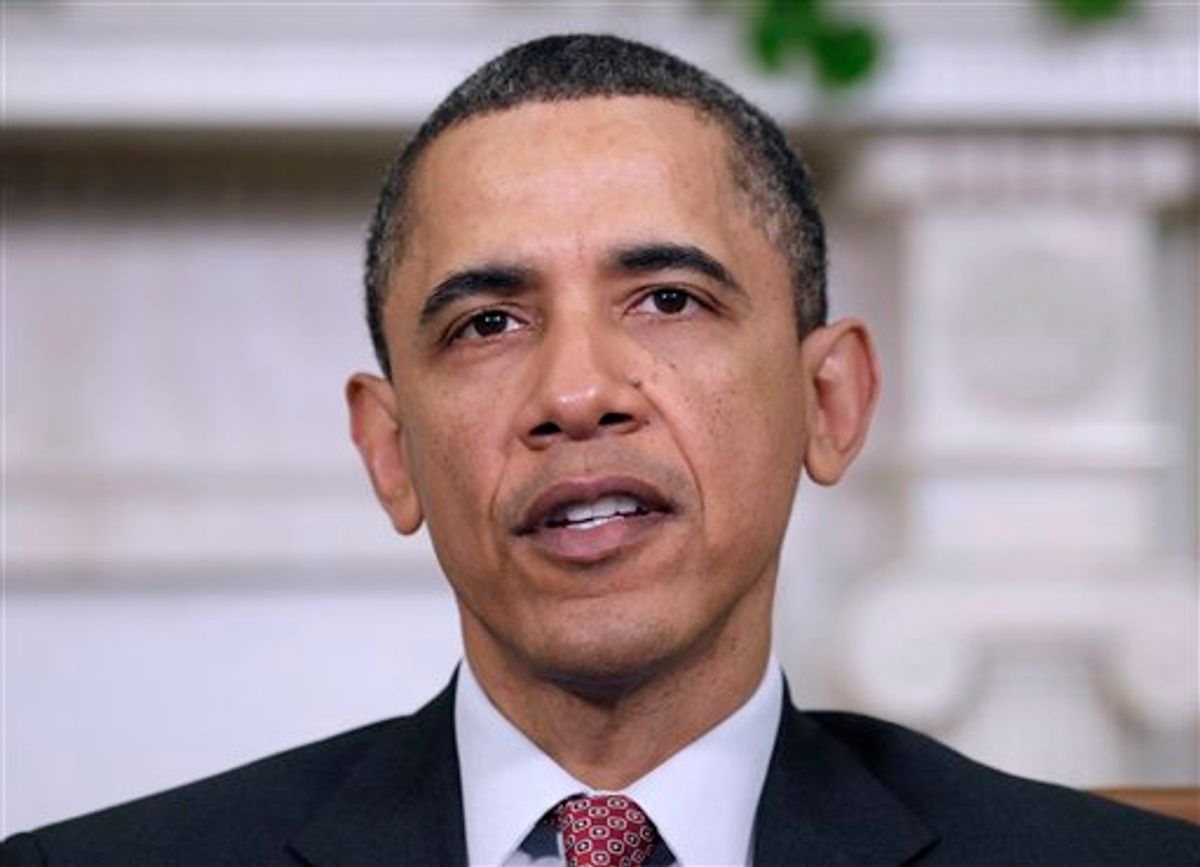 FILE - In this April 14, 2011 file photo, President Barack Obama speaks to media in the Oval Office of the White House in Washington. Campaigning to raise taxes on the wealthiest Americans, President Barack Obama joins the last-minute throng to file returns. A year ago, the president and his wife earned $5.5 million, mostly from book sales, paying about one-third of it in federal taxes while employing the Bush-era tax cuts Obama is trying to end. (AP Photo/Carolyn Kaster, File) (AP)
--

President Obama's approval rating is sinking again and the primary reason why appears to be perceptions of the U.S. economy. 44 percent of Americans, according to a new Washington Post-ABC News poll, think the country is headed in the wrong direction. That's the highest percentage since March 2009, when the Great Recession was near its absolute nadir.

That presents a bit of a puzzler. By pretty much any standard, the U.S. economy is much improved since then. The labor market is substantially healthier -- instead of shedding hundreds of thousands a job every month, the U.S. economy has been consistently adding jobs for the last six months, and the unemployment rate has fallen by a full percentage point since November. The latest report on new job openings was especially encouraging. The manufacturing sector has been chugging along, and the most recent retail sales numbers demonstrated decent month-on-month and year-on-year growth.

Overall, however, it looks like GDP growth lost steam in the first quarter of 2011, and may come in at under 2 percent, which is not only sluggish, but definitely headed in the wrong direction (though there are some indications that economic activity started to pick up again in March and so far in April.) The housing sector is moribund and the most recent trade data indicated that both U.S. exports and imports had fallen. If you are looking for reasons to be gloomy, you can find them, but not if you compare where we are now with where we were two years ago.

Unless you consider gas prices. Gas prices are definitely up, as are a large swath of commodity prices that are pushing grocery costs up. Even though economists tend to discount changes in gas and food prices when measuring inflation because they are deemed too volatile, consumers definitely notice the pain. Our wages aren't going up, but the cost of filling up the gas tank has surged. That's never fun.

So it could be as simple as that: Higher gas prices have Americans feeling that the country is going in the wrong direction, and they're taking it out on Obama. If that's the case, the president is in a bit of a pickle, because it's not clear that he can do much about either the price of oil or the price of food.

A debate is currently raging about whether commodity price inflation is a result of the Federal Reserve's easy money policies or has to do with the steady growth in world wide demand combined with disruptions to supply. Janet Yellen, the former president of the San Francisco Fed who was appointed by Obama as vice-chair of the Federal Reserve Board of Governors, falls into the latter camp.

In my view, the run-up in the prices of crude oil, food, and other commodities we've seen over the past year can best be explained by the fundamentals of global supply and demand rather than by the stance of U.S. monetary policy.

In particular, a rapid pace of expansion of the emerging market economies (EMEs), which played a major role in driving up commodity prices from 2002 to 2008, appears to be the key factor driving the more recent run-up as well. Although real activity in the EMEs slowed appreciably immediately following the financial crisis, those economies resumed expanding briskly by the middle of 2009 after global financial conditions began improving, with China -- which has accounted for roughly half of global growth in oil consumption over the past decade--again leading the way. By contrast, demand for commodities by the United States and other developed economies has grown very slowly; for example, in 2010 overall U.S. consumption of crude oil was lower in than in 1999 even though U.S. real gross domestic output (GDP) has risen more than 20 percent since then. On the supply side, heightened concerns about oil production in the Middle East and North Africa have recently put significant upward pressure on oil prices, while droughts in China and Russia and other weather-related supply disruptions have contributed to the jump in global food prices.

The bad news is that the White House has extremely limited ability to affect these trends. The good news is that Yellen -- who had a much better record anticipating serious economic problems in the runup to the financial crisis than did Ben Bernanke -- doesn't think that the current level of commodity price inflation will throw the economic recovery completely off the tracks. If that's true, then maybe the White House shouldn't get too alarmed by the latest poll numbers. If the economic recovery continues throughout the rest of this year and into 2012, dissatisfaction might not metastasize into outright rejection.