A reminder: Obama could easily lose next year

It's tempting to think the GOP will nominate a loon to run against him, but it's not a good bet for Democrats 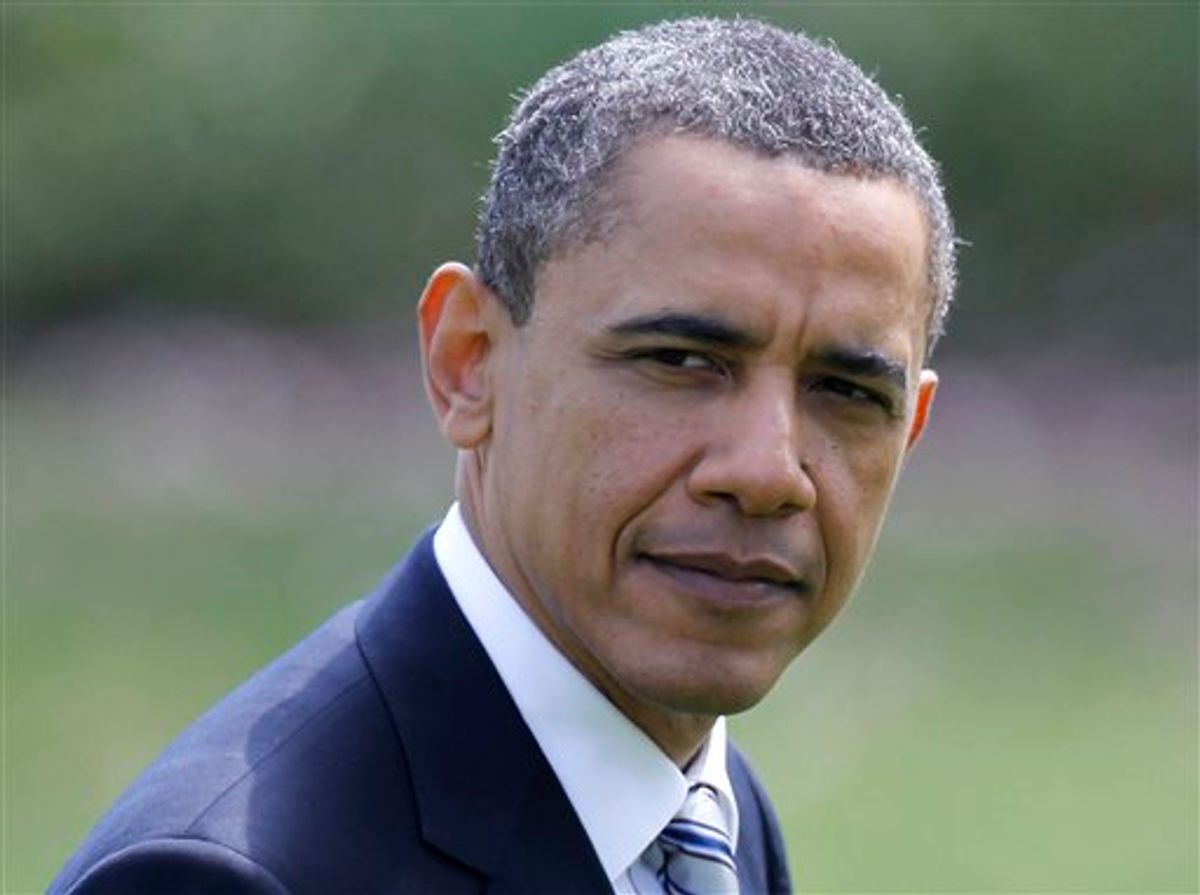 Conventional wisdom has held for several month that President Obama is in reasonably good shape to win reelection in 2012. But a new poll provides a helpful reminder of the degree to which Americans are gripped by economic anxiety -- something that always has a corrosive effect on the standing of an incumbent president.

Granted, there's a risk of reading too much into this. Obama's seeming decline might be partly attributable to the margin of error, and his previous numbers might have been artificially inflated by specific events or the overall tone of news coverage at the time. Plus, it's possible that the GOP's fierce response to his budget speech last week -- in which Obama was blasted for (supposedly) adopting an overly-partisan tone -- has driven down his standing with swing voters. According to the poll, Obama's disapproval number from independents has risen to 55 percent; this may be the result of voters who are conditioned to like the idea of bipartisanship and who, upon being exposed to several days of loud shrieks from the GOP, decided that Obama must be doing something ... unreasonable. (The good news for Obama, if this is the case, is that the polling dip created by this reaction will almost certainly be temporary.)

But even if the "decline" in Obama's numbers is an illusion, the fact is that his approval rating is pretty much exactly where it should be. The unemployment rate has dipped slightly for the past few months, but at 8.8 percent, it remains perilously high as far as Obama's reelection prospects are concerned. Moreover, the painfully sluggish pace of the recovery seems to be sapping Americans of any optimism; in the ABC/WaPo poll, 44 percent say they economy is getting worse -- the highest that number has been since early 2009.

This underscores a basic point that can't be made enough: Under economic conditions like those that now exist, Obama is likely to be defeated in 2012.

I know, I know: The new poll also shows Obama easily defeating just about every possible Republican opponent, and clearing the magic 50 percent mark against all but one of them (Mitt Romney). His lead is 17 points over Sarah Palin (for what that's worth), 15 over Tim Pawlenty and Newt Gingrich, 12 over Donald Trump and Michele Bachmann, six over Mike Huckabee and four over Romney. The unusual weakness of the GOP field, we keep hearing, is Obama's ace-in-the-hole -- his way of surviving November'12 even if the economy remains rotten.

There are two problems with this thinking. One is that it means little for an incumbent president to enjoy early leads over his possible general election opponents, even when the economy is struggling. Well into 1992, even as economic anxiety was soaring and unemployment was approaching 8 percent (a significant jump from the start of his presidency), George H.W. Bush was still seen as a good bet for reelection because of the supposed weakness of that year's Democratic field. Eventually, Democrats settled on Bill Clinton, who finally pulled ahead of Bush in July -- and then never looked back. (Note: Ross Perot had nothing to do with Bush's defeat that November; it was the economy that sunk the president.) Rest assured, if the economy doesn't improve -- or gets worse -- the GOP will be well-positioned to oust Obama in 2012, provided the party doesn't nominate a fringe candidate.

Of course, many Democrats believe -- or hope -- that next year's Republican primary voters will nominate a candidate from far outside the mainstream, just like they did in several key Senate races last year. But that's probably expecting too much -- especially because we now have evidence that the conservative establishment is very focused on not fielding an unelectable candidate next year. This (partly) why so many influential conservative voices have spoken up in an effort to marginalize Donald Trump in the last week. Eric Cantor, Charles Krauthammer, George Will, Stephen Hayes, Rich Lowry and Karl Rove -- to name a few -- have all dismissed or disparaged Trump recently. It is not a coincidence that they began speaking up only when Trump surged to the top of GOP polls and began looking (to some) like he might actually run for president. They understand the short- and long-term threat that Trump and his birtherism pose to their party, and by turning on him, they are sending a clear signal to other influential conservatives and to the conservative masses. It is this exact sort of effort that has helped them marginalize Palin within the party. (Notably, the new poll finds that just five percent of Republicans now volunteer Palin's name as their '12 choice.)

The implications of this are obvious: If a clearly unelectable candidate emerges as a viable threat to win the GOP nomination, conservative voices with real credibility on the right will step in to steer the rank-and-file in another direction. In other words, it still seems likely -- for all of the zaniness in the air -- that the GOP will end up nominating a candidate like Romney or Pawlenty next year, someone generic enough to take advantage of a lousy economy (if the economy remains lousy).

For what it's worth, I discussed the conservative establishment's sudden push to marginalize Trump on MSNBC last night with Cenk Uygur and Slate's Dave Weigel. Here's the video: