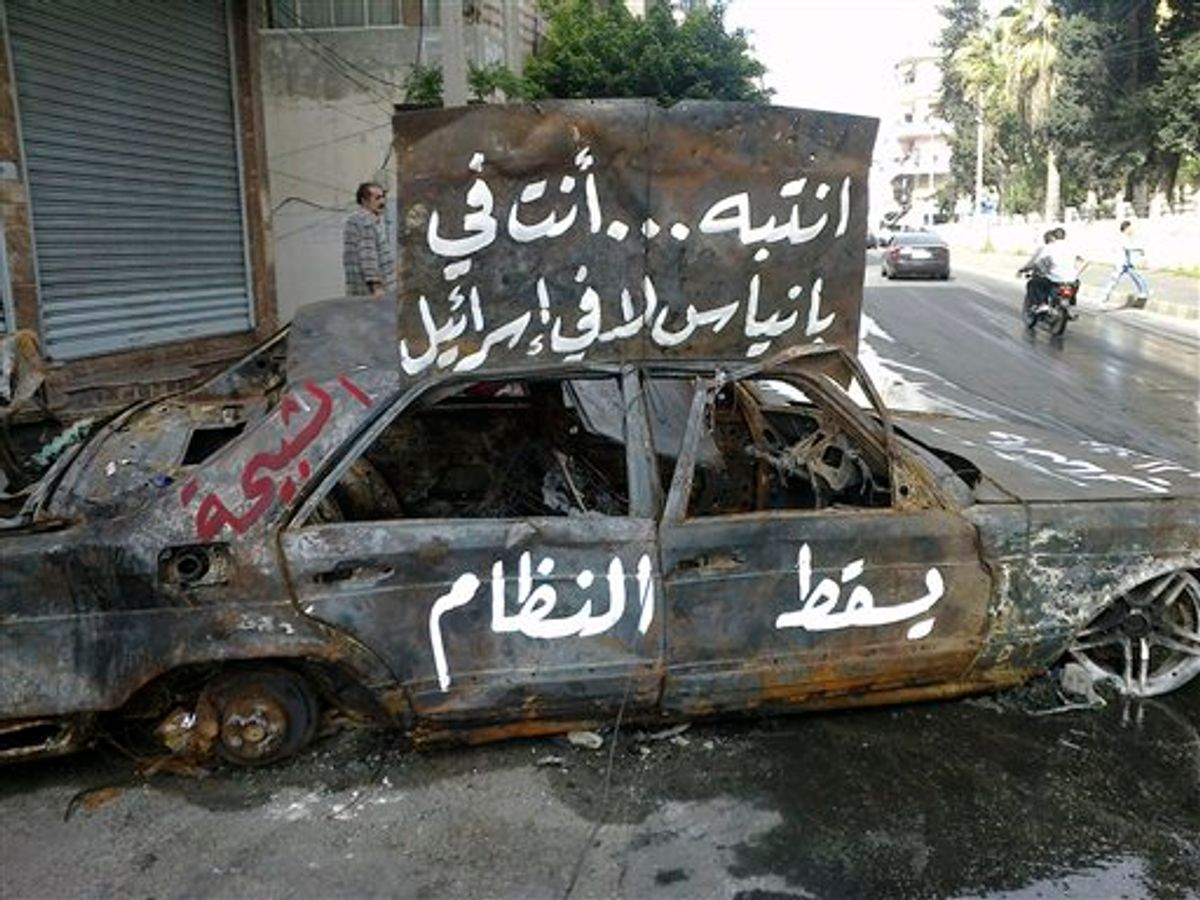 In this citizen journalism image made on a mobile phone and acquired by the AP, and taken Sunday, April 17, 2011, Arabic writing on a burnt car reads:" pay attention, you are in Banias not in Israel. Down with the regime, the "Shabiha" which is a term used in Syria to describe pro-government thugs" in the port city of Banias, Syria. Thousands of people gathered in the central Syrian city of Homs main square Monday following the funeral of six people who were shot dead a day earlier saying they will hold an open-ended sit-in until President Bashar Assad's regime is brought down, witnesses said. (AP Photo) (AP)
--

The Syrian government is warning people not to take part in any protests.

An Interior Ministry statement broadcast on Syrian Television on Tuesday says Syrian laws will be implemented to safeguard the people's security and the country's stability.

It called on Syrians to "assist" authorities by refraining from taking part in any protests.

The statement comes hours after security forces opened fire on hundreds of anti-government protesters staging a sit-in, shooting live ammunition and tear gas before chasing them through the streets for hours.

Witnesses said at least one person was killed and many others wounded.

"They shot at everything, there was smoke everywhere," an activist in the central city of Homs told The Associated Press by telephone, asking that his name not be used because he feared for his personal safety. "I saw people on the ground, some shot in their feet, some in the stomach."

The streets were largely deserted by early afternoon, with people staying inside their homes.

Hundreds of people had gathered Monday at Clock Square in the center of Homs, bringing mattresses, food and water to the site for an Egypt-style standoff. They vowed to stay until President Bashar Assad is ousted -- a brazen escalation of the monthlong uprising against the country's authoritarian regime.

"They went up to people's homes, they arrested many," a Homs resident said by telephone. "We heard ambulances all night."

Three people in Homs confirmed the account, all of them asking for anonymity for fear of government reprisals.

The witnesses' accounts could not be independently confirmed because Syria has placed tight restrictions on media outlets and expelled foreign journalists.

At least 200 people have been killed over the past month as security forces have launched a deadly crackdown on a growing protest movement, human rights groups say. The government has coupled dry promises of reform with brutal tactics to quell the unrest, using the widely despised security forces and unleashing pro-regime thugs known as shabiha.

On Monday, the government blamed the weeks of unrest on ultraconservative Muslims seeking to establish a fundamentalist state -- the latest effort to portray the reform movement as populated by extremists.

Assad has been playing on fears of sectarian warfare as he works to crush any popular support for the uprising.

The Egypt-style standoff in Homs followed funeral processions by more than 10,000 mourners for some of those killed in clashes Sunday that a rights group said left at least 12 people dead.

The protesters, mostly young men but including women and children, had set up tents, bringing in mattresses, food and drinks. One tent was named "national unity tent." Another "martyrs" tent was set up to offer condolences for those killed a day earlier, according to an eyewitness.

The government has in the past blamed "armed gangs" seeking to stir up unrest for many of the killings.