The farce that is Donald Trump

He's praised Obama and said he's pro-choice. Now he's a pro-life birther who pretends to go to church. What a hoax 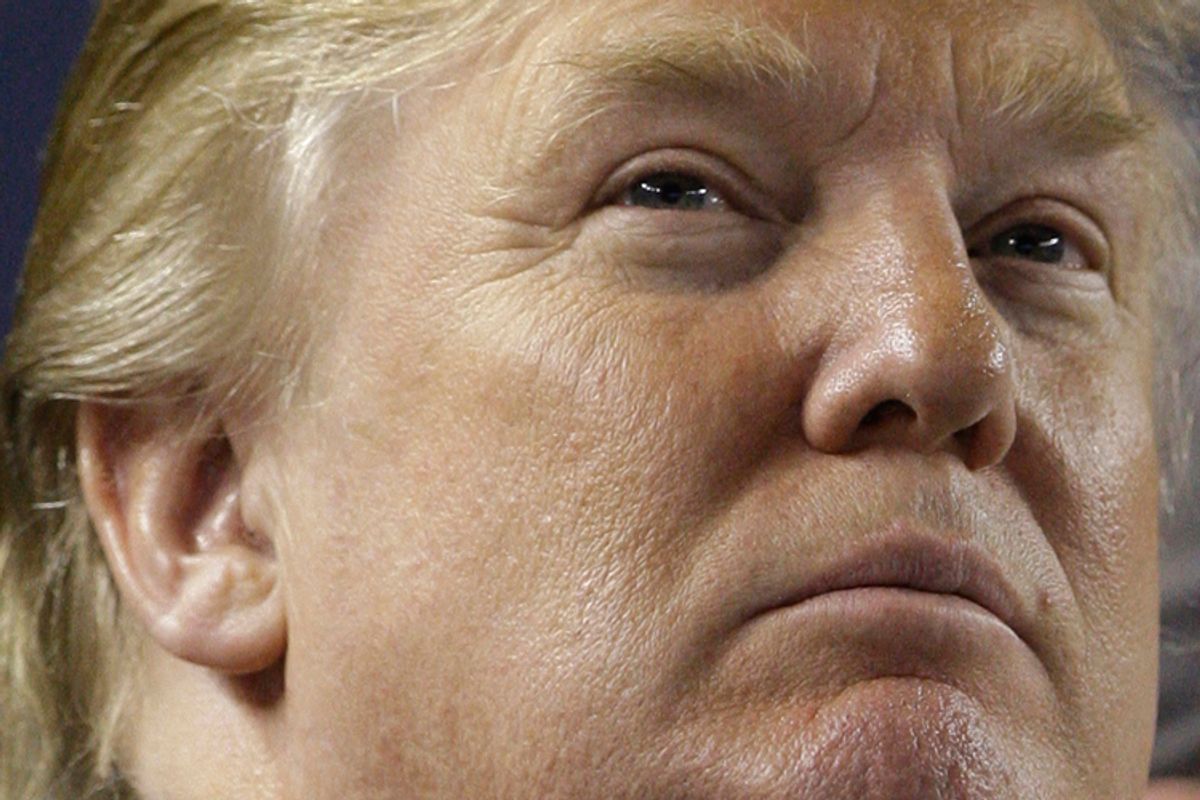 Well, if we're forced to endure a potential presidential run by Donald Trump, at least journalists can try to pay attention to his crazy, contradictory political statements over the last decade or so. That process has belatedly begun. Trump is being challenged over his flip-flops: from pro-choice to antiabortion; from a supporter of higher taxes for the rich to an opponent; from a guy who called for a Canadian-style healthcare system (single payer) to one who trashes "Obamacare" and says we can't afford it. Oh, and most notably, from someone who praised President Obama in his last book, to someone who now, appallingly, foments the lie at the heart of "birtherism," that the president hasn't produced his birth certificate and thus may not be eligible for the presidency.

The birther nonsense alone should keep Trump out of the ranks of people taken seriously, but it hasn't. I just want to examine one flip-flop in particular to show how ridiculous a Donald Trump candidacy would really be.

In 1999 on "Meet the Press," he told host Tim Russert that he was pro-choice:

TRUMP: Well, look, I'm very pro-choice. I hate the concept of abortion. I hate it. I hate everything it stands for. I cringe when I listen to people debating the subject. But you still -- I just believe in choice.

RUSSERT: But you would not ban it?

But today, with NBC's Savannah Guthrie, he said he's "pro-life," and demonstrated a laughable ignorance about the "right to privacy" that was at the heart of the Supreme Court's Roe v. Wade decision:

GUTHRIE: Is there a right to privacy in the Constitution?

TRUMP: Why do you -- why just out of curiosity, why do you ask that question?

GUTHRIE: Well, I'm just -- wondering how that squares with your pro-life views.

GUTHRIE: Well, you know, about the Roe v. Wade decision.

But it gets better: In an interview with Christian Broadcasting Network's David Brody, Trump explained his change of heart on abortion this way:

One of the reasons I changed, one of the primary reasons, a friend of mine, his wife was pregnant, in this case married. She was pregnant and he didn't really want the baby ... He ends up having the baby and the baby is the apple of his eye. It's the greatest thing that's ever happened to him. And you know here's a baby that wasn't going to be let into life. And I heard this, and some other stories, and I am pro-life.

Isn't that awesome -- one of his wealthy male friends has a child he didn't want but grew to love. That's how we make policy in Donald Trump's America -- anecdotally, based on the happy lives of wealthy men. Yup. That's how the Founders envisioned it. Not only does Trump's silly story place men at the heart of the abortion decision, it also makes light of the hardships faced by most women who terminate a pregnancy: Many are already mothers struggling to raise children; many are poor; many have health issues. What a buffoon. (He also told Brody, widely read by evangelical Christians, that he's a churchgoing religious guy: "Well, I go as much as I can. Always on Christmas. Always on Easter. Always when there's a major occasion. And during the Sundays. I'm a Sunday church person. I'll go when I can.")

"During the Sundays." Got it.

Still, the Beltway media is eating it up. Trumpmania is making the recent swoon over the supposedly "serious" Paul Ryan seem sober. Just this morning, I watched a "Morning Joe" panel work itself up over the thrill a Trump candidacy would bring, with Donnie Deutsch admitting "we won't let him go away" and Mark Halperin predicting Trump might ultimately run by popular demand, and Trump depict himself as a "reluctant hero." He's not a hero, he's a craven birther.

Nowhere is the faux-populism that leads media types to praise Trump laid out better than in David Brooks' column today, "Why Trump Soars." Now Brooks wants to be a serious guy, so he states that he would never vote for Trump, and criticizes the birther idiocy. But then he lionizes the wealthy blowhard in terms that undermine his critique:

A child of wealth, he is more at home with the immigrants and the lower-middle-class strivers, who share his straightforward belief in the Gospel of Success, than he is among members of the haute bourgeoisie, who are above it. Like many swashbuckler capitalists, he is essentially anti-elitist.

Trump is no joke. He emerges from deep currents in our culture, and he is tapping into powerful sections of the national fantasy life. I would never vote for him, but I would never want to live in a country without people like him.

Brooks manages to be condescending to actual self-made wealthy people, not to mention "the lower middle class strivers" Trump allegedly befriends. Speaking for myself only: I would love to live in a country without greedy, ignorant, self-promoting blowhards like Donald Trump. I know I'm not alone.

Credit where it's due: Though I'm not a big admirer of the Club for Growth, one of the umpteen lobbying groups for the mega-rich trying to trick middle-class voters into buying their agenda, club president Chris Chocola, former Indiana congressman, is taking the lead in pointing out that Trump is no conservative, and that given his many flip-flops on the issue, he can't be trusted. We discussed the Trump phenomenon on MSNBC's "Hardball" today.