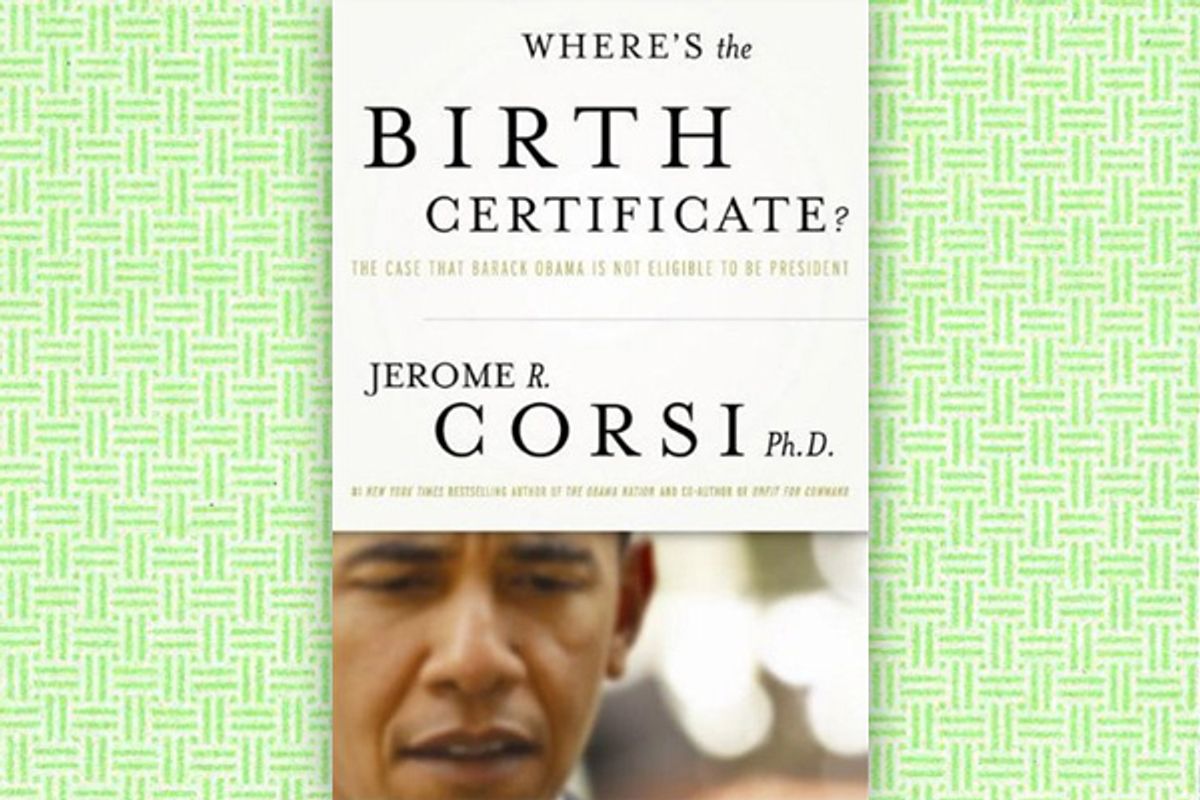 Corsi is best known, still, for his famous "Swift Boat" book, which was full of easily debunked lies about John Kerry, but which was not easily debunked until all the lies had been properly reported and disseminated. Since that book he's gone "full fruitcake," repeating every single right-wing conspiracy theory that comes down the pike, from the NAFTA superhighway to the truly weird "abiotic oil" theory, which says petroleum doesn't come from biological material.

Corsi already wrote his silly Obama book, in time for the 2008 elections, but he forgot to make that book about how Obama was secretly born in Kenya, because that particular conspiracy theory had just been invented at the time. So now he's giving it another go, with "Where's the Birth Certificate."

Drudge's "FLASH" is very, very funny, so I'm just going to reprint it:

After years of research and digging by the nation's top private investigators, here it comes:

"WHERE'S THE BIRTH CERTIFICATE? The Case that Barack Obama is not Eligible to be President."

The street date is a LONG month away, and author Jerome Corsi, the man who torpedoed John Kerry's presidential dreams with SWIFT BOAT, has gone underground and is holding his new findings thisclose.

"It's utterly devastating," reveals a source close to the publisher. "Obama may learn things he didn't even know about himself!"

Does Corsi definitively declare the location of Obama's birth?

Will the president's attorneys attempt to interfere with the book's distribution? [The publisher vows to vigorously fight any legal action that may be taken.]

Will the book finally -- once and for all -- put an end to the growing controversy?

Or will it just ignite new ones!?

"When Donald Trump said he sent PIs to Hawaii to get to the bottom of all this, he meant this book," declares an insider.

Is the "source close to the publisher" the same person as the "insider"? I am going to guess "yes," and I am also going to guess that both of them are Jerome Corsi.

Also, why did Donald Trump send private investigators to Hawaii to look for this book? Couldn't Corsi just send him a galley?