Donald Trump: The president we deserve

He's got Reagan's blarney, Clinton's libido and plenty of experience with massive debt and bankruptcy. Perfect! 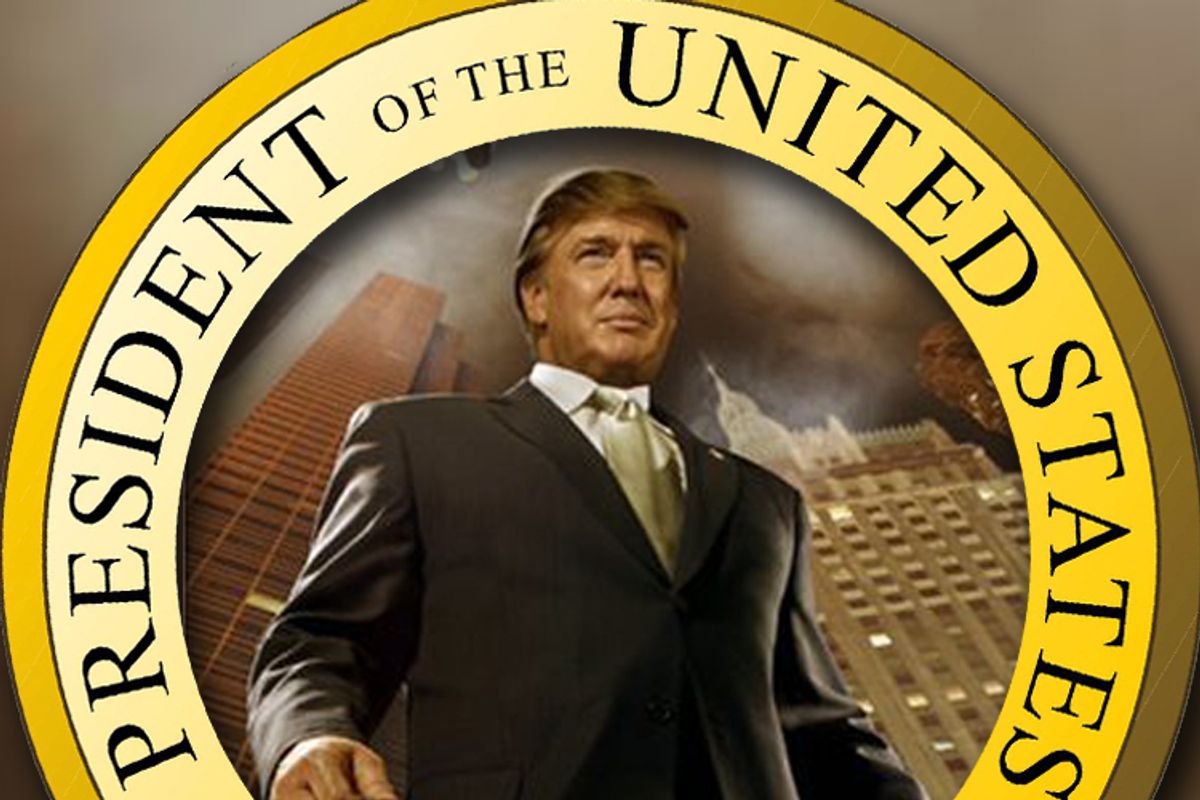 When Timothy O'Brien's "TrumpNation: The Art of Being the Donald" landed on my desk in 2005, I consigned it to the slush pile without thinking twice. Just being alive and conscious from the 1980s to the present day had subjected me to more feckless Trumpitude than any sane man should be expected to endure. I saw no reason to willingly seek out even more.

But six years later, Trump is leading polls of Republican presidential candidates and taking steps to form a campaign organization, and suddenly, I feel the need to be a little bit better informed. Yes, Donald Trump is a cartoon, his 2000 "campaign" proved to be nothing more than a tease, and his current media manipulation is most likely a hoax. But in 2000 the Republican Party had real candidates -- including George W. Bush and John McCain -- bucking for the nomination. The current crop are almost all cartoons. When measured against the likes of Michele Bachmann or Rick Santorum or Sarah Palin, the chances that a crazed loon might get the GOP nomination in 2012 are not just high, they're almost inevitable. A B-movie hack actor once became the leader of the most powerful nation on earth -- who's to say a wildly erratic businessman with strange hair couldn't also?

So it's best to be prepared. I spent Tuesday speed-reading "TrumpNation," in the hope that it would help me imagine what a Donald Trump presidency might be like. The experience has been illuminating. I'm a changed man, and I'm here to tell you, Donald Trump is everything Americans deserve as a president.

I didn't expect to think this. I thought that a review of a business career marked by, to borrow O'Brien's summation, "repeated failures, flirtations with personal bankruptcy, sequential corporate bankruptcies, [and] the squandering of billions of dollars" would provide grist for a thorough denunciation of the Donald. As the political analysts have been quick to point out, Trump's career should be a gold mine for opposition researchers -- and not just because of the multiplicity of political views he has expressed. Let's not forget that in the early 1990s, the Trump brand meant failure. He had fatally overextended himself by wasting billions of dollars of borrowed money on a spending spree that included, among other things, casinos, airlines, ridiculously overpriced hotels, and luxury yachts unloaded by bankrupt Middle Eastern arms sellers.

He dumped his first wife for a younger trophy, and then dumped her for another trophy, shrugging off the tabloid chatter by telling a reporter "You know, it really doesn't matter what they write when you've got a young and beautiful piece of ass." He made a habit of buying property when the price was high, and then being forced to unload it at a huge loss when the real estate market crashed. He has proved comically inept as an Atlantic City casino owner -- really, it's one thing to imagine a gambling mogul in the White House, but an incompetent one? In the course of his career, he's been bailed out by his father, by his siblings, and by the banks to whom he owed hundreds of millions of dollars. By any rational standpoint, his disasters are far more spectacular than his successes. He's a reality-television star, for crying out loud!

But this is not a rational country, and we sure do love our reality TV. And the more one is forced to confront the reality of Donald Trump's life, the more one comes to a grudging, horrified, sickly fascinated realization that he may be the single man most suited for confronting the intractable problems the United States faces today.

Think about it. We are currently facing the consequences of living on borrowed money in the wake of a huge real estate meltdown. Who, I ask you, has had a more intimate acquaintance with what happens when the value of your real estate holdings collapse and your creditors come calling than Donald Trump? And yet he keeps living to see another day! Donald Trump is the living, breathing proof of John Maynard Keynes' famous maxim: "If you owe your bank manager a thousand pounds, you are at his mercy. If you owe him a million pounds, he is at your mercy." In the 1990s, the sums Trump owed his creditors were simply too big. If forced into bankruptcy, Trump would have brought his lenders down with him. They had to cut a deal, extend him even more credit, and help him muddle through. You can call it a comeback! "Donald enjoyed an almost mystical ability to keep convincing bankers to lend him funds," writes O'Brien.

Even better: The terms of his second casino bankruptcy filing resulted in a contract guaranteeing Trump a minimum salary of $2 million a year, for three years, with a clause stating, "Mr Trump shall not be required to devote any fixed amount of time to the performance of his duties." That's some nice work, there.

It's doesn't take much reflection to realize that this is exactly the kind of life experience that suits our current predicament. Trump, as president, would realize that the extent of U.S. indebtedness to the bond market and foreign creditors is simply too great to allow for any kind of default, and he would undoubtedly find a way to weasel through. We need a president who knows how to get bailouts, not give them! And lest liberals fret at a corporate takeover of Washington, just listen to the endorsement of spending he gave to "Lifestyles of the Rich and Famous" in 1984: "I believe in spending extra money ... I believe in spending maybe more money than other people would think almost rational."

During his 2000 campaign for the presidency, his second wife, Marla Maples, called him an "ego-driven attention addict unfit to run for president." But this is unfair. America was built on unfettered ego, and there are clear advantages to self-delusion. We need a president who just never gets down in the dumps, who always can blithely misrepresent misfortune as heaven's boon and knows how to find a silver lining in any imploding balance sheet. Timothy O'Brien's biography paints a portrait of Trump suffused in Reaganesque hues. But for Trump, every day isn't just "morning in America" -- it's morning in America on a private jet with a hot babe bringing you a mimosa while you fly to Palm Beach for the unveiling of a statue of yourself. Trump is one upbeat mofo. O'Brien writes that his family followed "the power-of-positive thinking teachings of the Reverend Norman Vincent Peale," and it shows. As president, Trump wouldn't always be bringing us down by harping on rising healthcare costs or unmanageable deficits or the failure of our schools. He'd just redefine it all as a massive party, and we'd feel much better. It worked for Reagan, and Trump is nothing if not a creation of the go-go '80s.

I can't put it better than the producer of "The Apprentice," Mark Burnett (who also created "Survivor"): "[Donald Trump] is a brilliant businessman that stands for what is great about our country, what makes America the best country in the world."

Exactly. We need him.