The weird popularity of real-life Quidditch

The Harry Potter-inspired game is becoming more than a campus goof. It has full-contact action -- and it has brooms 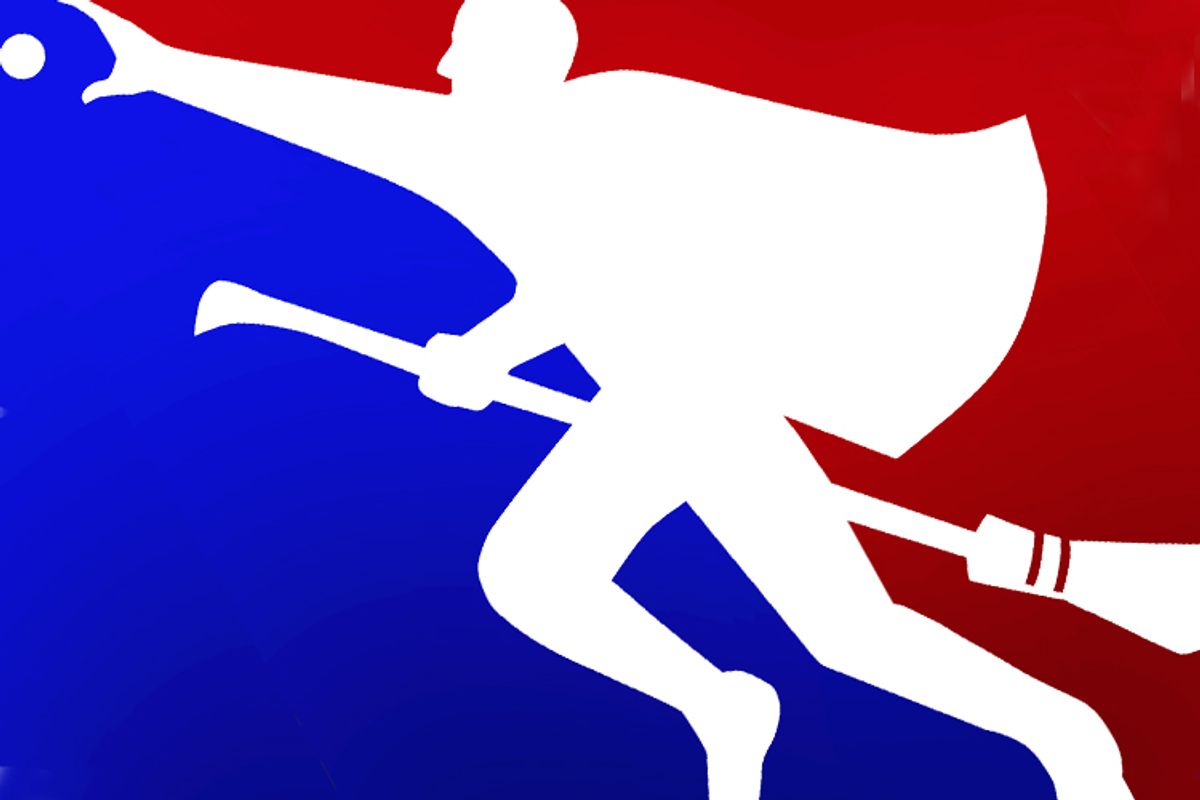 It's the second day of the Quidditch Western Cup, and two players, one male, one female, have just collided on the field. Both are flat on their backs, neither one moving, so the EMT walks over to take a look. After a minute or so, one player sits up, her face pink as a bad sunburn; the other is still thinking about getting up, but hasn't quite yet. It was a brutal, high-speed smack, but nothing one wouldn't see at any hard-fought soccer match, except for the fact that the two combatants weren't even playing in the same match. One of them, it seems, had come flying into the other from an adjoining field. And then there are the brooms -- yes, brooms -- which, moments before impact, both players had been gripping between their legs.

Welcome to the wild and weird sport of Muggle Quidditch, where boundary lines are suggestions, four balls are in play at any given time, and every player -- except for the elusive golden Snitch -- dashes about with large, bristly broomsticks held mid-thigh. Six years ago, the game was just a cool idea hatched by a group of students at Vermont's Middlebury College; today, there are more than 700 teams on high school and college campuses worldwide. Adapted from the high-flying sport popularized in the Harry Potter books and movies, the earthbound version boasts a governing body (the International Quidditch Association); a smart, funny magazine (the Monthly Seer); a World Cup competition, which, last year, drew 20,000 spectators; and an ever-expanding base of players and fans from San Diego to Seoul.

After the brooms, the first thing one notices about the sport is just how fast and physical it can be. Here at the Western Cup, a player got hit so hard it knocked out his contact lenses. Another collided brow to brow with an opponent, resulting in a broken nose and a nasty gash that required four stitches. At the 2010 World Cup in New York City, six players went to the hospital for injuries ranging from a dislocated ankle and a concussion to cracked ribs and a broken collarbone -- and that year's Cup had nothing on 2009, injury-wise. "I think there are some players that would like to see less physical contact," says Alex Benepe, the IQA's commissioner and CEO. "I have definitely not heard players clamoring for more physical contact, I'll put it that way." The sport draws athletes from a variety of college sports, from soccer and rugby to softball and lacrosse. There are also scores of Harry Potter-loving players who have never participated in team sports at all, whose love of quidditch is based more on their love of Hogwarts than any dreams they might have of game-time glory. The ongoing dilemma: How does one accommodate the influx of increasingly talented athletes to the sport, without alienating hardcore Harry Potter fans drawn to it by all the cool capes and brooms?

One solution: rein in some of the sport's crazier hits and take-downs. To that end, members of the IQA are currently drafting their first-ever referee guidebook, and will hold referee training workshops in the months leading up to the 2011 World Cup. "One of the biggest complaints from the 2010 World Cup was that the refs were not calling enough," says Alicia Radford, who serves as the IQA's treasurer and COO, as well as editor in chief of its monthly magazine. "Our players enjoy full contact, but they enjoy it legally." An 11-person committee is also drafting the fifth edition of the group's rulebook, adding clarity and detail to its section on physical contact.

Perhaps the biggest change this year is a planned move to create two separate divisions for the teams entering the 2011 World Cup. Squads will self-select into either division, and both divisions will award trophies (last year's championship statuette was a plastic wizard affixed to the top of a vodka bottle). "I think there's definitely a place for both sorts of teams," says Radford. "We want the newer teams who might take it less seriously to be able to come out and play teams who feel the same way, and play a cleaner game with maybe less tackling and craziness." Even with the planned changes, Quidditch will always be a game of bumps, bruises and worse. The sport is full contact, as "chasers" try to hurl a quaffle (a volleyball) through mounted hoops, while other players toss bludgers (kickballs) at the chasers. The "keeper" -- part goalie, part basketball center -- blocks shots, or tackles would-be shotmakers. The game ends when a "seeker" snatches a sock tucked into the back of the Snitch's shorts, which sounds easy, except the Snitch is typically quick as a hornet -- most are cross-country runners -- and can wrestle and body slam you, legally, but you can't return the favor. Charges, stiff arms and tackles are allowed, as are bludger fastballs to an opponent's face. "You get style points for a head shot," says Benepe.

There are no real boundary markers on the field either, so tackles and scrums often take place amid clusters of fans trying to get out of the way of battling players. As for the Snitches, they aren't bound by any rules, other than ones of "common sense" and human decency. The rule book says they should try not to slam into spectators, but just about anything else goes. "I've seen Snitches climb buildings, take off on bicycles, steal things from players," says Benepe. "They kind of have a blank check."

The result is one of barely controlled chaos -- and most of the players wouldn't have it any other way. Willie Jackson, a keeper for Arizona State University, combines surprising speed with an MMA grappler's mentality. On the way to the finals of the Western Cup, which ASU won handily, Jackson could be found tackling some players, running full steam into others, and sitting atop still others. "The keeper's greatest defense is the ground," he says. "If you can get the other player on the ground and stay on top of them, you know the ground isn't going anywhere."

While many of the players are quick to point out that quidditch is no rougher than, say, football, or rugby, press them on it, and soon you start to hear the war stories. Eyes poked out. Cracked ribs. Bleeding head wounds and concussions. Players post photos of some of the worst of them online; others are content to merely write about them on their team's Facebook page. "Amazingly, there haven't been any groin injuries with the brooms," says Benepe. "That's what people always ask. I've seen a few people bust their lips on them, but I've never seen anything around the groin area. Or at least people don't talk about it." There's a break in the action on the field, so fans and players alike go to check out the assortment of booths just north of the announcer's table. Vendors are selling all manner of Harry Potter memorabilia, including wands, broomsticks, plastic snitches and chocolate frogs. Kids, and not a few adults, sport Griffyndor robes and wizard hats. One large man -- or woman, one can't be sure -- is dressed as Rubeus Hagrid, Hogwarts' hirsute, half-giant groundskeeper. There are jugglers and carnival games and Harry Potter-themed snacks.

Rushing to and fro is the tournament director, Harrison Homel, who is easy to spot, as he is the only man in the park sporting a bowler hat and a big, bushy beard. In two years, the UCLA poli sci major has gone from teams correspondent (the lowest rung on the IQA ladder) to western regional director. "I never went out for sports in high school," says Homel. "That was never my speed." Even so, his love of Rowling's magical world -- well, that, and the brooms -- proved irresistible, and he soon found himself playing on two teams: Ventura County's Moorpark College, where he started the school's squad, and later, at UCLA. "I'm a Harry Potter nerd in a big way," he says.

As a player, organizer, and regional director, Homel has seen athletes of every skill level on the Quidditch field, some jocks, some not, some who love Rowling, some who could care less about her and her made-up world. "I came from a Harry Potter place, but I know a lot of people who didn't," he says. "There absolutely are players who haven't read the books. For some, this is the only Harry Potter-related thing they do. The game is sort of able to bridge that gap between people who otherwise aren't playing any sports, and people who are very, very active, but maybe aren't as interested in nerding out about Harry Potter."

If any one thing keeps both camps together, though, it just might be their mutual love of a sport that never takes itself too seriously. Rules and refs and hard hits aside, it's a game based on a kid's book. A wildly popular kid's book, but a kid's book, just the same. It's a game where a big chunk of the audience look like team mascots, a sport where a big bone of contention is whether capes will be mandatory at the upcoming World Cup.

"We're running around on broomsticks," says Homel. "There's absolutely a sense of tongue-in-cheek that comes with it. I think the minute that we get off the brooms, then we're just playing any other sport. Then it's football. There's absolutely a competitive aspect to it, but at the end of the day, you're still on a broom."