The director's latest, "The Greatest Movie Ever Sold," is an ingeniously constructed look at product placement 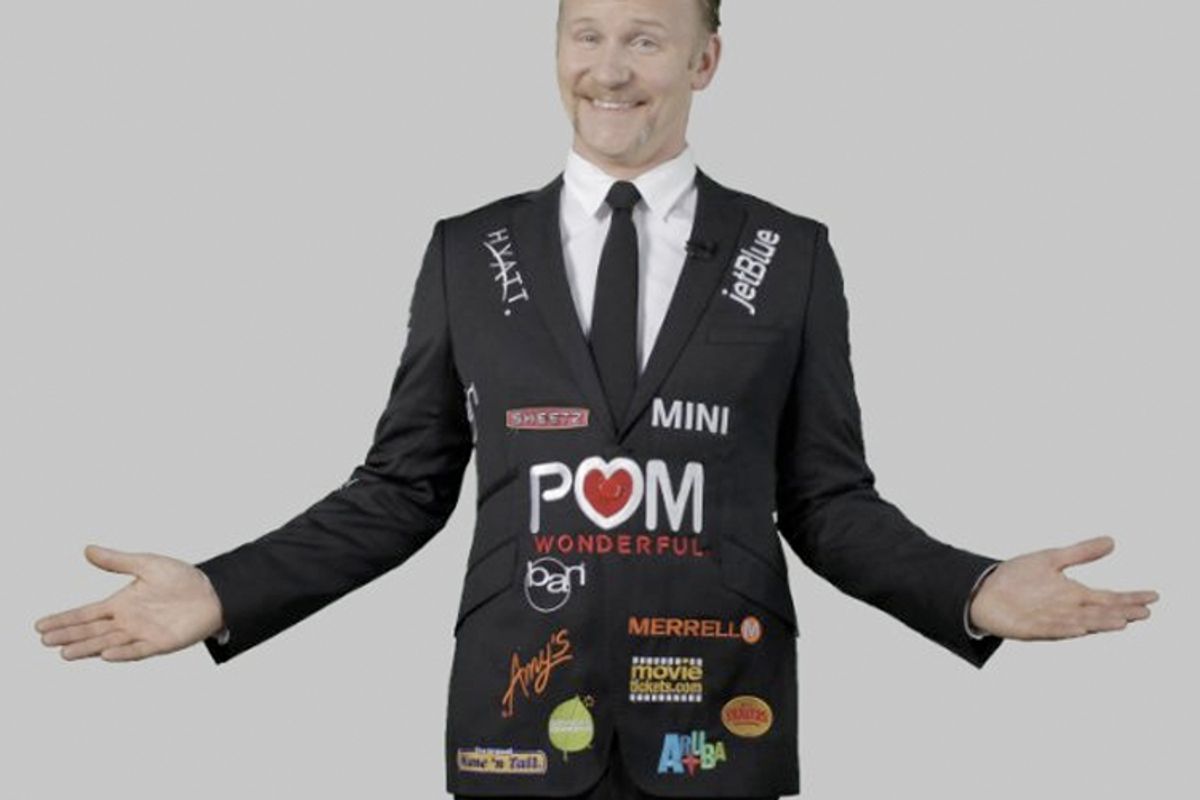 "POM Wonderful Presents: The Greatest Movie Ever Sold" is the movie Morgan Spurlock was put on earth to make. It might not be a great movie, or even an especially deep one, but this documentary about advertising, marketing and product placement made a stronger impression on me than anything Spurlock has done before; in fact, it made me feel a bit sick inside. In its accessible, lovable, mainstream, attractively photographed and scored-with-recognizable-pop-tunes way, it suggests that popular culture is just one booth in an immense and blandly ruthless bazaar, a material and spiritual marketplace in which artists who all think they're wonderful, decent people barter bits of their integrity (or the illusion of their integrity) because they are convinced the alternative is a life of poverty and irrelevance.  They aren't completely wrong.

"The Greatest Movie Ever Sold" (as I will refer to it hereafter, because I don't want to feel like I'm just advertising pomegranate juice in every paragraph) is another in the recent string of formally inventive, self-aware, snake-swallowing-its-own-tail documentaries -- a subgenre whose greatest example is Banksy's "Exit Through the Gift Shop." On first glance, Spurlock's new picture seems more straightforward than Banksy's because of its traditional, old-school documentary elements, including an on-camera host who interviews experts and political celebrities (Ralph Nader! Noam Chomsky!) and clowns around with props. But when you get to the end, you realize it's a chilling example of form following function.

Spurlock set out to make a documentary about product placement, funded entirely by contributions from corporate sponsors, showing viewers what conversations must take place behind the scenes, what documents have to be signed, how much sponsors pay for inclusion,  what conditions they place on their participation, how much screen time or recognition the filmmaker gives the products in return, and other typically invisible aspects of show business. It's a film about how films don't get made on a commercially acceptable scale, much less seen by large numbers of people, unless corporations are permitted to influence and in some cases dictate content. The concept of "selling out" is built right into the film, along with a tutorial on modern advertising's more sinister incarnations (including lavishly funded P.R. campaigns that are meant to look like spontaneous expressions of popular taste).

What makes it all work -- and raises it several notches about Spurlock's other efforts, including "Super Size Me" -- is its playful structure, which makes it feel as though you are seeing a cheerful and sinister movie create itself before your eyes. "The Greatest Movie Ever Sold" is actually a very long making-of documentary; the thing being made is advertising. Spurlock is shown driving Mini Coopers, eating Amy's Pizza, interviewing people at Sheetz's gas station/convenience stores, flying Jet Blue, and drinking POM Wonderful juice because they're all sponsors of "The Greatest Movie Ever Sold." Sometimes the movie stops dead in its tracks to show an ad for one of the placed products. These commercials star and are created by Morgan Spurlock -- who, according to an expert Spurlock consults early in the story, is himself a "brand," or at least as much of a "brand" as an American documentary filmmaker can be who isn't named Michael Moore or Ken Burns.

Along the way, the movie explains and perversely justifies the career of Morgan Spurlock, who has been criticized by more traditional documentarians for creating nonfiction-stories-as-marketable-stunts (see "Super Size Me" and his TV series "30 Days"), and for intentionally letting them revolve around his gregarious, mustachioed screen persona instead of whatever subject he's purporting to examine. Spurlock talks on-screen about how his goal here is "transparency." He achieves that, though not in quite the way you might expect or want. The film is transparent in the sense that you can see through everything it's doing, and it's so brazen about each machination that you can't help laughing. The movie's slogan could have been, "Come See Why This Movie Exists." That there's not much there beyond what you probably already knew (or suspected) somehow makes it more coldly effective. You can't say, "This is just a big, long ad for a bunch of products," or "This is just a big ad for Morgan Spurlock" without hearing an inner voice-of-reason snap, "Well, of course, dummy! You expected something else?"

The only parts of the movie that should truly be considered content, or "the real show," are the the 30-second spots, and the dazzling final stretch in which we see all of Spurlock's incidents of contractually mandated selling-out, scored to a specially commissioned OK Go song titled "The Greatest Song I Ever Heard." (It's a terrific song.) Everyone in the movie is complicit in the Spurlock's thesis, which among other things holds that nothing of any consequence happens in the entertainment business, America, or the world without corporations providing the money and calling certain shots in return.

Advertising is a big part of the process, maybe more so now than at any time since the 1950s. And the public's alleged sophistication, or cynicism, about this process doesn't defuse the effectiveness of the ads one bit. As long as sponsors get their products into a movie or TV show, and the exposure complements the product's image, they don't care if the project is intended to critique or explain what they do. The important thing is to be seen, to make an impression, to become part of the fabric of people's lives, to burrow into their subconscious and stay there.

And that's precisely what this film's product placement does. Viewers laugh uproariously when they see Spurlock handing Ralph Nader a pair of corporate-sponsored sneakers or appearing in an ad for an airline with his adorable young son, because they're hip to what happened behind the scenes to make these moments exist. Yet these same moments, however self-aware, are still ads for products, and they probably make a stronger impression in Spurlock's movie than they would have if you'd seen them on TV jumbled among other ads. No matter how hard Spurlock tries to parse the voodoo science of advertising, marketing and product placement, the result still makes the sponsors happy, because their products appear on a big screen, showcased with flair and humor. The movie must be giving them what they want, otherwise they wouldn't have agreed to be associated with it. Spurlock knows this, and he knows you know it, too.  It's one gigantic, multifaceted scam, and we're all in on it.

As the story, or "story," unfolds, Spurlock periodically asks himself if he is compromising his integrity as a filmmaker because he has to do a favor for a given sponsor, or follow its rules and conditions. But these scenes feel half-assed and obligatory. Spurlock has already established that this movie is about the machinations that corrupt artists and their art. This movie, by virtue of its very existence, is compromised, just as the public school districts Spurlock spotlights in the film are compromised by having to sell ad space to pay for necessary expenses, and just as the cities Spurlock visits are compromised by having to sell ads on benches and buses and trains to fill their barren coffers. Corporations own everyone and everything, including the supposedly neutral spaces we inhabit every day.  (A fascinating, regrettably brief sequence sends Spurlock to São Paulo, Brazil, the first major city to ban advertising signage from its streets. The ad-free vistas are like a hot shower rinsing the dirt from your brain; when I exited the screening room afterward, my city's streets seemed more oppressive than usual.)

In light of all this, when Spurlock frets (usually for all of a minute) over whether he is surrendering some or all of his autonomy in this deal or that deal, the moment feels almost like a joke -- a spoofy nod to the inevitable scene in any fiction film about a striving hero where the protagonist worries he's losing touch with his core values. But in those movies, the moment of doubt ends with the hero rallying to righteous victory over whatever person or institution is making him soul-sick. That's not the case here. Spurlock is an utterly charming hustler, the sort of guy who could sell the city of Springfield a second monorail. A sequence wherein Spurlock appears on Jimmy Kimmel's talk show decked out in a NASCAR-like, corporate-logo-covered outfit, and informs Kimmel that the sole purpose of this appearance is to create a scene for the movie in which Spurlock talks to Jimmy Kimmel, the movie goes down the rabbit hole and never comes out.  Spurlock looks like a goofy sci-fi pimp, whoring himself to the known universe.

Film Salon Movies Our Picks The Greatest Movie Ever Sold