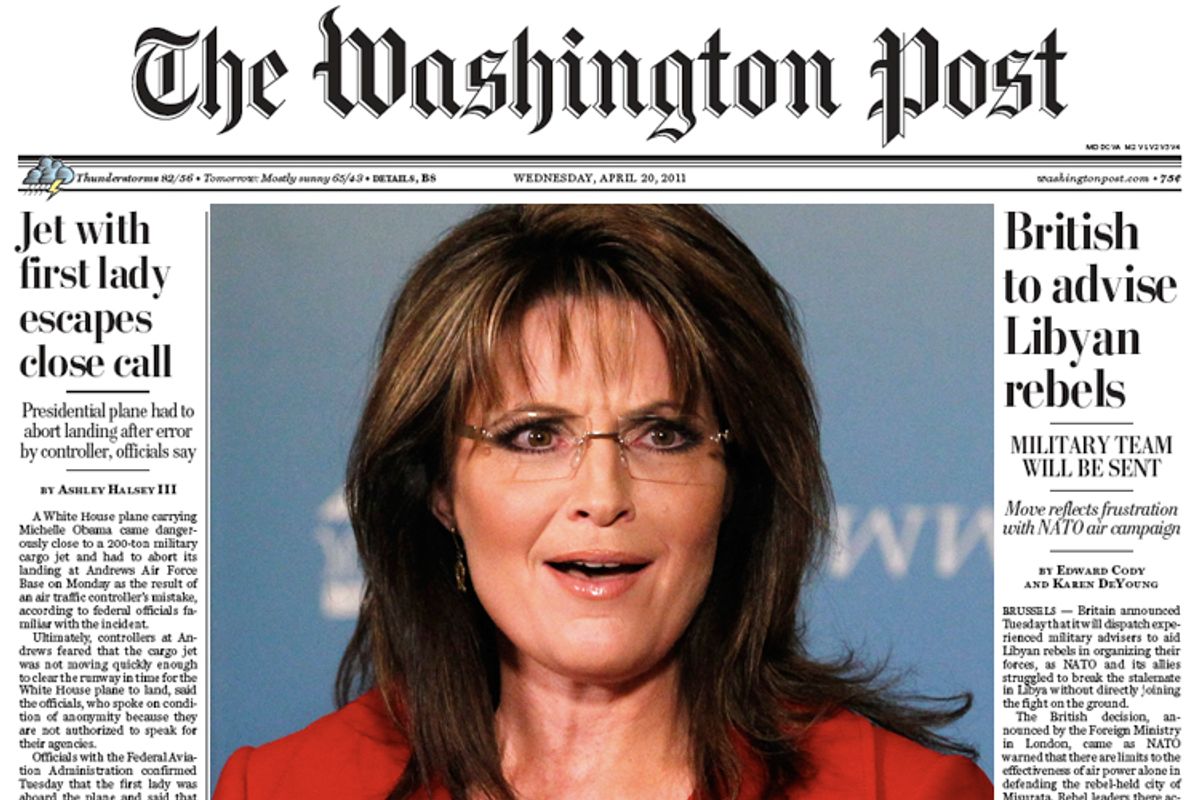 Last week, Washington Post editorial page editor Fred Hiatt excoriated Republicans for climate change denialism. As he noted, mainstream, prominent Republicans used to accept the established science on climate change, but in the last few years, many of them have begun saying things they can't possibly believe, because of ideology and political expediency.

Hiatt called out Sarah Palin, in particular, for writing something Hiatt believes to be patently untrue:

Palin, who as Alaska governor supported efforts to limit greenhouse gas emissions, in 2009 wrote in The Post, “But while we recognize the occurrence of these natural, cyclical environmental trends, we can’t say with assurance that man’s activities cause weather changes.”

It shows great intellectual courage for Hiatt to criticize something published in the newspaper he works for. Something published by him, because he is the editorial page editor. Something he published and then had a deputy defend when other people pointed out that it was wrong and stupid. So Hiatt is now apparently acknowledging that he specifically prints things he knows to be untrue and irresponsible.

(Plus, as Matt Yglesias pointed out, Hiatt has published a half-dozen George Will columns containing lies about climate science. Actual, demonstrable lies.)

Maybe Hiatt doesn't think it's his job, as editorial page editor of the Washington Post, to only print things that are actually true. If so, his job is a very easy one! No editing is being done, at all!

In the past, Hiatt has made it sound like he thinks that labeling something "opinion" frees its author and editor from any responsibility to stick to actual facts supported by actual evidence, but surely only a sociopath with no respect for his audience actually thinks like this. Maybe Hiatt is actually performing a sort of public service, by constantly printing irresponsible misinformation from people who are consistently wrong about everything. Maybe he will now begin debunking and criticizing every misleading column and editorial he's published during his tenure. It was like a long-term art project, or something?

Next month he'll write something like, "there can be no moral justification for sanctioning torture, but even if we sidestep the moral issue, Marc Thiessen's work for the Washington Post and elsewhere is full of untruths and distortions." Then maybe a short series on various lies published by the Post prior to the invasion of Iraq. Maybe he'll eventually get around to publicly noting that Nobel prizes are never awarded posthumously, making this entire column pointless.

He could write a week's worth of columns on how awful Richard Cohen is!

I'm excited for this new age of the Post belatedly pointing out the various stupid things it prints, years after the fact.