When Rush bet $2 million that Clinton would ruin the economy

"Not one tax increase has ever, ever reduced the deficit" 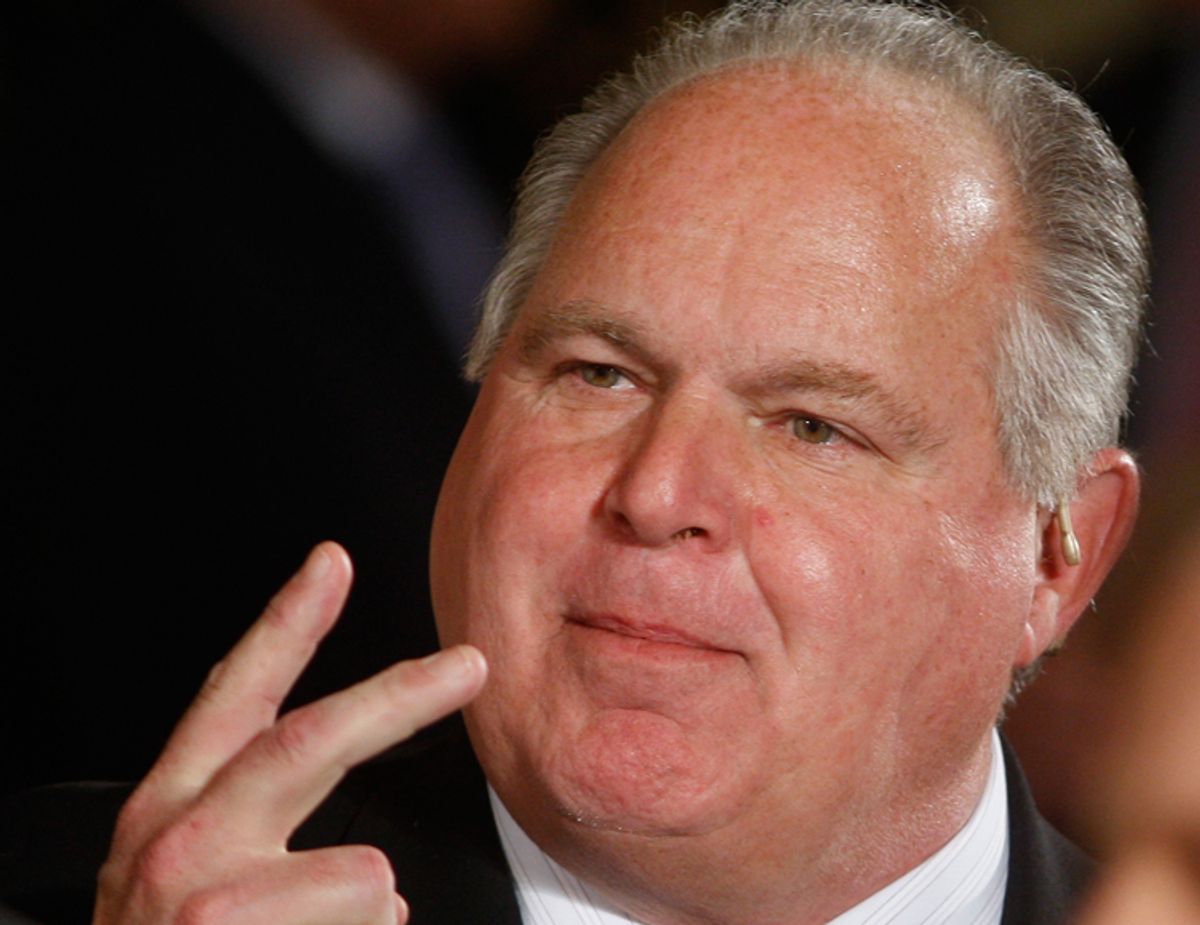 When President Obama called last week for raising taxes on the wealthiest 2 percent of Americans to help offset rising deficits, Rush Limbaugh responded with this:

"The Obama way has been tried. For as long as there have been human beings who used to be monkeys walking the Earth, it's been tried, and it has never worked. That was my concession to the Darwinists in the audience. But it doesn't work. It's been tried in Cuba. Is there anything great down there? Tried in the Soviet Union, Russia. Anything great over there? Chicoms (Chinese Communists). The greatness that's occurring in the Chicom circumstance happens to be to the extent that they are going capitalist in order to have any kind of a growing economy."

Interestingly, Rush was equally adamant the last time a president proposed using "the Obama way" -- i.e., tax hikes on the affluent -- to combat a serious deficit problem during a time of economic hardship.

This was back in 1993, when (as I detailed on Tuesday) Republicans in the House and Senate stood in unanimous opposition to President Clinton's deficit reduction plan, which called for raising rates on the top 1.2 percent of income earners. That budget ended up barely passing Congress and, thanks to the GOP's demagoguery, was a contributing factor in the Democrats' 1994 midterm election debacle. But once implemented, it also defied the GOP's dire predictions that it would kill what was then a tentative recovery, cause another recession, cost millions of Americans their jobs, and lead to even worse deficits.

After my piece was published on Tuesday, I heard from a reader (Daniel Hunt) who reminded me about one of the reasons why Republicans in Congress in '93 were so united in their opposition: Rush Limbaugh -- whose influence on the right was arguably greater back then (because of less competition from other radio and Internet voices) -- used his radio and television to rail against Clinton's budget, and to establish opposition to it as a litmus test for "real" conservatism.

For instance, here's a monologue from Rush's (Roger Ailes-produced) television show from July 20, 1993 -- just two weeks before the plan cleared the House and Senate:

If the Republicans decide to compromise on any tax increase, they are participating in the damage that this plan will cause the country. They are helping and are complicit in the damage this plan will cause to the people who make this country work. And by compromising on any tax increase whatsoever, the Republicans are then forfeiting any opportunity to say, Hey, it wasn't our idea. Hey, we had no part in this. Hey, we didn't have anything to do with it.' By going along with these tax increases on the wealthy, then the Republican Party or the members of the party who do that are forfeiting any political credibility in the future in opposing this plan and for their own future.

The Republican Party, I want to tell you right now, is never ever going to come back and win the White House unless they unite on the concept that this government needs no new tax rate increases to operate. This government simply has enough money to operate as it is. Tax rate increases slow down economic activity. It is not a theory. It's not an opinion. It is fact. It is true. And if the Republican Party can't unite around the idea that the way to cause economic growth, the way to create wealth is to rid people of the shackles of an oppressive government veer--via high tax rates, then the Republican Party is forever going to be disunified and is not going to be able to mount a credible opposition to the Democratic plan which is total tax increases, total big government.

It went like this, night after night, for months in the spring and summer of '93. The claims were always the same. At one point, Rush even offered a $1 million bet to the Democratic National Committee that the economy would get worse if the plan was enacted; as final passage drew closer, he raised the stakes. From his Aug. 2, 1993, television show:

Not one tax increase has ever, ever reduced the deficit. And this isn't either. And I am here tonight to announce that my original $ 1 million bet with the Democratic National Committee that this plan is going to make the economy worse--I'm raising the stakes to $ 2 million.

Well, he was right about the approval ratings (at least for the next 18 months or so). But nothing else. The unemployment rate was 6.8 percent when Congress approved the budget. It fell to 6.5 percent by the end of '93, 5.9 percent by September '94, and 5.4 percent by early 1995. Toward the end of the decade -- after years of sustained growth -- it even dropped below 4 percent. Nor did inflation take off, as Rush claimed it would. And deficits: They fell steadily from the moment the plan was passed; by 1998, the country was running a surplus. (Maybe the DNC should have accepted Rush's wager, instead of ignoring him...)

The standard revisionist claim from the right is that the prosperity and balanced budget of the 1990s was a product of the Republican Congress, not Clinton's budget. But their revisionism misses the point: The claim -- pushed by Rush and echoed by every Republican in Congress -- was that Clinton's budget, because it raised taxes on the wealthy, would make recovery impossible. It didn't do that at all -- and all of the economic indicators that Rush said would get worse actually improved between the time the plan was passed and when the Republicans took control of Congress in '95.

In other words, we have a decade's worth of compelling evidence that raising income taxes on the wealthy can reduce deficits and (at the very least) not inhibit sustained economic growth. And yet, Limbaugh is still telling his listeners -- in rhetoric that Republicans on Capitol Hill are still parroting -- that this has "never worked."