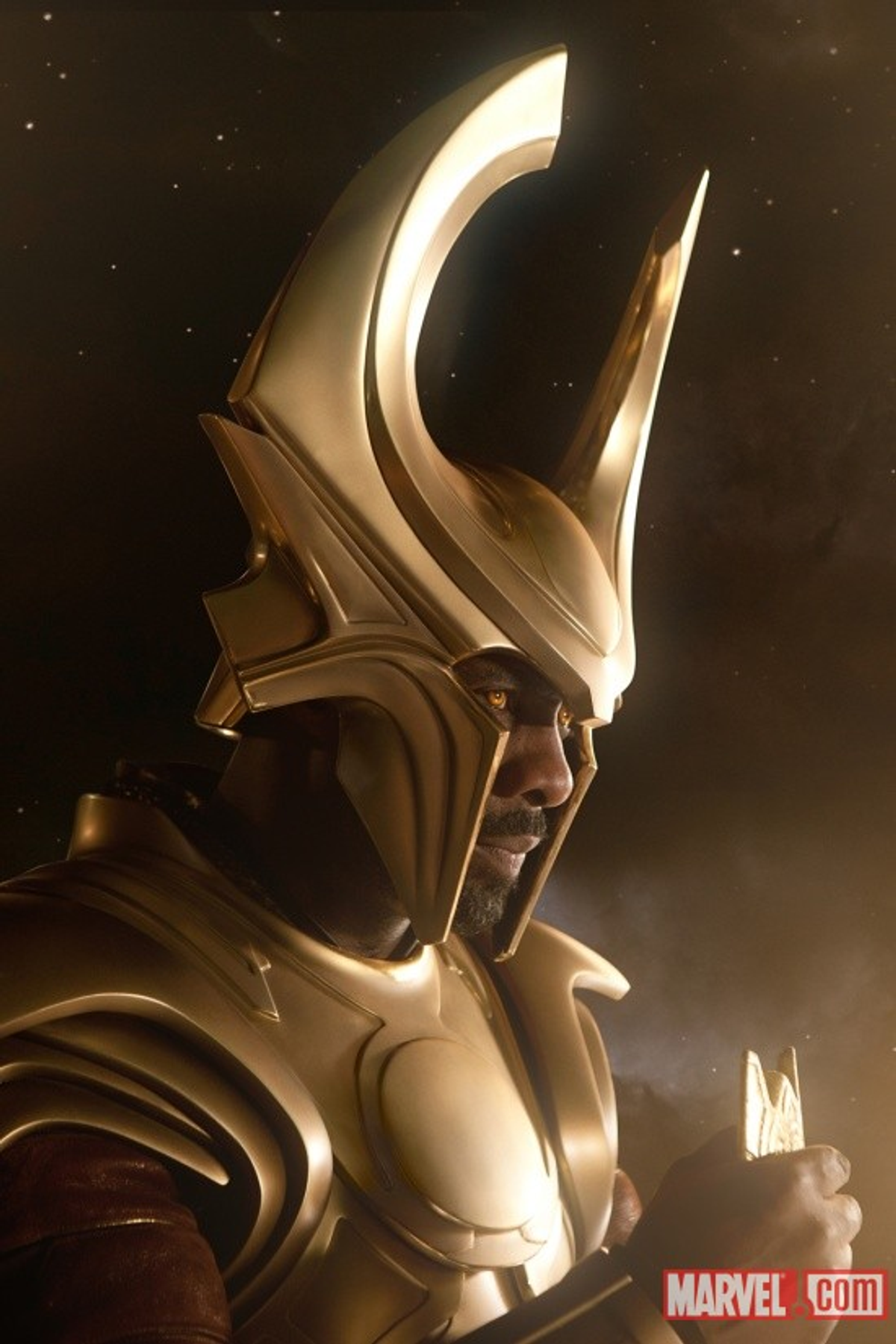 Idris Elba as Heimdall in "Thor"
--

As of Wednesday morning, 1,483 people liked the "Boycott Thor (2011) by Marvel Studios" Facebook page. Among those showing their virtual disapproval of director Kenneth Branagh's upcoming comic book movie is Elmer Smith of Bradenton, Fla., a "47 year old proud son of the South" with a Confederate flag combined with skull and crossbones as his profile pic. On the Facebook page itself, Ian Tucker writes, "I'll watch this when they remake 'Shaft' with a white guy." Nikola Brdja Spaskeh, assault rifle in hand in his profile image, adds, "Jewlywood, more History, less Political Correctness and Liberal Agenda," before wondering if Hollywood will make a movie with "Will Smith as Adolf Hitler" and bemoaning the stealing of European heritage. There is also a link where you can buy "Boycott Thor" T-shirts, bumper stickers and even aprons on zazzle.com.

The reason for the outrage isn't that Will Smith was cast as the Norse God of Thunder, but because Idris Elba, a British actor of African parentage best known as Stringer Bell on "The Wire," has been chosen to play Heimdall, the steadfast guardian of the rainbow bridge to Asgard. The boycott was organized late last year by the Council of Conservative Citizens, a white nationalist organization that condemns interracial marriage and refers to blacks as "a retrograde species of humanity." A Dec. 27, 2010, entry on the group's "Boycott Thor" website rages against the multiracial Valhalla depicted in the upcoming movie, and points out that Stan Lee "has personally funded Hillary Clinton and Ted Kennedy."

"It is very clear where his bias lies," the anonymous author quips.

Surprisingly, African-American fantasy author Charles Saunders, creator of the Sub-Saharan sword and sorcery hero Imaro, weighs in on the side of those who want to keep Heimdall white. "The internal integrity of those mythologies should be acknowledged and respected," he writes in a Jan. 25 blog post titled "The Heimdall Hullabaloo." Saunders' reasons for disparaging an African Heimdall stem from being asked to rework his African-descended characters as Caucasians for a 1985 Roger Corman-produced film called "Amazons." Saunders finds Hollywood cynicism as the motivation for shifting the race of his own characters in the 1980s and Heimdall today. "To my mind there is something wrong with both pictures," Saunders concludes, "and I don't need the likes of the Council of Conservative Citizens or 'Boycott Thor' to tell me that."

But both Saunders and the Council of Conservative Citizens get this all horribly wrong. The casting of Elba has nothing to do with the cultural authenticity of 8th century Scandinavian seafarers, but instead hails from a mid-20th century American cinematic tradition. A few years before the sit-ins and freedom rides or the passage of the Voting Rights Act, the Viking movies produced with American stars and financing had started the march toward integration with the casting of Trinidad-born Calypso singer Edric Connor as Sandpiper in the 1958 Kirk Douglas epic "The Vikings." However, Connor's role in "The Vikings" is closer to a slave narrative than a berserker's saga as he and Tony Curtis escape their Norse bondage by stealing a ship and sailing it for England. This one sequence of "The Vikings" has an alarming parallel to "The Defiant Ones," Curtis' other major film of 1958 where he and Sydney Poitier are chained together as they make their getaway from a brutal Southern chain gang.

During the same year that Lyndon Johnson signed the Civil Rights Act into law, Sydney Poitier's Moorish king in "The Long Ships" (1964) was an antagonistic equal to Richard Widmark's Viking treasure hunter. Poitier and Widmark had already faced off from opposite sides of the color line in the tense racial drama "No Way Out" (1950), which was also Poitier's first film. "The Long Ships" would see the two replaying this conflict only with more sword play and Viking panty raids on Portier's harem. Although the conflict between Moor and Viking is unlikely to upset even the most bigoted "Thor" boycotter, "The Long Ships" shows a reticence on the part of producers to place Vikings in a mono-ethnic setting.

More thorough integration of movie Vikings would have to wait all the way until 1978 with the release of "The Norseman," a bargain basement effort filmed in Florida swampland with Lee Majors wearing a Roman breastplate for some reason and Italian guys in obvious wigs as totally evil Native Americans. As dwindling factory production in America had become integrated during the last throes of organized labor dominance, "The Norseman" gives us NFL hall of famer Deacon Jones in a horned helmet fighting alongside guys with names like Thorvald, Ragnar and Olif. Near the film's conclusion, Jones risks Indian arrows to carry the corpse of a fallen Viking back to the ship because the dead man "deserves a Norse burial." Unfortunately, Jones' character is named Thrall although it's doubtful that a Heimdall of any color would bar his entrance into Valhalla when the time comes.

And now that the U.S. has its first African-American president, we also have black Heimdall standing guard over the Rainbow Bridge, deciding which warriors are worthy of entering a multi-ethnic Asgard like an armor-plated St. Peter. While the 1,483 boycotters clicking on the thumb icon on the "Boycott Thor" Facebook page will hardly matter to the success of Marvel/Paramount's "Thor," Elba still felt the need to answer his critics as recently as last week. In an April 8 interview with Female First, Elba admits to questioning race when Branagh first offered him the role, but later came around. "It was so refreshing -- and a testament to him as an actor and director that his casting was genuinely color blind," Elba said before adding, "I feel very proud of being part of that movie."

What should rankle white supremacists even more is that a New York Jew who fought the Nazis during World War II is responsible for making the Norse Thunder God into a modern superhero. Marvel Comics artist Jack Kirby along with writer Stan Lee first put Thor into a comic book in 1962, and had him doing things that were decidedly inauthentic. During Thor's early four-color adventures, he fought the Stone Men of Saturn, Robert Louis Stevenson's Mr. Hyde, and even the Greek gods. Four years later, Kirby integrated Marvel's characters with the creation of the Black Panther, the first black superhero. "There were plenty of white superheroes, so I thought there should be a black hero too," Kirby told me unpretentiously during one of the times I was fortunate enough to speak with him. After Kirby jumped to DC Comics in the early 1970s, he created that company's first black superhero as well in the debut issue of "The Forever People" (1971). Ironically, that character's name was Vykin the Black.