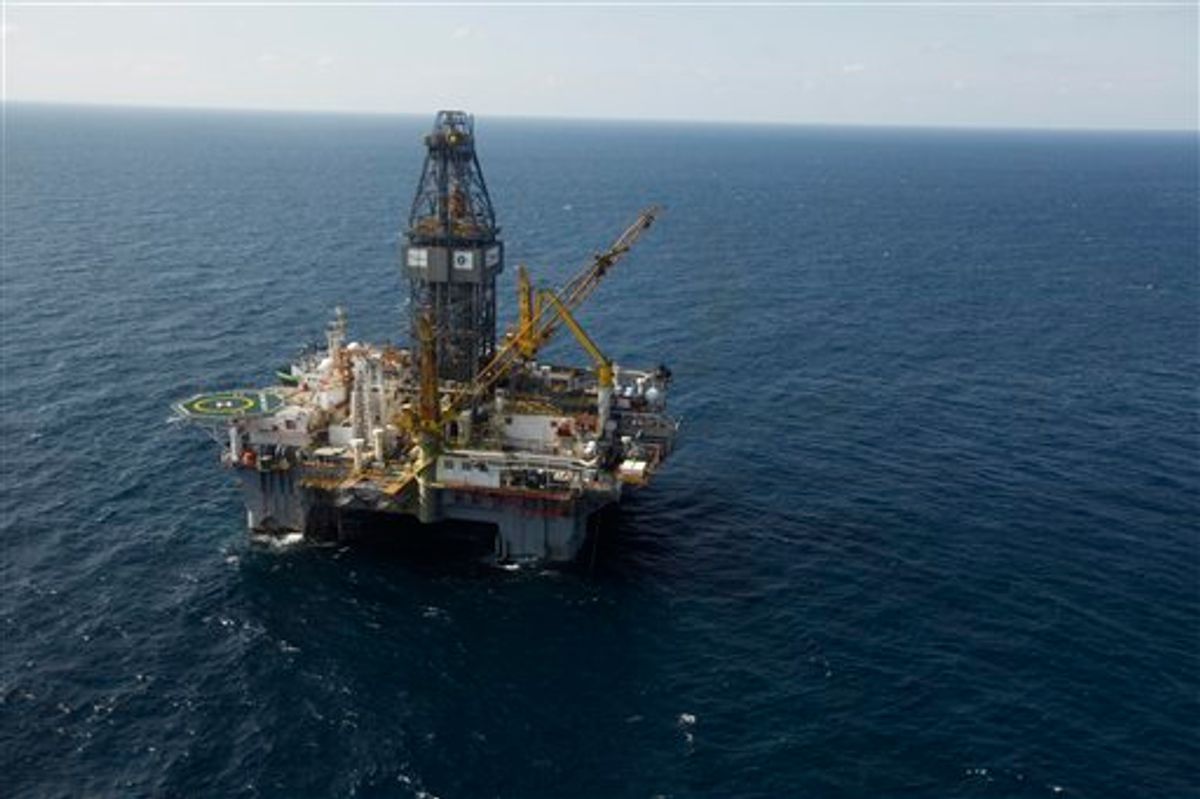 FILE - In this Sept. 18, 2010 file photo, the Development Driller III, which drilled the relief well and pumped the cement to seal the Macondo well, the source of the Deepwater Horizon rig explosion and oil spill, is seen in the Gulf Of Mexico, off the coast of Louisiana. More than 3,200 oil and gas wells classified as active lie abandoned beneath the Gulf of Mexico with none of the cement plugging normally required to help keep unused wells from leaking, threatening the same waters fouled by last year's BP oil spill, The Associated Press has learned. (AP Photo/Gerald Herbert, File) (AP)
--

Relatives of some of the 11 men who died aboard the Deepwater Horizon oil rig are flying over the Gulf of Mexico on Wednesday, back to the epicenter of the worst offshore oil spill in the nation's history.

Meanwhile, on land, vigils were scheduled in Louisiana, Mississippi, Alabama and Florida to mark the spill.

On the night of April 20, 2010, the Deepwater Horizon, a rig owned by Transocean Ltd., burst into flames after drilling a well for BP PLC, killing 11 workers on or near the drilling floor. The rest of the crew evacuated, but two days later the rig toppled into the Gulf and sank to the sea floor. The bodies were never recovered.

Over the next 85 days, 206 million gallons of oil -- 19 times more than the Exxon Valdez spilled -- spewed from the well. In response, the nation commandeered the largest offshore fleet of vessels since D-Day, and BP spent billions of dollars to clean up the mess, saving itself from collapse.

"I can't believe tomorrow has been one year because it seems like everything just happened," Courtney Kemp, whose husband Roy Wyatt Kemp was killed on the rig, wrote on her Facebook page Tuesday. "I have learned a lot of things through all of this but the most important is to live each day as if it were your last ... what matters is if you truly live."

In a Wednesday statement, President Barack Obama paid tribute to the 11 men killed in the blast and thanked the thousands of responders who "worked tirelessly to mitigate the worst impacts" of the oil spill.

"But we also keep a watchful eye on the continuing and important work required to ensure that the Gulf Coast recovers stronger than before," Obama said in the statement.

The president said significant progress has been made but the work isn't done.

Transocean invited up to three members of each family to attend the flyover. They were expected to circle the site a few times in a helicopter, though there is no visible marker identifying where their loved ones perished. At the bottom of the sea, 11 stars were imprinted on the well's final cap.

Several families said they didn't want to go on the flyover, and Transocean decided to not allow media on the flight or at a private service later in the day in Houston.

The solemn ceremonies marking the disaster underscore the delicate healing that is only now taking shape. Oil still occasionally rolls up on beaches in the form of tar balls, and fishermen face an uncertain future.

Louis and Audrey Neal, a Mississippi couple that survives on catching crabs, said it's gotten so bad since the spill that they're contemplating divorce and facing foreclosure as the bills keep piling up.

"I don't see any daylight at the end of this tunnel. I don't see any hope at all. We thought we'd see hope after a year, but there's nothing," Audrey Neal said.

"I'm in the worst shape I've ever been in my whole damn life. I'm about to lose my whole family," he said. "I can't even pay the loans I have out there. That's how bad it's gotten."

His wife said the financial hit was only part of the past year's toll. "Our lives are forever changed," she said. "Our marriage, our children, it's all gotten 100 percent worse."

She said the couple received about $53,000 from BP early on, but that was just enough money to cover three months of debt. They haven't received a dime from an administrator handing out compensation from a $20 billion fund set up by BP, they said.

Still, it's not all so bleak.

Traffic jams on the narrow coastal roads of Alabama, crowded seafood restaurants in Florida and families vacationing along the Louisiana coast attest to the fact that familiar routines are returning, albeit slowly.

"We used to fuss about that," said Ike Williams, referring to the heavy traffic headed for the water in Gulf Shores, Ala., where he rents chairs and umbrellas to beachgoers. "But it was such a welcome sight."

Many questions still linger: Will the fishing industry recover? Will the environment bounce back completely? Will an oil-hungry public ever accept more deepwater drilling?

"It seems like it is all gone," said Tyler Priest, an oil historian at the University of Houston. "People have turned their attention elsewhere. But it will play out like Exxon Valdez did. There will be 20 years of litigation."

Most scientists agree the effects "were not as severe as many had predicted," said Christopher D'Elia, dean at the School of the Coast and Environment at Louisiana State University. "People had said this was an ecological Armageddon, and that did not come to pass."

Biologists are concerned about the spill's long-term effect on marine life.

"There are these cascading effects," D'Elia said. "It could be accumulation of toxins in the food chain, or changes in the food web. Some species might dominate."

Meanwhile, accumulated oil is believed to lie on the bottom of the Gulf, and it still shows up as a thick, gooey black crust along miles of Louisiana's marshy shoreline. Scientists have begun to notice that the land in many places is eroding.

For example, on Cat Island, a patch of land where pelicans and reddish egrets nest among the black mangroves, Associated Press photographs taken a year ago compared with those taken recently show visible loss of land and a lack of vegetation.

"Last year, those mangroves were healthy, dark green. This year they're not," said Todd Baker, a biologist with the Louisiana Department of Wildlife and Fisheries.

Land is eroding on sites where the oil has killed vegetation, he said.

Roseau cane is growing again where it was cut away during early cleanup efforts, but Barham said the 3- to 4-foot-high stalks should be a lush green. Instead, they were pale green and brown.

"It's because of oil in the root system," Barham said. He put his hand into the dirt and pulled up mud saturated with oil. Tossing the sludge into nearby water, it released a rainbow-colored sheen.

Barham complained that BP had not done enough to clean the area. "What they've done thus far is not working."

In the remote Louisiana marsh, there's still yellow boom in places -- not to keep oil out but to keep the tides from carrying oil to untouched areas.

Confidence in Louisiana's seafood is eroding, too.

"Where I'm fishing it all looks pretty much the same," said Glen Swift, a 62-year-old fisherman in Buras. He's catching catfish and gar in the lower Mississippi River again. That's not the problem.

But the BP spill has faded from the headlines, overtaken by the tsunami and nuclear disaster in Japan, unrest in the Middle East and political clashes in Washington.

"Nationally, BP seems like a dim and distant memory," said Douglas Brinkley, a Rice University historian. But the accident will have long-lasting influence on environmental history, he said.