Can the GOP solve its birther problem before it's too late? 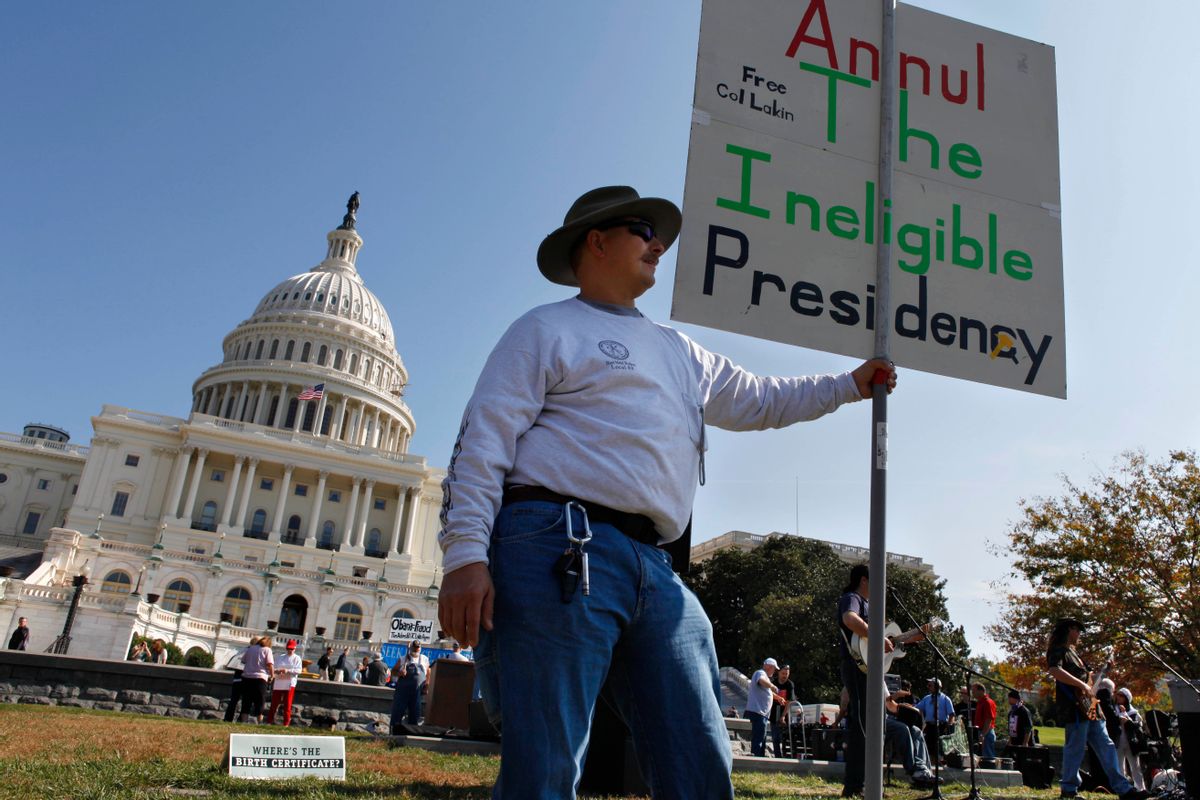 This is some mess the GOP has made for itself: According to a new poll from the New York Times and CBS News, barely three in 10 Republican voters (32 percent) say they believe the president of the United States was actually born in this country. The rest are split between believing Barack Obama was born on foreign soil (47 percent) and not being sure where he was born (22 percent). (These numbers add up to 101 percent, presumably because of rounding.)

This, of course, helps explain why Donald Trump has gained so much traction so quickly by loudly, repeatedly and unapologetically challenging the circumstances of Obama's birth. No mainstream Republican leader has been willing to go anywhere near as far as Trump has, creating a clear opening on the right for a prominent figure to give voice to suspicions that have flourished for three years.

But, as Adam Serwer noted the other day, this is entirely a problem of the GOP establishment's creation. While leaders on the right have shied away from overtly embracing birtherism (for fear of harming their party's image with swing voters), they've also done nothing to discourage the conservative masses from believing the worst about the president. And the rhetoric they have embraced -- claiming, for instance, that Obama rejects "American exceptionalism" -- has often functioned to encourage conservatives to regard Obama as "the other," a leader who is fundamentally different from "real" Americans and fundamentally anti-American in his values. These kinds of attitudes feed birtherism, which doesn't have to be rooted in a literal belief that Obama was born elsewhere and engineered some sort of conspiracy and coverup to establish his eligibility for the presidency. Jonathan Bernstein has written what is probably the best description of this phenomenon:

In its wildest forms, birtherism is about a massive conspiracy to install a conscious, deliberate enemy of the United States in the White House. It's nice that Mike Huckabee doesn't subscribe to that. But in its more plausible, and presumably more popular forms, it's really just a way of saying that Barack Obama isn't a "real" American.

In other words, many (most?) of the nearly 70 percent of Republicans who expressed doubt in the CBS/NYT poll that Obama was born in this country may simply assume, based on all of the noise they've heard from voices they like and trust about Obama's "anti-American" values, that this is the answer they are supposed to give. It doesn't mean they've thought things through and believe an elaborate plot has been carried out, and it doesn't mean that being told actual facts about Obama's birth will sway them. (There are also, to be sure, more benign possible explanations: It could be, as HuffPo's Sam Stein points out, that some/many respondents may assume that Hawaii wasn't part of the United States when Obama was born there, or that it still isn't.)

In this sense, Trump's message may be resonating with so many Republican voters simply because it represents the most blunt and unrelenting attack on Obama's "American-ness" that they've heard from a major Republican. In other words, it may not be the specifics of Obama's birth certificate and hospital records that excite them; it's more the idea that someone so prominent is willing to stand up and take so much heat for saying, essentially, "Barack Obama isn't one of us."

It will be interesting to see how the conservative establishment responds to this. So far, as I noted above, influential leaders on the right have resisted tackling birtherism head-on, often refusing to condemn or embrace it while simultaneously playing the Obama/anti-American card. But Trump's rise to the top of some recent GOP polls -- and his ability to soak up so much media attention -- has clearly spooked this same conservative establishment. They've begun seeking to undermine his standing on the right, even (in some cases) by challenging his birtherism (as Karl Rove and Eric Cantor did, for instance). If Trump quickly fades as a result of these attacks, things will presumably go back to normal, with the GOP establishment continuing to feed its base the red hot anti-Obama rhetoric that encourages casual birtherism. But if Trump -- or someone like him -- continues to make inroads by using the birther issue, GOP leaders may be forced think long and hard about giving it a rest, before they create a monster that could hurt them in the next election.