The dark side of America's first reality show 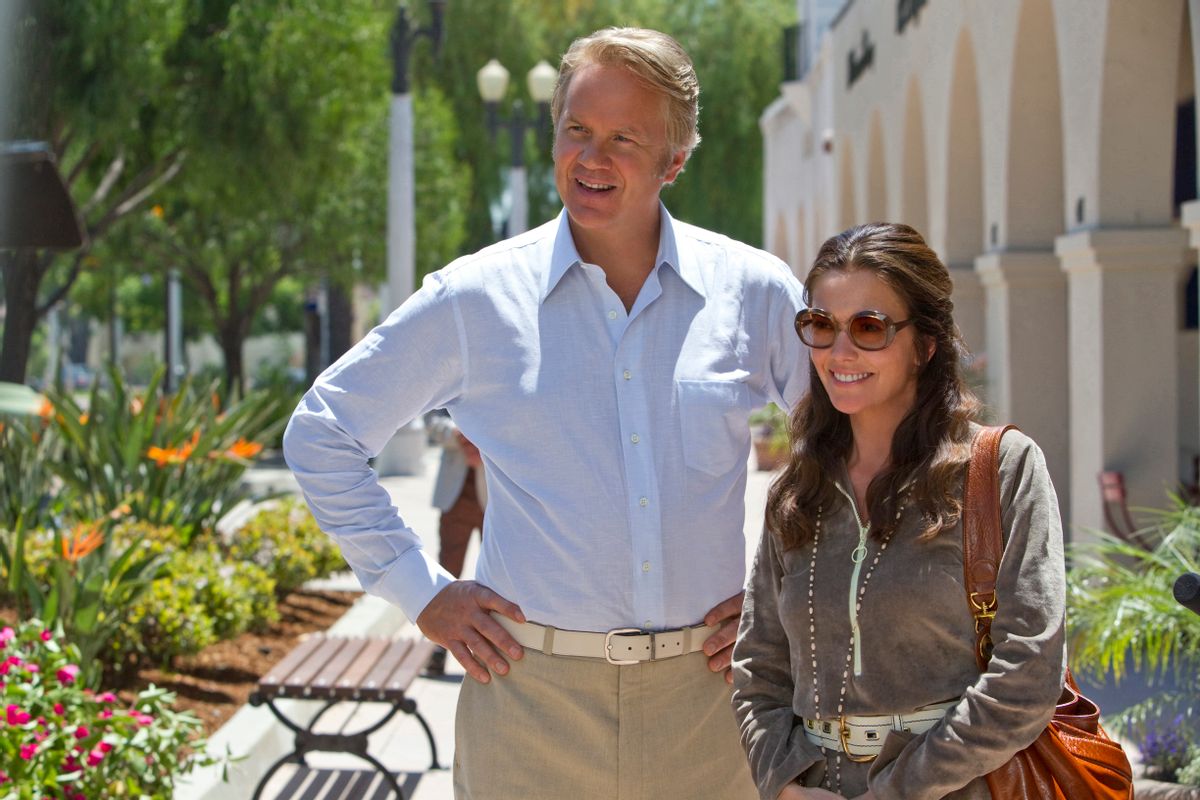 Early in "Cinema Verite," the HBO movie about the making of the landmark PBS documentary series "An American Family," the show's creator, Craig Gilbert (James Gandolfini), tries to persuade Santa Barbara housewife Pat Loud (Diane Lane) to let a camera crew film her family's daily life. "There are some people who say that when you turn a camera on things, the truth just rises to the surface," he assures her. Pat is worried about having her family life disrupted and her privacy invaded, but this soft-bellied, long-haired New York filmmaker is eloquent and sweet, and a much better listener than her husband, Bill (Tim Robbins), a serial cheater. In the end, though, it's not Craig's demeanor that sways Pat. It's something darker: the possibility that participating in the show will let her take control of an unhappy life -- or at least avenge herself before an audience of millions.

"Cinema Verite" (April 23, 9 p.m./8 Central) is filled with insights that sharp -- insights that  drama can express more subtly than journalism. I wish the movie had explored them in more depth. Written by David Seltzer ("Lucas") and directed by Robert Pulcini and Shari Springer Berman -- who made another notable fact-fiction hybrid, 2001's "American Splendor" -- "Cinema Verite" is smart and often moving, but unsatisfying overall.  It compresses seven months of shooting, 3,000 hours of raw footage, and 12 hours' worth of televised story into a little over 90 minutes, losing complexity along the way.

If you've seen all or part of the original PBS series -- which will be rerun April 30 -- you're sure to spend much of the film's running time comparing Lane, Robbins, Gandolfini and the actors who play the Loud children against their real-life counterparts, and you might arrive at the same unflattering conclusion I did: They're convincing, but ultimately nowhere near as fascinating as the real people. Even viewers who've never seen a frame of the source may intuit that a lot of essential things are missing -- that this story is just the finely buffed tip of an immense, oddly shaped iceberg.

The real-life Craig Gilbert wanted to represent a "typical" American family with merciless honesty, by recording moments you don't see represented in family albums because they're painful. "An American Family" captured a grotesque, hothouse version of that, but its true subject was incidental, and much more complex: family life as mediated (or distorted) by the camera's eye. This HBO adaptation is mainly about how Pat Loud's participation in a TV show forces her to acknowledge her unhappiness, then end it by dumping her pig husband.

All right -- to be fair, the movie isn't just about that. The filmmakers touch on other issues: the psychological effect of nonstop surveillance; documentary subjects' wildly divergent reactions to being filmed; the shock of having one's real life packaged as entertainment and then torn apart by strangers. (Albert Brooks' spoof of "An American Family," 1979's "Real Life," deals with the latter more incisively, through comic exaggeration; Brooks plays the Gilbert character as an abrasive phony who deliberately inserts himself into the family's routine, hoping to gin up the drama.) Issues of privacy and journalistic ethics get routed through the unromantic triangle of Pat, Bill and Craig. That makes sense from a scriptwriting standp0int, but it's tiresome to watch.

"Cinema Verite" is a stylish, well-meaning movie. Seltzer's script has too many on-the-nose lines and situations, but he excels at writing life-size characters who lack self-awareness.  The filmmakers find visually expressive ways to make theoretical points, especially via shots of raw footage playing out on an editing table. And the acting is strong. Lane is physically convincing as a middle-aged housewife circa 1973, and in close-up, she's brilliant. She has also put some thought into how Pat behaves on-camera versus off-camera, and how the act of performing makes Pat more assertive. Gandolfini captures Craig's self-serving, manipulative aspects while convincing you that the man is unaware of his imperfections, and in fact imagines himself as a brilliant, kindly soul who cares deeply for the people whose lives he scavenges. Robbins is the central trio's weak link, but good casting saves him. He's credible as an emotionally closed-off, middle-aged man who's charming enough to seduce uninteresting women into sleeping with him, but not smart enough to see that his wife isn't the doormat he always assumed she was.

Unfortunately, "Cinema Verite" pushes the documentary's other key players -- including several teenage Louds and Gilbert's main collaborators, young filmmakers Alan and Susan Raymond (Patrick Fugit and Shanna Collins) --  to the margins of the story. It turns the most controversial family member, Bill and Pat's openly gay son Lance (Thomas Dekker), into a supporting player. And the whole production isn't quite as penetrating, lyrical and haunting as it clearly aspires to be. "Cinema Verite" packs its most fascinating material -- the Louds' circle-the-wagons response to being publicly vilified -- into its final 15 minutes, zipping through moments as dramatic as anything the film's midsection explored in detail.  There aren't too many films you suspect would be better if they were longer. Could "Cinema Verite" be one of them? Or is the truth always stranger -- and richer -- than fiction?