When it comes to figuring out which strongmen the U.S. supports, is clothing the best predictor of all? 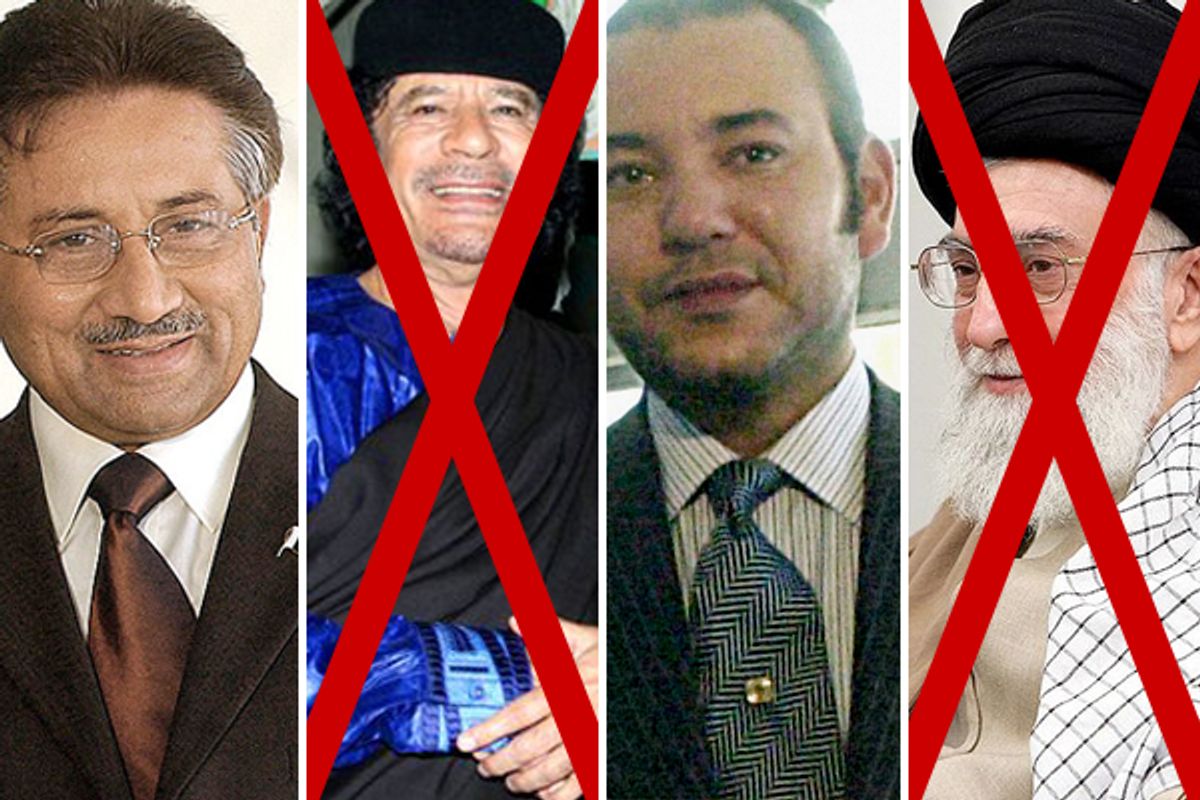 Do "the clothes make the man," as the old adage goes? Does fashion profoundly affect the world outside of your closet, as Miranda Priestly famously insists in "The Devil Wears Prada"? Judging by American foreign policy, the answer is a resounding yes.

And that's fantastic news because it's downright confusing to figure out whom we're supposed to hate and whom we're supposed to love on a day-to-day basis. The same Obama administration that has been lately lambasting Libyan leader Moammar Gadhafi had been calling Egyptian dictator Hosni Mubarak a "friend" not so long ago and continues to compliment the Saudi rulers and praise Syrian despot Bashar al-Assad as "a reformer."

So how are average Americans supposed to keep it all straight? In a skin-deep culture, we don't even have to go that deep. We can just look at clothing.

Think about our Dictator Friends -- aside from the Saudis, all of them typically dress like Western runway models, adhering to a strict suit-and-tie regimen that might be called "Brutal Dictator Chic." From Egypt's Mubarak to Pakistan autocrat Pervez Musharraf to Yemeni despot Ali Abdullah Saleh to Moroccan monarch Mohammed VI, our Dictator Friends could be mistaken for Brooks Brothers mannequins -- and some of them, like the Paris-suave Bashar al-Assad and the runway-model-esque King Abdullah of Jordan, are sure to have future careers as GQ centerfolds once their countries' revolutions inevitably exile them to Europe. Even the Saudis have their top diplomatic representatives such as Adel al-Jubeir and Bandar bin Sultan adhere to the Western dress code.

This sharply contrasts with our Dictator Enemies. While their records of human rights abuses, mass murders and civil liberties violations are all but indistinguishable from our Dictator Friends, their wardrobe is completely different.

Considering the sartorial consistency at work here, is it really a coincidence that Russia and China moved from sworn nemesis to dubious ally status at exactly the moment those two countries' regimes went from dressing like Dictator Enemies (Stalin's military costume/Mao and Deng's Dr. Evil costumes) to dressing like Dictator Friends (Putin and Hu's sweet suits)? I think not.

There is a chicken-or-egg question here: Does our government's foreign policy apparatus operate under the Kool Kids Rules of high school, choosing our friends and enemies based on how well they dress? Or do our enemies operate under the Goth Rules of high school, deliberately making defiant fashion choices as a semiotic protest against us? It's probably a little bit of both.

Dictatorship is a tricky project requiring all sorts of complex techniques of subjugation, but it typically comes down to a choice: The foreign despot either publicly justifies his reign as the purest expression of the native population against the Western Imperialist Invader (physical, cultural or otherwise), or he proudly presents himself as the long-and-strong arm of that Imperialism. Hence, the anti-imperialist dictator tends to don garments that visually reinforce the anti-imperialist narrative in the same way America's anti-Washington political candidates sport cowboy hats. Meanwhile, the Western client dictator tends to clothe himself in Western threads (a fashion dynamic that dates back to the dress codes of dictators Peter the Great of Russia and Mustafa Kemal Ataturk of Turkey).

Not surprisingly, the American government tends to despise the former and love the latter, not exactly for the clothing choices, but for what those clothing choices represent -- and the American people buy this selective distinction between Dictator Friends and Dictator Enemies, in part, because we've been inculcated by both political and pop culture to understand the distinction through clothing.

Think about how the typical Political Enemy in movies is almost always presented as some version of the over-militarized junta leader from "Iron Eagle," the 1970s disco-dancer-turned-interplanetary terrorist General Zod from "Superman II," or some version of the bizarrely dressed Cobra Commander from "G.I. Joe" -- that is, as one of the distinct styles of our Dictator Enemies. This is the portrayal not because Hollywood is part of some secret fashion-industry conspiracy to stigmatize non-Western garb, but because that clothing is the most succinct shorthand that says "Bad Guy" to the American audience.

This explains America's cognitive dissonance in seeing Gadhafi as a terrible tyrant but Assad as a "reformer" even as they both massacre their own people. Just as so many picture wifebeater-clad hoodlums rather than pinstriped Wall Streeters when they hear the word "thug," Americans easily understand a guy in sunglasses and a gold cape as Bad, and have trouble envisioning a well-dressed Parisian tourist as the same way -- even when those dictators basically represent the same thing.