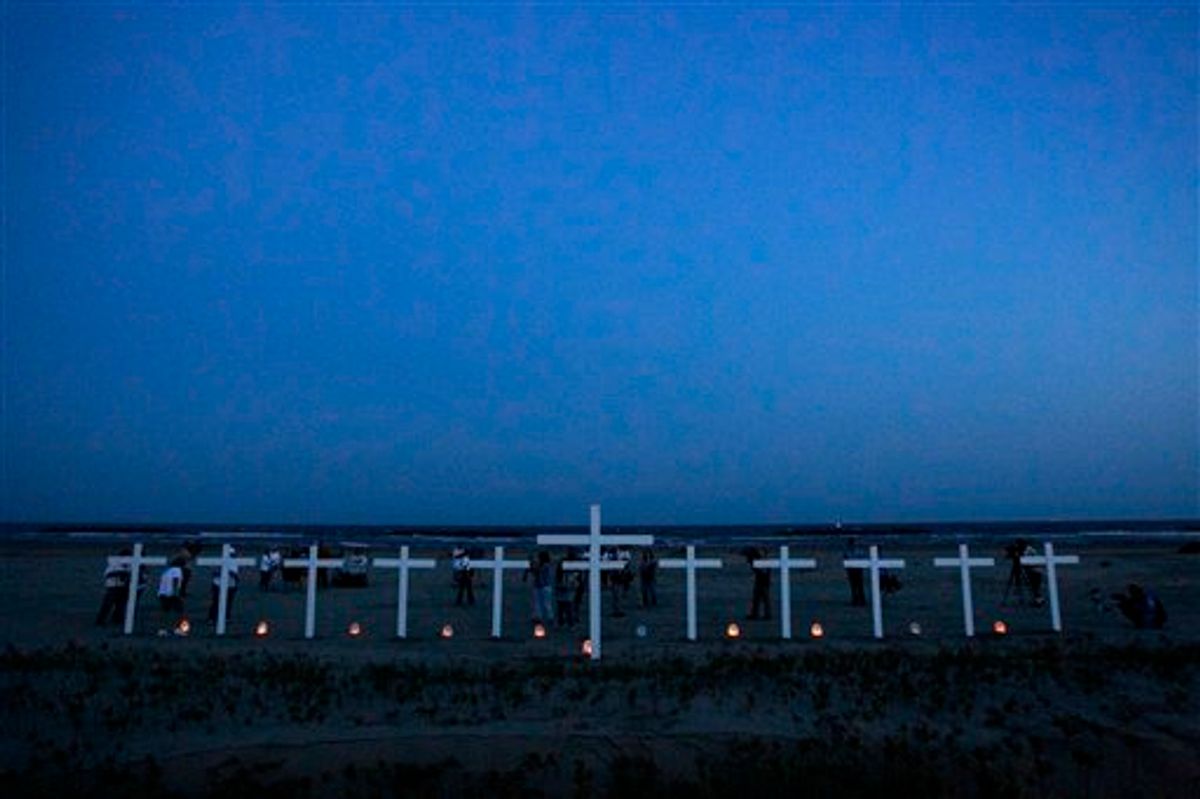 People gather near crosses -- 11 for the workers who died in the Deepwater Horizon oil rig explosion and one for the Gulf of Mexico, center -- during a vigil to mark the first anniversary of the BP PLC oil spill on a beach in Grand Isle, La., Wednesday, April 20, 2011. (AP Photo/Patrick Semansky) (AP)
--

BP marked the first anniversary of the massive Gulf of Mexico oil spill with a $40 billion lawsuit blaming the disaster on its partners, as Gulf residents held somber vigils and relatives flew over the waters where 11 oil rig workers died.

A year after the rig explosion that triggered the worst offshore oil spill in American history, President Barack Obama vowed to hold BP and others accountable for "the painful losses that they've caused."

For its part, BP filed a lawsuit alleging negligence by the rig owner and by the maker of the device that failed to stop the spill. Both of those companies filed their own claims, a reminder that lengthy court battles lie ahead.

The disaster began on the night of April 20, 2010, when the Deepwater Horizon rig burst into flames and killed the 11 men. The rest of the crew evacuated, but two days later the rig toppled into the Gulf and sank to the sea floor. Over the next 85 days, 206 million gallons of oil -- 19 times more than the Exxon Valdez spilled -- spewed from the well.

Parents, siblings and wives of the workers -- whose bodies were never recovered -- boarded a helicopter Wednesday to see the waters where their loved ones perished. The helicopter took them from New Orleans out to the well site, circled around so that people on both sides of the aircraft could see and then returned to shore, said Arleen Weise, whose son, Adam, was killed on the rig. The only indication they were at the site was an announcement from the pilot, she said.

"It was just a little emotional, seeing where they were," Weise said by phone from Houston, where rig owner Transocean planned an evening memorial service.

Asked what went through her mind when she saw where the rig went down, Weise said, "Just rise up. I wanted them to come up, but it didn't happen."

In a statement, President Barack Obama paid tribute to those killed in the blast and said that despite significant progress toward mitigating the spill's worst impacts, "the job isn't done."

"We continue to hold BP and other responsible parties fully accountable for the damage they've done and the painful losses that they've caused," he said.

BP said in its lawsuit filed in federal court in New Orleans that Cameron International provided a blowout preventer with a faulty design, alleging that negligence by the manufacturer helped cause the disaster. The suit seeks damages to help BP pay for the tens of billions of dollars in liabilities it has incurred from the disaster.

"The Deepwater Horizon was a world-class drilling rig manned by a top-flight crew that was put in jeopardy by BP, the operator of the Macondo well, thorough a series of cost-saving decisions that increased risk -- in some cases, severely," Transocean said.

Houston-based Cameron noted in a statement emailed to AP that Wednesday was the deadline under the relevant statute for all parties to file claims against each other. It said that it has filed claims of its own to protect itself.

Also Wednesday, Transocean filed court papers demanding that judgments be made against BP, Cameron and other companies in its favor.

A presidential commission has concluded that a cascade of technical and managerial failures -- including a faulty cement job -- caused the disaster. BP, the oil giant which owns the blown-out well, has paid billions in cleanup costs and to compensate victims. The company has estimated its total liability at $40.9 billion, but it might have to pay many billions more, especially if its officials were to be found criminally negligent in still pending investigations and trials. For now, though, the company has rebounded relatively well, with its stock now just 20 percent below its pre-spill value.

At a candle-lit ceremony in New Orleans' Jackson Square shortly after sunrise, environmentalists and religious leaders joined to remember the perished rig workers and call on the nation to take the steps to prevent another environmental catastrophe.

"Our souls are slumbering in moral indifference," said Rabbi Edward Cohn of the Temple Sinai in New Orleans. "People quite rightly are asking: How and when, and by whose insistence and stubborn support, will the public's mind be refocused upon what happened in the Gulf?"

Elsewhere around the world, BP employees were observing a minute of silence.

"We are committed to meet our obligations to those affected by this tragedy and we will continue our work to strengthen safety and risk management across BP," BP chief executive Bob Dudley said in a message on the company's website. "But most of all today, we remember 11 fellow workers and we deeply regret the loss of their lives."

The solemn ceremonies underscore the delicate healing that is only now taking shape. Oil still occasionally rolls up on beaches in the form of tar balls, and fishermen face an uncertain future.

Louis and Audrey Neal of Pass Christian, Miss., who make their living from crabbing, said it's gotten so bad since the spill that they're contemplating divorce and facing foreclosure.

"I don't see any daylight at the end of this tunnel. I don't see any hope at all. We thought we'd see hope after a year, but there's nothing," Audrey Neal said.

His wife said the couple received about $53,000 from BP early on, but that was just enough money to cover three months of debt. They haven't received any funds from an administrator handing out compensation from a $20 billion fund set up by BP, they said.

Still, there are some signs that normalcy is returning. Traffic jams on the narrow coastal roads of Alabama, crowded seafood restaurants in Florida and families vacationing along the Louisiana coast attest to the fact that familiar routines are returning, albeit slowly.

The state banned anglers from keeping their catch off the pier last year because of the oil, but coolers were full of big redfish and king mackerel on Wednesday.

"People will be back. It's pretty down here, and it's good to be out here," said Williams, of Daphne.

Members of 10 Alabama churches gathered on a public beach in Orange Beach, Ala., during a daylong prayer vigil. As families played in the surf and BP cleanup workers scoured the beach a few miles west for tarballs, Abe Feingold sat under an awning with friends and said a prayer.

"It's for BP not to forget us," said Feingold, of Orange Beach. "If they keep reimbursing people, we'll recover."

Most scientists agree that environmental damage wasn't as bad as some predicted, said Christopher D'Elia, dean at the School of the Coast and Environment at Louisiana State University. But biologists are still concerned about the spill's long-term effect on marine life.

Accumulated oil is believed to lie on the bottom of the Gulf, and it still shows up as a thick, gooey black crust along miles of Louisiana's marshy shoreline. Scientists have begun to notice that the land in many places is eroding, and plants have been damaged.

Louisiana Gov. Bobby Jindal said more than 300 miles of Louisiana coastline continues to see some BP oil. He was joined by the presidents of six coastal parishes for a commemoration on Grand Isle, a coastal barrier island that took major impact from the oil

Earlier Wednesday, Ted Petrie, back from his first shrimping run since the spill, docked his boat at the Grand Isle marina.

He said he worries about the Gulf fishing industry's long-term prospects. That's why he is opting to pursue his claim against BP in court rather than settle for a quick payout from the company's fund, as many of his fellow fishermen have done.

Still, he said he's grateful to be back on the water doing the job he has done for 40 years. He hauled in about 2,000 pounds of shrimp in three days, enough for a modest profit.

Seventeen family members, one Transocean official and two pilots were aboard the chopper that flew the families to the site for the three-hour round-trip. Transocean had invited up to three members of each family to attend the flyover, but some families declined.

Janet Woodson, whose brother Aaron Burkeen was killed on the rig, also was on the helicopter ride.

"It was OK, but sad even though there was nothing there," she told the AP.