Americans have succumbed to this fantasy before: Lower taxes! More revenue! Prosperity for all! 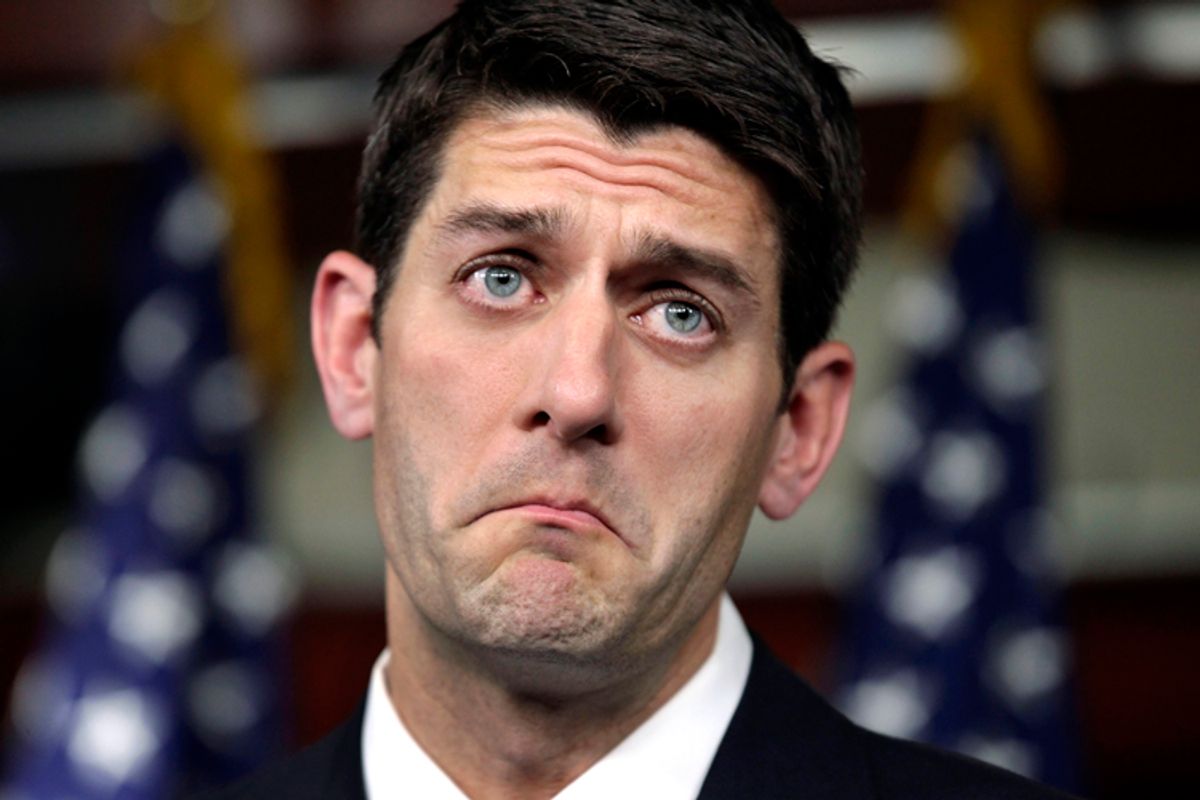 And here I thought the GOP was supposed to be the He-Man party. The party of tough choices, masculine resolve and facing the music. So President Obama invites a few Republicans for some straight talk about the budget deficit and what happens?

OK, that's a paraphrase. The reportedly "furious" Ryan complained to PBS' Charlie Rose that Obama's budget speech "was extremely political, very partisan." An anonymous GOP aide told the Washington Post that the sainted Ronald Reagan "had the decency to insult his enemies when he was out of town."

Yeah, well, where I come from, people have more respect for somebody who says it to your face instead of behind your back. As for partisan, here's the first sentence of altar boy Ryan's scheme to balance the budget over 35 years by privatizing Medicare and cutting billionaire's taxes: "Where the president has failed, House Republicans will lead."

Elsewhere, Ryan accused the "president and his party" of exploiting economic hardship to indulge in a "reckless spending spree."

So Obama provided him a first-person history lesson. "America's finances were in great shape by the year 2000," he said. "We went from deficit to surplus. America was actually on track to becoming completely debt-free, and we were prepared for the retirement of the baby boomers.

"But ... we lost our way in the decade that followed. We increased spending dramatically for two wars and an expensive prescription-drug program -- but we didn't pay for any of this new spending. Instead, we made the problem worse with trillions of dollars in unpaid-for tax cuts ...

"And so, by the time I took office, we once again found ourselves deeply in debt and unprepared for a baby-boomer retirement that is now starting to take place. When I took office, our projected deficit, annually, was more than $1 trillion. On top of that, we faced a terrible financial crisis and a recession."

These are indisputable historical facts. To Republicans like Ryan and the carnival-sideshow performers seeking the 2012 GOP presidential nomination, however, mere reality is out of bounds. To resort to facts is to play the "blame game," a formulation seductive to simpletons essentially because it rhymes.

Then, after Ryan expressed his hurt feelings, Obama gigged him with the old open-microphone trick. Reporters overheard him during a supposedly unguarded moment: "When Paul Ryan says ... he's just being America's accountant ... This is the same guy that voted for two wars that were unpaid for, voted for the Bush tax cuts that were unpaid for, voted for the prescription-drug bill that cost as much as my healthcare bill -- but wasn't paid for."

Mommy, he's picking on me!

See, that's the thing about these disciples of Ayn Rand, the bad novelist deeply appealing to insecure adolescents who dream of greatness because they're acing ninth grade. Unlike those of us drawn to John R. Tunis at an equivalent age, they never had to come to terms with their inability to hit a curveball.

So the magical thinking goes on forever. After their 30-year War on Arithmetic, these jokers have persuaded themselves that the current crisis enables a kamikaze attack on the 20th century.

Republicans, writes Rolling Stone's Matt Taibbi, "recognize that there is great political hay to be made in the appearance of deficit reduction, and that white middle class voters will respond with overwhelming enthusiasm to any call for reductions in the 'welfare state,' a term which said voters will instantly associate with black welfare moms and Mexicans sneaking over the border to visit American emergency rooms.

"The problem, of course, is that to actually make significant cuts ... one has to cut Medicare and Medicaid, programs overwhelmingly patronized by white people, and particularly white seniors."

Hence President Obama none too subtly reminding his invited Republican guests who's got the power: "They want to give people like me a $200,000 tax cut that's paid for by asking 33 seniors each to pay $6,000 more in health costs," he said. "That's not right. And it's not going to happen as long as I'm president."

Me, I blame Bill Clinton. No zipper malfunction, no President George W. Bush, no Bush tax cuts, no 2011 budget crisis. It's that simple.

But I digress. Having decoyed the GOP into overplaying its hand, Obama can't let voters forget it. Americans have succumbed to this fantasy before. Lower taxes, more revenue! Prosperity for all! What could possibly go wrong? And that handsome Mr. Ryan seems so sincere on television.

No retreating into the White House Fortress of Civility. The president's got to go into quasi-campaign mode, repeating the message until all but the most easily duped understand that they've been swindled by the proverbial deal that was always too good to be true.